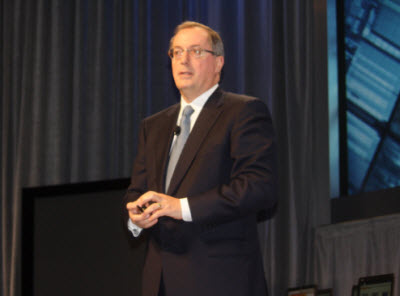 Still, Intel hasn’t completely given up. Chief executive Paul Otellini said, in response to a question today at the company’s analyst meeting, that Intel still has as many engineers working on its Larrabee graphics platform today than it had six months ago.

Back in December, Intel announced that it had decided to scrap the commercial launch of Larrabee, which had dozens of processing cores on a single chip, all for processing 3D graphics. It was an ambitious multi-year project, and Otellini said that some people in the company started talking about it too early. It just wasn’t fast enough to beat the competition.

The fact that Intel still has chip design engineers working on graphics technology shows that Nvidia and AMD shouldn’t feel all that comfortable. Intel is still chasing after them.

Intel meant Larrabee to exist as a companion to its microprocessors in a computer. It was to go head-to-head against Nvidia and AMD. While Intel scrapped that plan, it did say it would continue to offer Larrabee as a software development platform. That meant it would let game developers and others play around with it and let them learn how to make software for it.

The ostensible purpose for keeping Larrabee alive is that Intel hopes a future version of the design might prove to be fast enough to beat rival graphics chips. And Intel might still want to pitch the chip as its primary component for a future video game console. (Rumors abounded that Larrabee would be the graphics chip in a PlayStation 4, but that was never confirmed). The game console makers don’t appear to have plans to launch consoles anytime soon. But the conversations between chip makers and console makers have to get going years in advance of the launch of a new console.

Back in December, Intel said it would have more to say about Larrabee in 2010. But it hasn’t tipped its hand yet. Still, Otellini said, “We are trying to determine the right time” to start talking about the latest efforts with the Larrabee architecture and when to introduce it into the market.

Meanwhile, Intel said that it is making good progress on chips that combine both a microprocessor and (a somewhat less capable) graphics chip on a single chip. The company’s Atom microprocessor platform — targeted at portable electronics and smartphones — will likely be the division to make the most use of the combo graphics-processor chips. That “integrated graphics” combination, coming up in a platform called Sandybridge, is so powerful it is likely to be renamed more formally, Otellini said. And in smartphone chips, Intel uses graphics technology that it licenses from Imagination Technologies. But stay tuned for Intel to talk about its more ambitious graphics chips — perhaps the son of Larrabee — in the future.

[Update: Otellini was asked the question again. He said, “In terms of Larrabee, we did not stop the project. If we made a mistake, we shouldn’t have talked about it. It still has high promise in throughput computing. In terms of general-purpose computing with small Intel Architecture cores, we still like the idea.”]