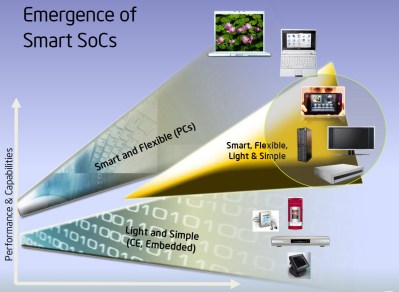 Intel is preparing to talk about a bunch of research advances at a chip engineering conference next week. The advances range from a new microprocessor with 2.3 billion transistors on a sliver of silicon to a shift toward a new kind of thinking about how to integrate lots of electronic circuits on one chip.

The company will present 15 papers at the International Solid State Circuits Conference — an annual geekfest of chip scientists and engineers — running from Sunday through Thursday in San Francisco. Mark Bohr, a senior fellow at Intel, said that the company is thinking differently about how it makes use of Moore’s Law, the observation by Intel co-founder Gordon Moore that the number of transistors on a chip doubles every couple of years.

In the past, Intel would use manufacturing advances to shrink the physical size of transistors so that more of them could fit on a chip. Chip designers would then load up more transistors on as large a chip as possible. That is how Intel created its new 45-nanometer Nehalem-EX chip, which has 2.3 billion transistors. Intel’s first microprocessor in 1971 had only about 2,300 transistors. 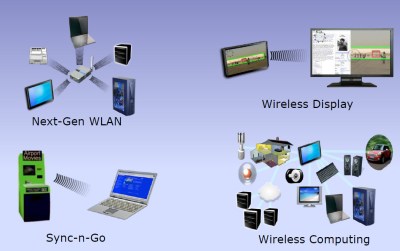 Intel used to use its leading-edge manufacturing technology to exclusively make high-end microprocessors. But now Intel is also designing systems-on-a-chip, which integrate many chips into one piece of silicon, in a way that allows for better mobile functions and energy efficiency. That means packing transistors into a given space as efficiently as possible.

Intel has been talking about this for some time but now the “system on a chip era” — with a focus on purpose-built chips rather than general-purpose chips — is more believable. In the coming years, Intel will be able to put hundreds of millions of transistors on systems-on-a-chip devices. The Santa Clara, Calif. chip maker will illustrate the point with chips that include multiple radios integrated into one chip. It will also use its advanced manufacturing technology to put better graphics on mobile chips with less than a tenth of the power of current devices. Those devices will be used in much smarter consumer electronics devices and smaller and more flexible computers.

To Intel’s rivals, this will sound like a lot of bluster. Everyone has come to expect such advances not only from Intel but from other big chip makers as well. But the research is interesting because the scientific papers are a signal of what is likely to be achievable in real products within a few years. The various pictures on this page suggest what could be done with the faster and more power-efficient chips. The good thing about ISSCC presentations is that they have to be rooted in reality; papers are often based on prototypes that have been created in engineering labs.

Intel researchers will present three papers related to squeezing more radios, which normally require separate chips due to interference, onto one chip. Such chips could handle the processing of Wi-Fi, WiMax, 3G, Bluetooth and a more difficult 60-gigahertz radio onto one chip, much as “software defined radio” startups such as Sandbridge Technologies plan to do. The 60-gigahertz technology can be built into a wireless data chip that can transfer data at five gigabits a second, or enough to transfer a DVD movie in 10 seconds.

Intel also has research on mobile graphics chips that can bring much more realistic 3-D graphics and high-quality video to mobile devices.