Intel said that the fundamental progress of the chip industry, which underlies everything electronic, is still on track and that it is still the leader in chip manufacturing technology.

The world’s biggest chip maker runs its business on Moore’s Law — the prediction in 1965 made by Intel chairman emeritus Gordon Moore that the number of transistors on a chip will double every year. And at an event in San Francisco, Intel executive vice president Stacy Smith said that Moore’s Law is on track as the company moves to 10-nanometer manufacturing, where the width between circuits is 10 billionth of a meter.

“Our cost per transistor is coming down at a slightly faster rate than historical,” he said. “Moore’s Law is alive and well. We are taking bigger steps. We have a three-year lead over the industry.” 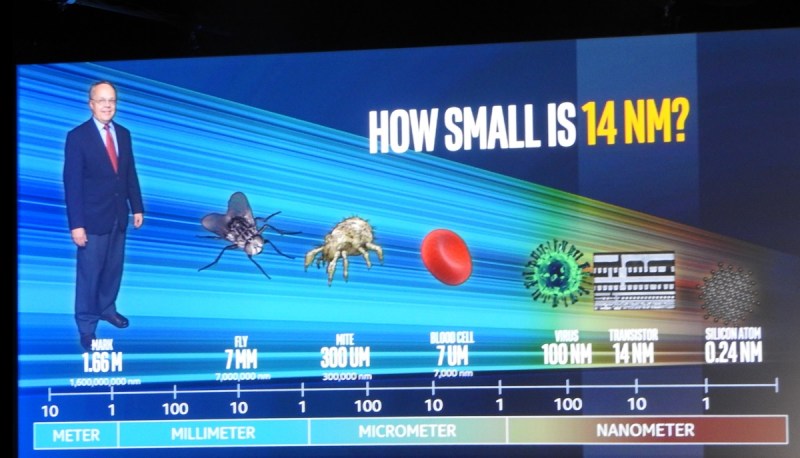 The chip industry has been on the metronome of Moore’s Law for decades, and that progress has delivered computing power in a smartphone that once took a whole room of computers. Smith said that if every industry had moved forward on the same line as the chip industry has, we would be able to travel to the sun on a single gallon of gas, feed the world’s population on a square kilometer of land, and travel at 300 times the speed of light.

Qualcomm has previously announced it was using a 10-nanometer manufacturing process, created by Samsung, for its new Snapdragon 835 processors. But Intel believes that it has the most advanced chip manufacturing in the world and that it is a generation ahead of its rivals.

A nanometer is a billionth of a meter, and it only takes four silicon atoms in a crystal lattice to make one nanometer. In a 10-nm process, the circuits are only 10 nm apart. A virus is about 100 nm in length.

Smith, who’s the executive vice president of manufacturing, operations, and sales, said at the press event that Intel hasn’t lost its lead. Rather, he said that the new 10-nm process from rivals is equivalent to Intel’s 14-nm process introduced three years ago.

Mark Bohr, Intel senior fellow, said at the event that the density of transistors that rivals can pack in a 10-nm chip the same number of transistors as Intel can in a 14-nm chip. Intel is planning on delivering “true” 10-nm chips later this year. This essentially means that Intel has a 30 percent cost advantage at any given time.

“They can give it whatever node name they want, and we can agree that node names have lost their meaning,” he said.

It costs about $10 billion to build a brand new chip factory. To equip a modern factory with equipment, it takes about $7 billion in investment in equipment. Over the past five years, Intel has invested $50 billion in manufacturing.

A decade ago, there were 18 companies that had a leading-edge chip factory, Smith said. Now there are only four: Intel, Global Foundries, Samsung, and TSMC.

“We are pleased to see competitors following our lead with the introduction of low-power 22nm processes. Almost two years ago, we launched our 22FDX FD-SOI technology for wireless, battery-powered intelligent systems,” said Alain Mutricy, an executive at Global Foundries, in a statement. “We chose FD-SOI over bulk planar or FinFET because it provides the best combination of performance, power and area for these applications. Our process is fully qualified for production and we are seeing strong customer demand, with more than 50 active engagements in high-growth areas such as mobile, IoT, and automotive.”