The economics of Moore’s Law for Intel are solid. Investors can breathe a sigh of relief.

That’s the word from Bill Holt, executive vice president of technology and manufacturing at the world’s biggest chip maker, speaking at the Intel investor day at the company’s headquarters in Santa Clara, Calif.

Moore’s Law, formulated in the 1960s by Intel chairman emeritus Gordon Moore, predicts that the number of transistors on a chip will double roughly every couple of years. That prediction has held true for decades, and it has been the metronome of economic progress as chips get smaller, cheaper, faster, and more efficient. It enables much better, faster, smaller and cheaper tech products, and it has allowed miniaturization to proceed so that the gap between circuits is now only 14 nanometers, or 14 billionths of a meter.

On 14-nanometer production, yields have been difficult and are behind where Intel wanted to be, Holt said. But yields are improving. Cost per transistor is difficult to maintain at a constant level, but progress is promising. Intel is ahead of competition such as Samsung or TSMC, Holt said.

“14nm is harder than we thought, but we do not see a long-term difference in what we were able to see in the past and what we can achieve in the future,” he said. “We saw good results on 14nm and project good results on 10nm.” Intel can see its path through 7nm production, Holt said. 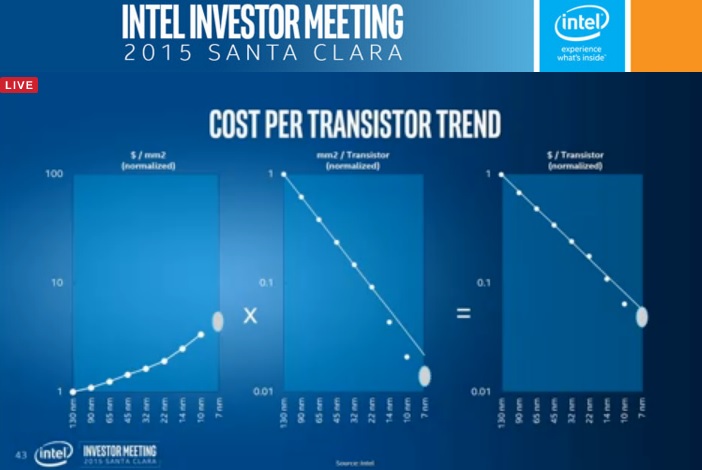 Above: Cost per transistor is rising, but Intel is scaling its shift to new manufacturing tech faster.

But this sort of change is not affecting Intel’s outlook. Brian Krzanich, chief executive of Intel, said that Intel will be able to achieve its growth targets even as demand for PCs declines. That’s because Moore’s Law will enable the company to improve products for other growth markets such as data center computers, the Internet of things, and memory products.

“Clearly, it’s getting harder and harder to grow,” said Linley Gwennap, founder and principal analyst at the Linley Group. “They have some pretty aggressive targets and it shows they are making real progress. They have a pretty good idea of what they will do at 7 nanometers. The cycle times were at two years. Then it was two years and a quarter. Then it was two and a half years. More likely it’s going to go to three years between generations.”

Intel is focusing on a lot of different options for extending progress in making chips of the future. They include nanowires, Tunnel FET, III-V materials, spin-based tech, flexible and stretchable materials, system integration, 2D materials, qubits, quantum computing, sensors and actuators, high-voltage radio frequency, directed self-assembly, and other techniques. Holt said the ideas are credible but he doesn’t know which one will take hold.

“The days of very simplistic scaling are long over,” he said. “The only way you can drive progress is significant innovation.”

As for ten years out, the future is fuzzy, Holt said. Fewer companies will be able to afford the R&D for the task. But there are a lot of technologies in the works.

“There’s an increasing cost to R&D, but it’s not the thing that will stop us from pursuing Moore’s Law,” Holt said. 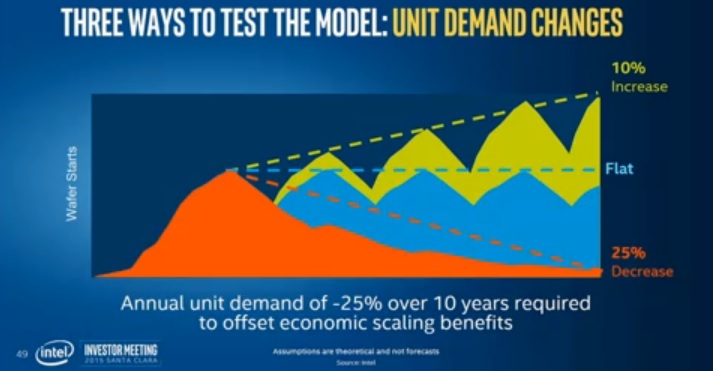 Above: This chart predicts that Intel will still be able to deal with rising chip costs.