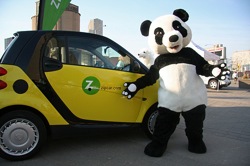 A bit of a kerfluffle has sprung up around car-sharing service Zipcar, and whether Bloomberg misquoted chief executive Scott Griffith that he’s planning an initial public offering for 2010. You’d think it would be a relatively easy dispute to settle, but there’s no clear answer yet.

The Bloomberg article in question was published yesterday, and while it provides a wide-ranging view of the car-sharing service’s success (for those of who don’t know what Zipcar is, think of it as a car rental service for everyday life, with shorter rental times, online reservations and a more distributed fleet), the article’s very first sentence is about the IPO: “Zipcar Inc., the world’s largest car-sharing company, is gearing up to publicly sell shares in 2010 as it fends off rivals such as Hertz Global Holdings Inc.”

The Deal published a response today, quoting Zipcar spokeswoman Nancy Scott Lyon: “We did not announce an IPO and have no immediate plans to go public.” The article then takes a dig of its own: “Bloomberg’s attempt to wring a bit of news out of an apparently boring interview with Zipcar CEO Scott Griffith makes it clear the traditional news outlets are often just as guilty of churning out nonsense as the user-generated content, blogs and tweets they fear.”

That’s it, right? Someone was misquoted, happens all the time, whatever. Actually, no! There’s a new twist — Bloomberg told Clusterstock: “We have the Zipcar CEO ON TAPE saying that IPO is absolutely ‘the right outcome for us.’ When asked when, he said ‘2010.’”

So, uh, what the heck is going on? I’ve emailed both Zipcar and Bloomberg for comment and haven’t heard back yet, and it’s quite likely they’d just repeat what they’ve said already. I did ask Bloomberg if it plans to release the tape recording or transcript, so we can get some broader context for what Griffith said. For now, we only have isolated quotes, and Griffith’s only IPO-related quote in the Bloomberg article is that an IPO would be “a way for our shareholders to get an exit.” Not exactly revelatory.

Hopefully this will be straightened out soon. For now, it’s hard to tell what’s true — Bloomberg may have built an inaccurate story around a few noncommittal quotes, or Griffith may have said something he shouldn’t and is trying to backtrack.