Jajah, a Mountain View VoIP start-up that began offering free phone calls in June, has gone one better. It is now allows free calls from your mobile phone.

It just launched the service at DEMO.

Jajah is a scrappy, quirky company. It can, without warning, cut off calls if you talk too long. But Jajah may be one to watch nonetheless — because it works so simply and for free. And it is raking in the dough, and looks to be profitable. It may even be looking at IPO prospects soon, if you believe their numbers.

We wrote about Jajah here. Until now, Jajah has let you dial your call from a PC. It puts through the call by doing the following: Jajah calls you back on your land-line, you pick your phone up, and voila, you find it connecting you to your friend across the country, or wherever you called.

Now, you can make free calls from your mobile phone, regardless of whether it has a browser or you have to rely on its SMS or some other interface. It lets you talk for free as long as the person on the other end is registered. If not, you pay low rates.

The bugs we experienced with the service a couple of months ago appear to be fixed. But the company is still cutting people off if they talk for free too long, he conceded. He said Jajah is looking for the best way to warn customers that their call is nearing an end. They still don’t have a clear policy for when that cut-off point is — an example of how the company seems to get away with things by offering an otherwise useful service.

It makes money by allowing you to make scheduled calls at specific dates and times. It also allows you to text message your contacts for five cents. The conference calling is simpler and more compelling than most other services we’re aware of. You simply enter the numbers of the people you are calling (up to ten people), click a single button, and presto, it is calling. Moreover, you don’t have to be on your computer, because, as described, it connects you with your phone. It costs 2.5 cents a minute for each connection. So if you have four people on the line, that’s 10 cents a minute — or $6 an hour. That’s far cheaper than most other services we know.

Jajah’s Scharf says Jajah’s network architecture is more distributed than Skype’s, having servers in multiple areas of the globe, allowing it to pay only for local voice calls (via the “last mile”) after routing the rest of the call through the Internet. The company’s technology transfers voice to Internet Protocol and back to voice again.

He says the company’s goal is to become everyone’s “second” phone service. It can only work if people have a primary phone account. He says Jajah is about to hit one million paying users any day now — which is impressive when you consider the more mature leader Skype has only 1.7 million total paying users.

With $10 per month in revenue on the average user, and assuming it can get to a steady one million paying users a month, that means the company could soon be raking in more than $100 million a year — which is IPO territory. It has margins of $3 per month per user, so it may soon be profitable too (though we don’t know what its up-front fixed costs are). The company has 50 employees.

Scharf has a good story about how he got the venture backing from Sequoia Capital. Heavy-hitting Sequoia venture capitalist Michael Moritz (who backed Google and Yahoo) was sitting in an airport next to someone who was using Jajah’s prototype VoIP service. Impressed, Moritz put out a search to find the company. Somehow, Moritz’s team got mixed up and thought the company was based in Australia, and looked for the company down under, before realizing that Jajah was really based in Austria, Scharf said. Moritz’s team liked the company so much, they decided to fund it even though at the time Sequoia’s bylaws didn’t allow for a European investment. Sequoia was motivated to alter its statutes to be able to make the investment.

However, European firm 3i almost stole the deal. They were talking with Jajah first, and had made an offer. Sequoia had come along and shown its initial interest, but the firm unexpectedly hesitated for several days, forcing Jajah to accepted the 3i offer, Scharf explained. Scharf later heard that Moritz had assumed Jajah was bluffing about having an offer from 3i in order to force Sequoia’s hand. When Sequoia found out the deal had actually been signed, its partners were stunned, Scharf said. “There was silence on the phone,” he said. However, Scharf was later able to cite a 60-day right-to-rescind clause in the 3i deal, and accepted the offer from Sequoia instead. 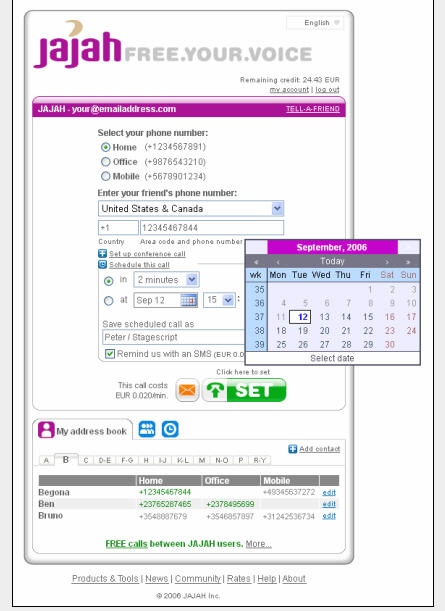