Jaunt made its name as a creator of 360-degree videos and cinematic VR experiences. But under new management, the company has shifted its focus to supplying mixed reality technology to other companies. Today, it‘s showing off some of the cool research it has been doing in volumetric capture, such as creating 360-degree digital avatars for augmented reality applications.

I tried it out at Jaunt’s headquarters in San Mateo, California, and it was quick and seamless. Jaunt demonstrated how it can capture a 360-degree image of a person with six Intel RealSense depth cameras. Jaunt stitches the images from the cameras into a single 3D avatar, and then inserts the avatars into augmented reality streams that can be sent to mobile devices in real time. I saw how they could capture me instantly and turn the data into a shareable image in no time.

The new AR volumetric capture selfies will eventually be part of a growing XR platform, a business-to-business software solution that Jaunt licenses to its partners, who distribute augmented, virtual, and mixed reality (collectively known as XR) content through their own applications and channels. Jaunt is formally launching the volumetric capture technology on its platform for customers in the fourth quarter.

“Our objective is to make streaming of experiences like this very easy and portable,” said Arthur van Hoff, chief technology officer and founder of Jaunt, in an interview with VentureBeat. “We have been strong in 360-degree video and immersive content for VR, and now we are figuring out what we can contribute for AR experiences.”

Jaunt still has a big VR film studio in Santa Monica, California, where it puts to use its expertise in telling stories in XR. In the past, it has launched more than 350 productions, including numerous virtual reality films. But today, the company only starts work on a VR film if a partner pays it to do so. 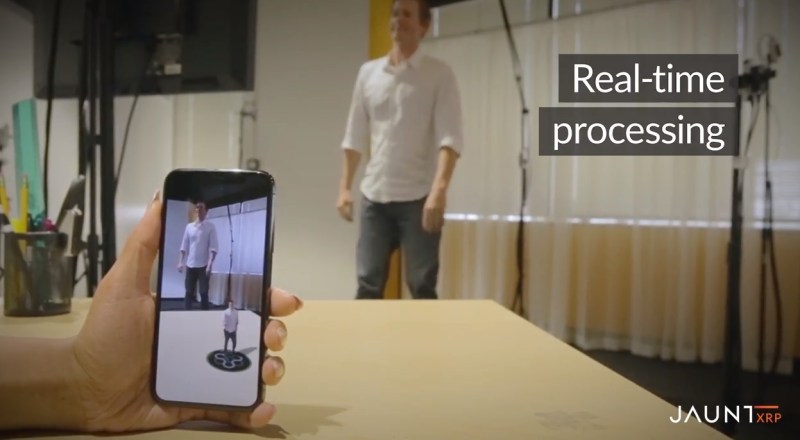 Above: Jaunt’s AR avatars can be created in real time.

“We want to be the global partner of choice for producing and distributing immersive content,” said Jaunt CEO George Kliavkoff, in an interview with VentureBeat. “In the past, we were consumer-focused. We wanted to be the Netflix of VR and have people come to a Jaunt-owned and operated site. We have repositioned as a business-to-business company.”

With the 360-degree selfies, Jaunt offers volumetric content as another medium for its partners to tell stories and create intellectual property. Volumetric capture (as captured through the six-camera rig) makes it possible to film a subject from a 360-degree perspective, then output an avatar that matches the subject’s appearance, movements, and vocals in the form of a shareable, to-scale, augmented reality asset.

Instead of an expensive green screen studio, Jaunt uses a simple capture stage with a streamlined setup and leverages the same streaming technology it developed for delivering high-quality VR and AR experiences. The ease of use and established distribution tools are ideal for companies looking for an efficient way to add cutting-edge immersive content to their media strategies. The stage is pretty portable, considering what it can do.

“We wanted to be able to process content in real time, not in weeks, and make it portable and shareable,” van Hoff said. “I recorded a 3D capture of my parents when they were visiting from Holland. That’s kind of special, as that’s something I’ll never forget.”

Jaunt’s investment in R&D signifies the company’s focus on building business-ready solutions for creating and sharing next-generation immersive content. Other initiatives in the pipeline include immersive content driven by machine learning and technologies foundational to enabling premium XR experiences.

Since 2013, Jaunt has been on the leading edge of immersive content, quickly becoming the premier producer and distributor of consumer cinematic VR by creating an end-to-end pipeline for creating and delivering VR experiences. But the VR market for consumers didn’t materialize in the way everyone hoped after the launch of the first major VR headsets, such as the Oculus Rift and the HTC Vive in 2016. 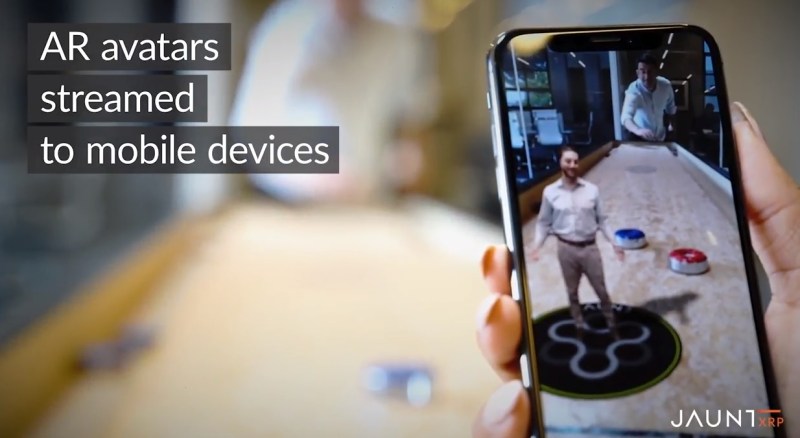 Above: Jaunt’s AR avatars can be streamed to mobile devices.

“Some analysts say XR is a $120 billion opportunity in 2021,” said Kliavkoff. “We believe in the size of the market, but we’re not sure if the analysts are correct on the timing. In the long run, we think AR is the bigger opportunity.” So in 2016, Jaunt hired Kliavkoff, a former Hearst executive, as its CEO. And he has steered the company beyond the consumer VR space, transforming it into a B2B-focused company that helps partners deliver new forms of XR content spanning augmented, virtual, and mixed realities.

“Standing as one of the early, major players in the virtual and augmented reality space, we’ve taken our consumer-facing technology and storytelling capabilities and made them available to our partners,” said van Hoff. “Our B2B focus addresses a need for companies to be able to deliver AR and VR, and we see our XR Platform’s real-time volumetric capabilities as yet another avenue for them to share engaging stories through their own channels. It’s just one of the ways we’re continuing to push the boundaries of XR content at Jaunt.”

The new Jaunt XR platform debuted in December 2017, and it can be put to use in a variety of ways. Sky broadcasting was the first customer announced for the Jaunt XR Platform at the end of 2017. Now customers include Diageo and NTT Data. The Jaunt XR Platform allows augmented reality assets, virtual reality content, and 2D assets to be delivered across devices and live side-by-side with existing media libraries.

In the past, all the VR, AR, and mixed reality formats had different technology chains, but Jaunt has united them so they can all be viewed through a single player.

“This technology platform is that single solution for managing all the different media types and playing them back holistically inside of one system, rather than having to build them separately,” said David Moretti, vice president of corporate development and operations, in an interview.

In 2017, Jaunt also opened an office in Shanghai, which allows it to distribute content in China through a partnership with Shanghai Media Group and China Media Capital.