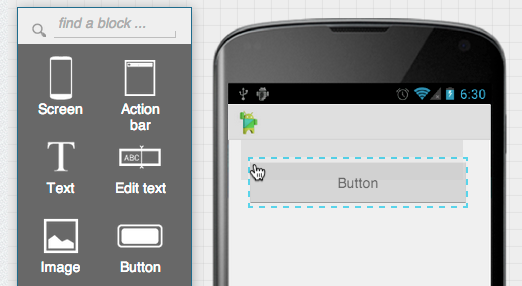 There are a ton of app-building tools available today, and most of them build crappy apps that consume content feeds, force you to use standard, templated layouts, and keep you tied to a hand-holding but straitjacketing development tool.

That’s not the goal of Jimu, a new rapid development tool for Android apps that’s currently fundraising via Kickstarter.

“We want to make it possible for a lot more people to create apps,” Jimu founder Linkton Ye told me yesterday via Skype. “Everyone should be able to play with the software that surrounds us.”

But Ye doesn’t want to just build a framework for the n00bs: those of us who can’t program in Java and build our own apps. That’s part of the goal, but not all of it. The rest of it is all about those software developers who are already building Android apps today and dealing with the surprisingly repetitive and challenging tasks for each and every app they build.

The challenge lies in the fact that while there are many great tools and frameworks to help non-developers build apps — Andromo, AppyPie, AppsGeyser, and TheAppBuilder come to mind   —  they tend to be a little cookie cutter. Pick a style, select some features, choose a content feed, subscribe to Twitter updates, import a photo stream.

“We want to give everyone a jumpstart to create apps, but still leave room for developers to customize however they want,” Ye says. “There’s a lot of frameworks to let non-developers create apps, but it’s just a form to fill in. All their apps look pretty much the same, and you can’t customize very much.” 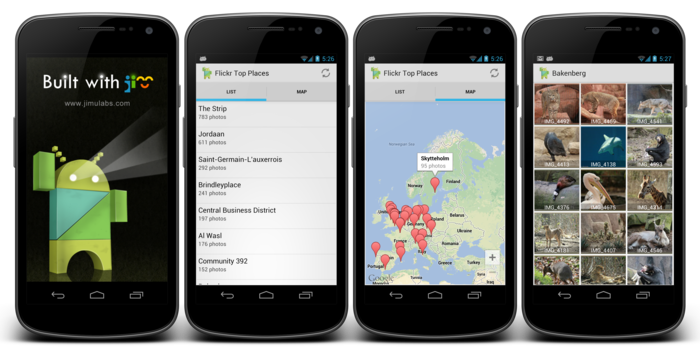 Above: One app already built in Jimu that integrates Flickr, Google Maps, other web services, and local caching.

So Jimu not only enables drag-and-drop creation of app functionality, it also creates clean, commented source code for all your apps … which those with a technical bent can then take and customize or extend even more. At a minimum, then, it’s a rapid prototyping tool that actually works, rather than being a clickable model, a wireframe, or a set of screenshots.

Jimu does this by via what Ye calls “blocks:” chunks of code that insert objects like pictures, text, buttons, and actions. The framework is extensible, and the team is building new blocks continuously. Besides the basic necessities of an app, some of the higher-level ones include the ability to take a picture with the phone’s camera and use the image, the ability to connect to other devices via NFC, and the ability to take over a phone’s Bluetooth connection.

But it’s still early days in the project — hence the Kickstarter campaign.

“We wanted to see how many people are actually excited about this idea,” Ye told me. “Right now it’s a prototype, and we want to build a minimum viable product, so this is this is basically marketing research, and it will provide some capital to fund the project.”

Assuming the Kickstarter works, Ye thinks they’ll have enough capital to finish the product. And having a successful fundraiser in his back pocket will help Jimu find additional funding. The ultimate goal is a subscription-based service by which developers who want to use Jimu pay for one or more tiers of service … and a programming blocks marketplace where developers who create a useful block can re-sell it to other mobile programmers.

Will the project get funded? Ye is optimistic.

“There are a lot of hardware and game companies doing well on Kickstarter,” he said. “For software it’s harder … but we still think it’s possible.”

Disclosure: one of the members of the Jimu team, Aras Balali, is a member in my coworking space.