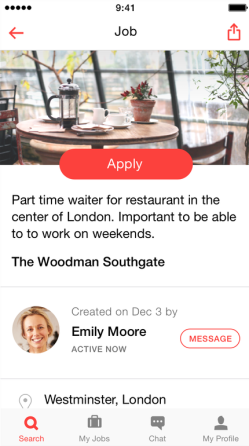 Founded out of Luxembourg in 2015, Job Today raised its first tranche of funding back in January this year, a $10 million round led by Accel. At the time, Polina Montano, cofounder and COO of Job Today, told VentureBeat that the U.S. was on the company’s radar for launch in 2016, but this has yet to materialize. For now, Job Today is limited to Spain and the U.K., where the service is currently being rolled out to a number of cities across the country. With $20 million more in the bag, however, it said that it is now in a “strong position” to expand into the U.S. and across Europe.

As with many new services, Job Today is adopting a mobile-first approach. Available on Android and iOS, the app is aimed primarily at businesses operating in the retail, hospitality, and service industries, and it claims to have attracted two million candidates and 150,000 businesses, including McDonald’s, Starbucks, Pizza Hut, Subway, and Holiday Inn. The company claims that it processes “close to one million” job applications every week.

Rather than relying on CVs, job-seekers create a profile in a few minutes, then apply for advertised positions in a single tap. Additionally, there is a built-in messaging feature to facilitate real-time conversations between employers and applicants. It’s kind of like what you’d get if you merged Monster with Hotel Tonight and WhatsApp — a recruitment platform that’s all about the here-and-now, built on a backbone of one-to-one communication.

“We understand what it takes to get a job, because we have been there ourselves,” said Eugene Mizin, Job Today’s cofounder and CEO. “We believe that as someone looking for a job, you’re better off speaking with a prospective employer directly, and that’s exactly what Job Today enables you to do in a matter of minutes.”

Recruitment platforms have garnered significant investment throughout 2016. Just yesterday, Hired added $30 million to its coffers, closing off its Series C round at $70 million. Last month, Jobbio raised $5.6 million to connect employers with job seekers, while Vettery raised $9 million to replace headhunters. Elsewhere, The Muse closed a $16 million round to grow its recruitment service for millennials, Spain-based Jobandtalent grabbed $42 million, and Handshake raised $10.5 million to help college students search for jobs and internships.

“Job Today is solving a vital problem for millions of people, matching job-seekers with employers in 24 hours,” said Andrew Gershfeld, partner at Flint Capital. “We’re thrilled to partner with Job Today and to support the company’s ambitious vision.”