Kasisto, a spinoff of Siri-maker SRI International, added two bots to the personal finance bot space today with the introduction of MyKAI and KAI Banking.

The two bots are available for Facebook Messenger, Slack, and via SMS — MyKAI for consumer finance and KAI Banking to help banks interact with their customers on these platforms. Kasisto’s two bots join Abe, Penny, and Finn in the personal finance bot market and represent a bet that people are interested in banking inside a messaging app rather than in a standalone online banking app.

Kasisto’s new bots can answer a lot of people’s questions about their personal finances, along with other things like, “Will robots take my job?”

Answer: “Hm, yes. The prospect of automation raises questions about labor. Though a bot, I can’t answer them.”

Users of the MyKAI bot can make payments and manage money across multiple accounts through Venmo or more than 20,000 banks. They can also ask and get answers to questions about their personal finances, like “How much did I spend on groceries last week?” or “How much did I deposit in April?” 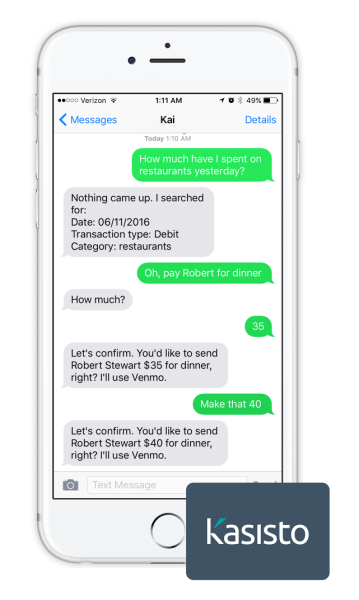 MyKAI can answer more than 1,000 questions about banking terms, such as: “What is the Fair Credit Billing Act?”, as well as more personal questions like “How much did I pay my friend Andy last Friday” and “What’s your favorite color?”

Kasisto was founded in 2013 by Dror Oren, Sasha Caskey, and Zor Gorelov, and has offices in Menlo Park, Calif. and New York. Investors include New York Angels and Wells Fargo Startup Accelerator.