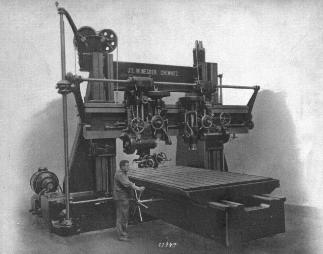 Social network analytics company Kontagent is a bit like a machine-tool inventor of the 1800s. Machine tools helped spur massive industrialization: Manufacturers could buy these tools instead of creating their own in order to build production machines for things like consumer goods. In the young world of social network applications, Kontagent may help spur a wave of higher-quality Facebook applications. It provides detailed information about user behavior on social network applications in a web interface — at a level of complexity that smaller developers can’t easily build themselves, if for no other reason than lack of time.

There have been a variety of competing analytics companies serving Facebook application developers since the company’s platform launched more than a year ago. San Francisco-based Kontagent has been building its service for nearly a year, and claims it can get far more analytical than competitors — and put small developers on par with the largest ones. 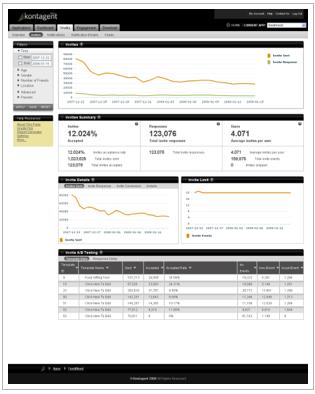 It lets you measure basic information about applications, including pageviews and time on site, and it also lets you record and view users’ ages, locations, gender and number of friends. Then it goes a step further by letting you do things like “User demographic to social behavior correlation analysis.” You filter based on type of user, then you match that filter with the behavior you’re interested in. This pairing of users and behaviors lets developers answer questions like “how many 20-something males from California with 250-plus friends are using my Bob Marley-themed music sharing application” or “how many high school students spent time on the page where you let them buy virtual goods for my fantasy video game application.”

There’s more. The company also provides ways to measure virality, which can let you find out answers to even more specific questions — “the average high school student who spent 10 minutes a month looking at virtual goods invited three friends to play the game with them,” for example.

Kontagent’s software lets developers test different versions of a single application against each other (a method called A/B testing) to see which features on which version cause things like an increase or decrease in pageviews, time on site, amount of attention paid to ads or anything else. See screenshot, that the company doesn’t offer a higher-resolution version of for competitive reasons.

Note: While I was working on this story, I asked one top developer what sort of analytics software he used, and he replied by pointing to his heart and his head. “You can’t take Fun App Version A versus Fun App Version B if neither are fun in the first place,” he told me (although he admitted he needed to start using more analytics tools). In other words, app developers, like manufacturers, still have to use their own creativity to use tools like Kontangent to build things that people actually want. 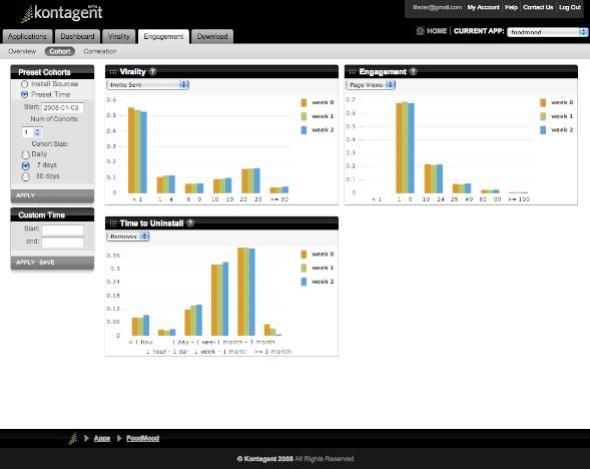 But wait, what about competitors?

Analytics tools themselves are hardly new to Facebook developers. Adonomics and Social Media‘s Appsaholic have been around for about a year. The former has been integrated with developer company The UADA, and is a public source of data about application performance. The latter has become integrated with Social Media’s advertising service, and provides advertising-focused analysis. Sometrics is another competitor, although it also focuses on ads. Kissmetrics and Developer Analytics may be the closest competitors in terms of their focus on application growth versus advertising. Kissmetrics is still in private beta, and I haven’t had a look yet. Developer Analytics also offers cross-reference information, like seeing how likely it is that an average user prefers certain other types of apps. Kontagent sees competitors like Adonomics as more similar to web measurement firms comScore or Hitwise, with itself as a more focused analytics provider, such as CoreMetrics or Omniture. One small difficulty of using Kontagent is that it requires software installation on both an application’s servers and on its front-end web interface.

All of these companies are competing to provide more advanced analytics as the overall markets grow. Kontagent, while new on the scene, appears to be getting some traction. The team is comprised of engineering Ph.Ds, including serial entrepreneurs Albert Lai and Jeffery Tseng, who are on their fifth and second startup, respectively. The company is in regular contact with Facebook and is talking with other social networks (interestingly, it also says it has relationships with a number of large media companies). Facebook is trying to make it possible for small developers to better compete against the large companies, and Kontagent’s detailed features help level the proverbial playing field — although Kontagent also has relationships with top application developers, it says.

Here’s the company’s in-house comparison of features vs competitors: 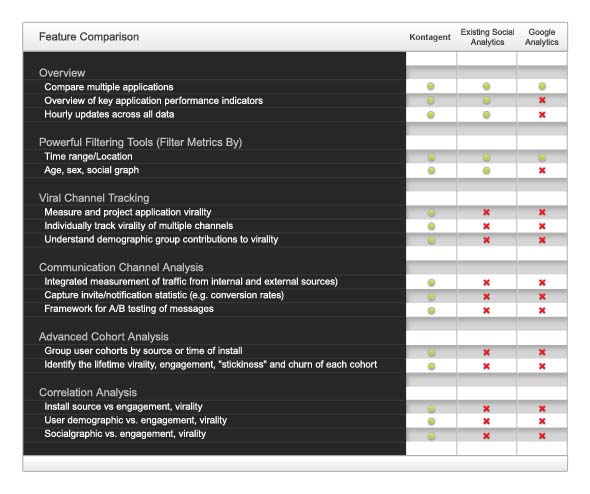 The company also has some interesting things in the works. It is developing integration with MySpace and other social networks that use the Open Social application development standards and plans to launch this service shortly. It will also integrate with Facebook Connect, Facebook’s service that lets you sign on to other sites and communicate with friends using your Facebook identity.

Kontagent is venture-backed, although it hasn’t named any investors. It’s in private beta, everything is free, and it plans to introduce premium features in the future.