Kopin is unveiling a series of technologies today that it says will make augmented reality glasses — heretofore clunky and awkward to wear — as wearable as a pair of sunglasses.

The Westborough, Massachusetts-based company — previously focused on the combat wearable market — said it has made advances with the world’s smallest smart glass display, a breakthrough battery technology, and a new speech-recognition chip that together will make smart eyewear into something that may be fashionable enough for consumers to actually wear. That’s important for wearables and augmented reality to penetrate markets such as sports, health care, manufacturing, warehousing, gaming, and even drone racing.

The technology includes what Kopin calls the world’s smallest smart glass display. The Pupil display module is only 2 millimeters in height, and it is part of the company’s Vista technologies, which include an ultra-compact Cyberdisplay LCD and miniature optics that can project a high-resolution, high-brightness image. Using Kopin Vista technology, smart eyewear can look like a normal pair of glasses, the company said.

Kopin is showing off the technology at the 2016 International CES, the big tech trade show in Las Vegas this week. The trio of patented technologies shows the breadth of Kopin, which has been making wearables for the military and other markets for three decades.

“Kopin believes head-worn devices will be the ultimate wearable device because most human senses are around our heads,” said John Fan, CEO of Kopin, in a statement. “To be widely accepted by users, these devices should be stylish, lightweight, comfortable, and, most importantly, have a familiar look. Our super compact Vista products allow the design of the smart eyewear that meets these requirements.”

Kopin has created its own brand of smart sunglasses for cyclists, Solos, to show off the display technology. The current Solos use the 4mm version of the display module, and models with the 2mm display will come later. The display module provides a cyclist with a heads-up display for access to performance data. But Kopin will also make the technology available for other companies to purchase and design their own products based on it. 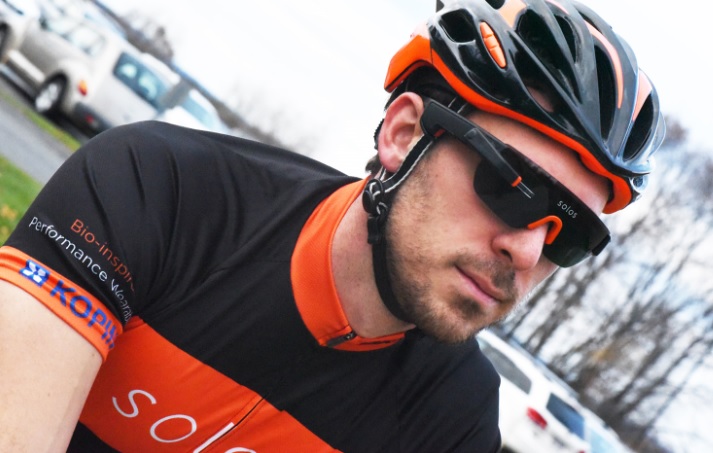 Above: Kopin has made its own smart-tech sunglasses for cyclists.

Kopin also created a very stylish concept eyeglass with a 4mm version of the Pupil display module embedded behind the eyeglass frame and totally invisible from the outside.

“Our Vista display modules have been optimally designed with an integrated optic, display, and backlight in a compact product-ready package, which provides an augmented reality experience with a vivid and bright sunlight-readable image while using minimal power,” said Yoichi Iba, Kopin’s chief optics scientist and inventor of the Pupil optics, in a statement. “Look in the mirror at your eye and now imagine a display the size of your pupil which provides see-through/see-around viewing without the higher power consumption of other see-through technologies. That is what we achieved when we introduced the 4mm display module last year. With today’s debut of 2mm technology, Kopin has set yet another standard for world’s smallest display module.” 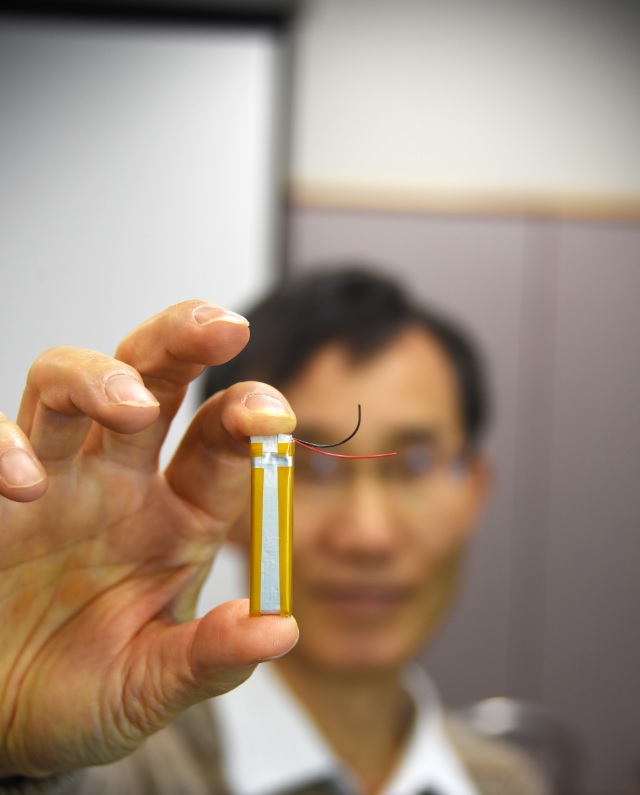 Kopin also announced it has teamed up with Hitachi Maxwell to build a smaller, lighter, and longer-lasting lithium-ion (Li-ion) battery for wearable devices. The new battery uses high-content silicon oxide-carbon technology to double the capacity of a battery for a comparable volume.

Kopin will exclusively market the batteries to manufacturing customers under the brand name SiMax for use in head-worn wearables. The battery measures 46 x 10.5 x 5.5 millimeters, and it has a 400-milliampere (mAh) capacity. Production begins in the second quarter of 2016, and the batteries will be used in Kopin’s Solos cycling eyewear product.

Conventional Li-ion battery capacity has been increasing only gradually in recent years. The company says that the result has been a widening mismatch between what people would like to do with mobile and wearable devices and what they can do. Now, the higher-capacity, smaller, and lighter SiMax batteries will close this gap and enable the performance and product designs that consumers require for wearable products and head-worn systems, Kopin said.

“We are pleased to be partnering with Kopin to commercialize the battery technology, which provides unprecedented capacity in small form factors,” said Masao Okafuji, chief technology officer of Hitachi Maxell, in a statement. “While it has been well known that the use of high-SiO-C-content anode can provide several times the energy density than the graphite anode used in today’s Li-ion cells, until now serious technical challenges prevented its use. We have now overcome these technical challenges and are ready to commercialize the first batteries using this new technology.”

The company is showing the technology at a suite at the Palazzo hotel during CES. 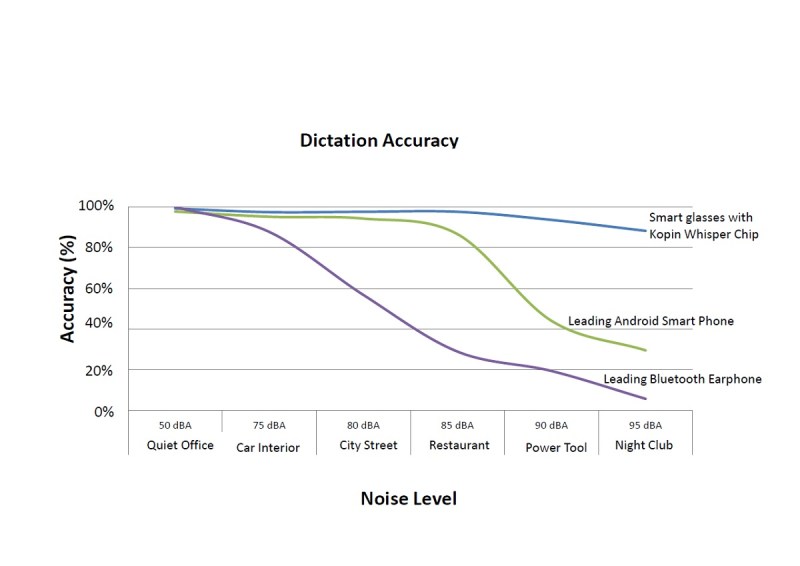 Above: Kopin’s chart shows the sound quality for its new audio chip.

Lastly, Kopin has created its Whisper Voice chip, which is designed to work with wearables and allow your voice to be heard in even the harshest of environments. The chip lets a speaker’s voice be heard by the listener even at just a whisper.

The all-digital chip includes Kopin’s Voice Extraction technology that enables a hands-free voice interface. The patented tech isolates a voice signal without distorting it, which the company says will mean you don’t have to raise your voice even in a noisy environment.

“The Whisper Chip is a dramatic leap forward in voice control technology,” said Fan, in a statement. “Users of smart phones and wearables will now, for the first time ever, enjoy reliable voice operation of all functions, including command and control, search and dictation — even when they speak in a whisper. Unreliable and inaccurate response to voice commands or voice-to-text, especially in noisy environments, is holding back user satisfaction, and therefore use, of voice interface for both wearables and smart phones. Reliable speech recognition is what users have been waiting for. With the launch of Kopin’s Whisper technology, the long wait is finally over.”

Verizon and Kopin have been working on the technology for nearly four years. The chip runs at 16 megahertz and consumes less than 12 milliwatts of power. The chip is compact, at a four-millimeter squared size.

“Our customers tell us, it’s the only solution that is truly hands-free,” said Ted Stecko, new product development manager for Verizon Wireless, in a statement. “The most notable capability Kopin has demonstrated to Verizon customers is a true hands-free, noise cancelled speech recognition interface that works for everyone, literally everywhere, regardless of the noisy environment.”

The chip is available for evaluation purposes now.