John Maeda thinks that companies should reconfigure their understanding of design into three parts to give them a better grasp of what’s needed to craft a great customer experience — and be more competitive. The design partner for Kleiner Perkins Caufield & Byers sees the growing number of acquisitions of design firms as evidence of this trend. He believes that the profession is more than just “about beauty,” but rather about establishing market relevance and generating real results.

In Maeda’s second annual “Design in Tech” report, he moved from raising awareness about design in tech to focusing on larger, established firms that have either become complacent with their creative efforts or are looking for insights into what disruptors (read: startups) are doing better. He cites research from Gartner, the Temkin Group, Accenture, and others as evidence that executives and companies are looking for better ways to differentiate their products from competitors. “Experiences are more important than products now. In fact, experiences are products,” analyst Brian Solis once said.

This behavior is already seen in Capital One’s acquisition of Adaptive Path and Monsoon, BBVA’s purchase of Spring Studio, Ernst & Young (EY)’s pickup of the digital consultancy Seren, Salesforce’s grab of application development firm Akta, and others. In fact, Maeda’s study shows 42 design firms have been acquired since 2004, with approximately 50 percent of the deals made within the last year. The most active buyers: Accenture, Deloitte, IBM, and Facebook. 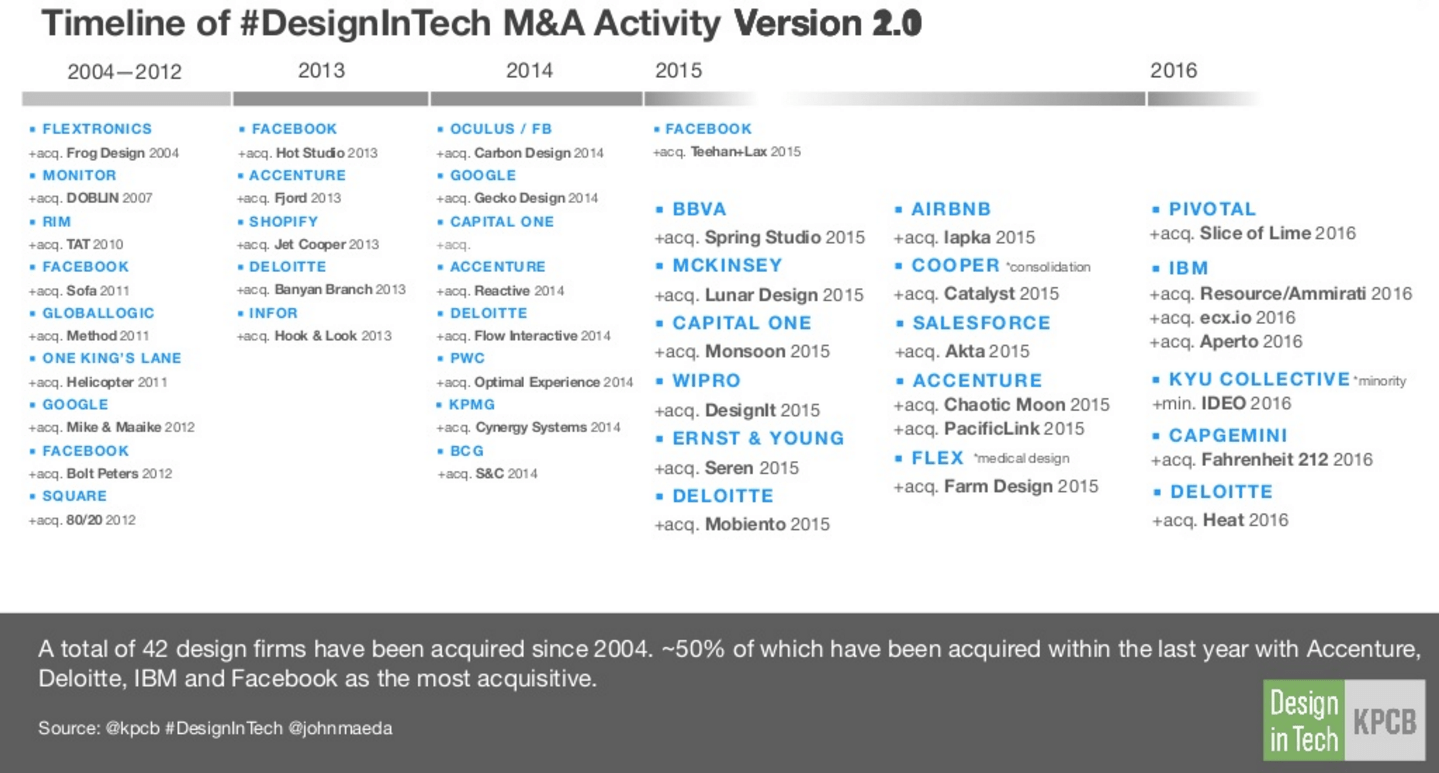 Above: A chart tracking the M&A activities around design firms and consultancies.

“There’s a whole change in how design is being used in the industry,” Maeda told VentureBeat. “Consulting firms are interested in showing their CEOs and clients the importance of design.”

Having a designer with a traditional education is good, but working in technology requires a different mindset, Maeda stated. His research that companies need to evolve their thinking into three competencies: classical design, design thinking, and computational design. 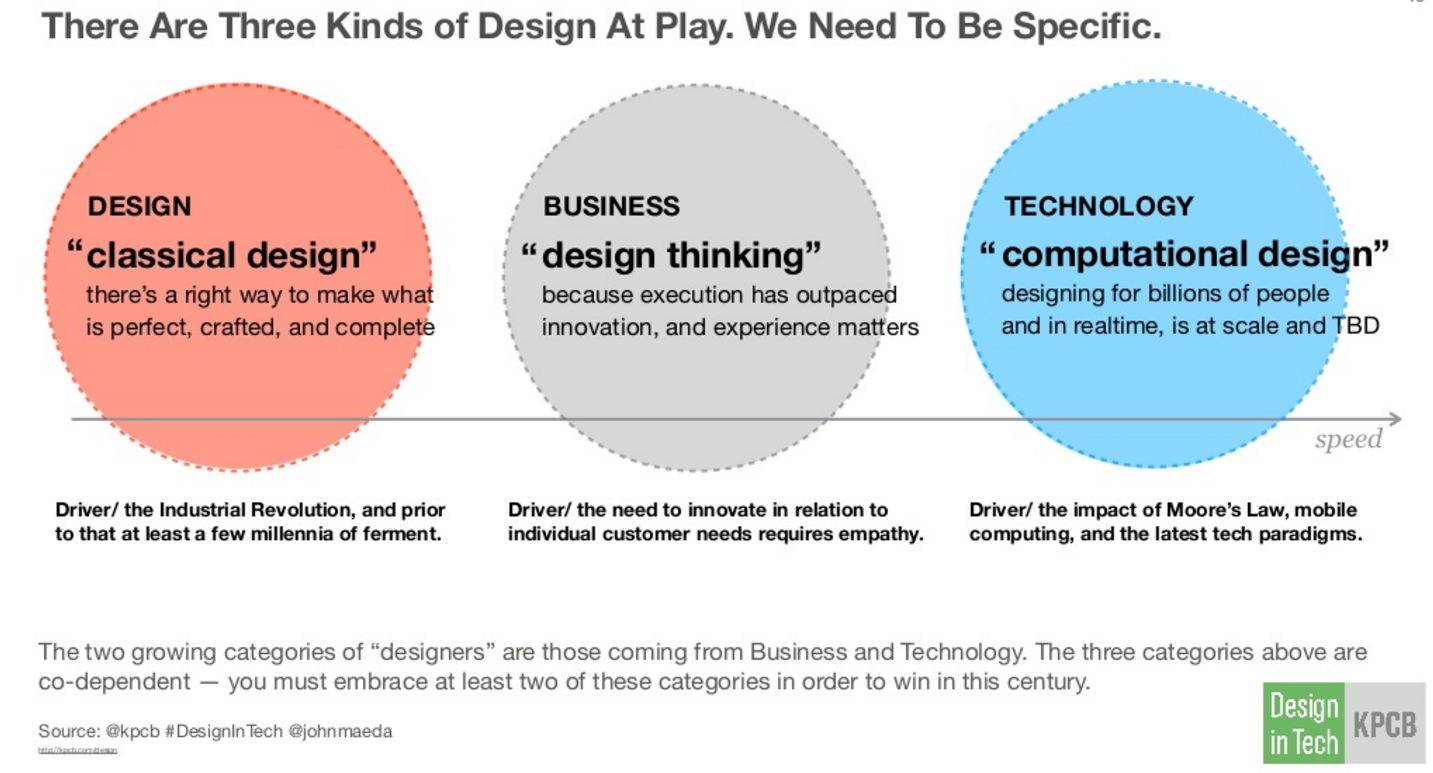 Above: The three design competencies that KPCB’s John Maeda believes companies should have to remain innovative.

Classical design is the education that designers currently receive in school, which is used in media like print and physical displays. “It’s art,” he explained, saying that it will be around for centuries and will affect designers’ ability to be creative.

Design thinking is geared towards those who are business-focused. Those with this capability understand that when execution has outpaced innovation, it’s time to explore how design can further shape the customer experience. Maeda also looked at universities and discovered that some business students sought out design courses, which he believes is good in order to create empathy. 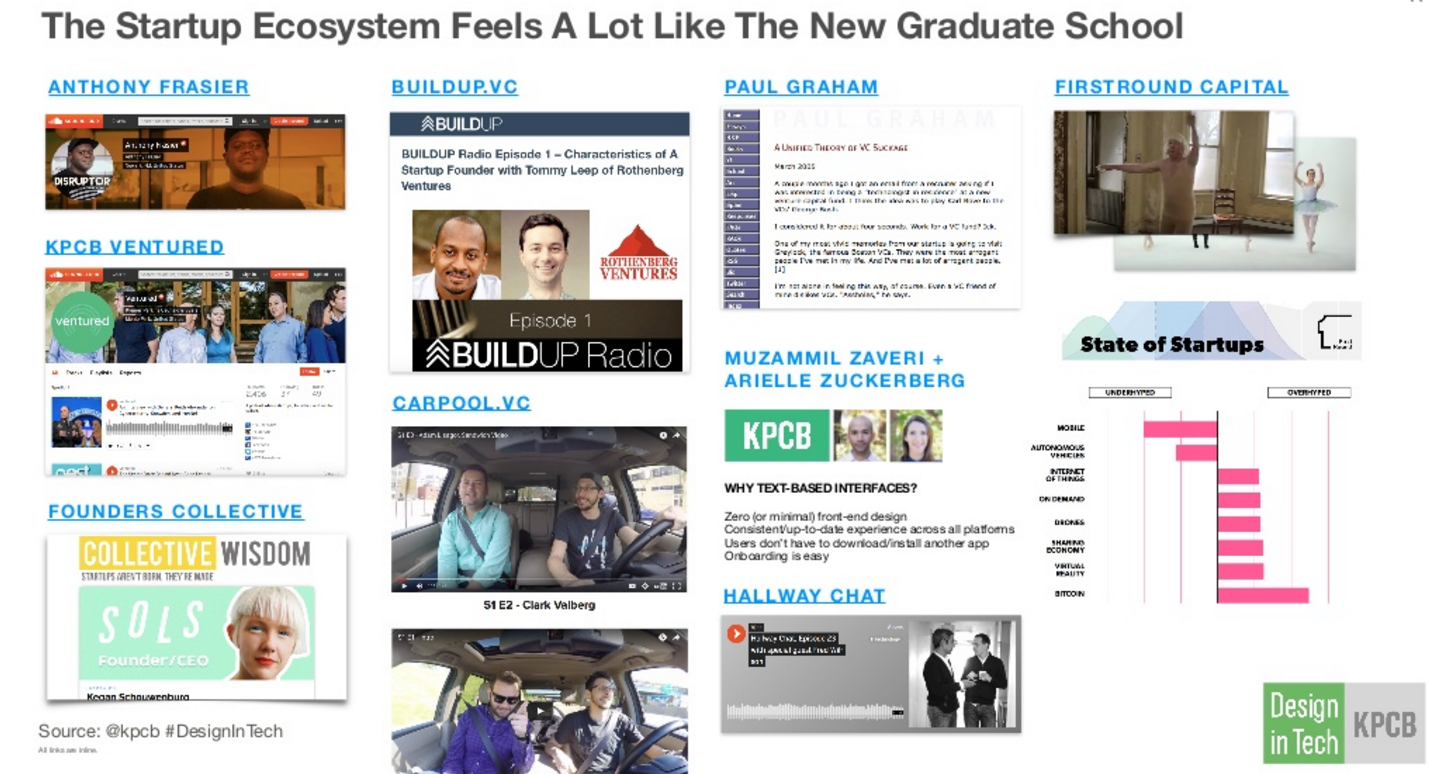 Lastly, computational thinkers are designers who have an understanding of algorithms and processes, especially those who can think about the customer experience in mobile apps, Internet-connected devices, autonomous vehicles, virtual reality, and other spaces.

Maeda used a car analogy to explain these competencies: If your car had a “crappy” interior, that would be a classical design problem. But if you’re buying a car from a company that doesn’t know how to make a car, then it would be design thinking that would be needed to save the day. Now, if there were a way to get the speedometer to change in specific situations or if there were a self-driving mode like in a Tesla, that would require computational design efforts. 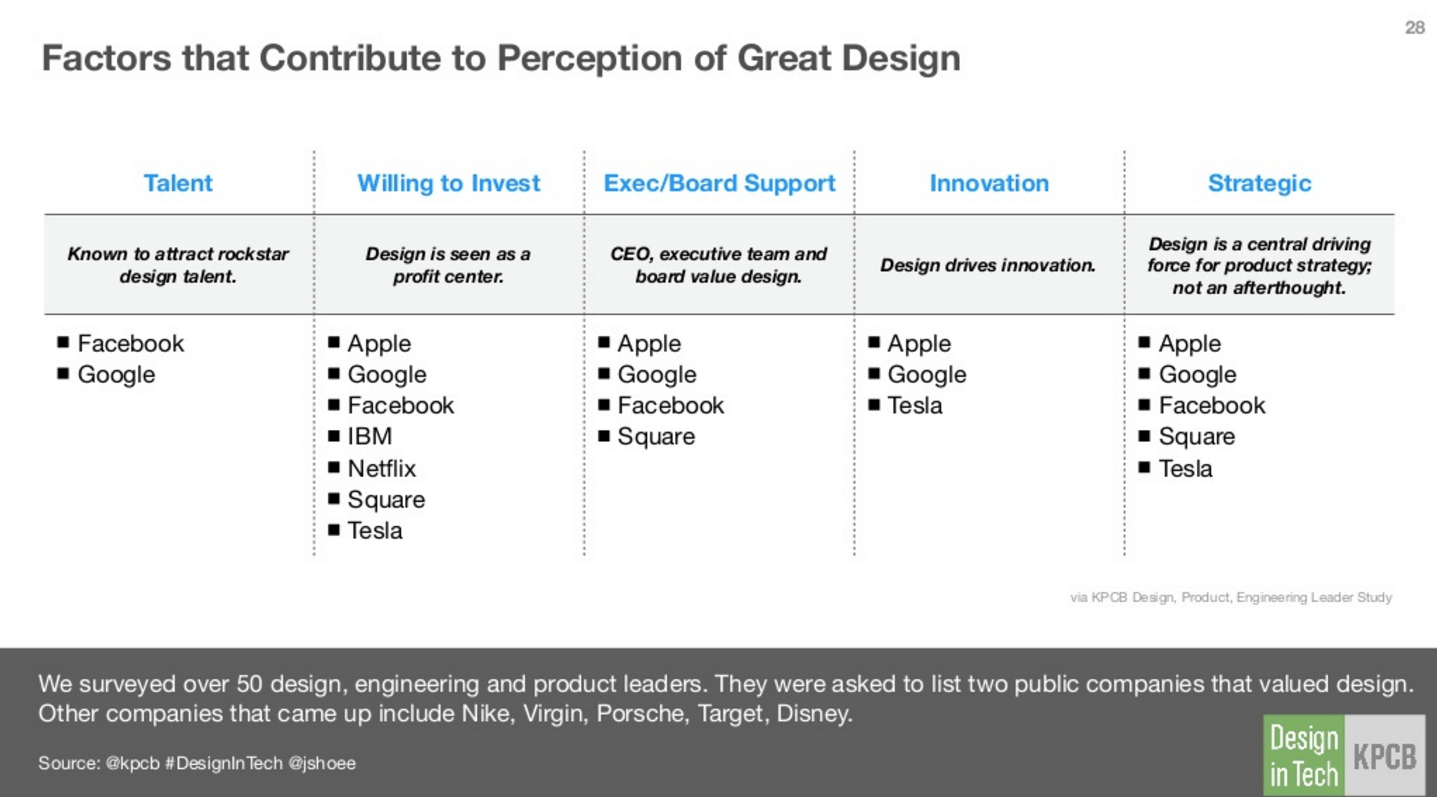 Companies that have designers with all of these capabilities will be able to move faster than their competitors, Maeda stated. It’s possible to have someone with all of these skills, but it’s likely that designers will only be able to excel in one or two. These are competencies that he’s examined while at the Rhode Island School of Design (RISD) and also at the Massachusetts Institute of Technology (MIT).

The “Design in Tech” report isn’t intended to apply to startups or tech companies, as many already have workers with these skills. Maeda admitted that when he first started at KPCB, he was “humbled” at how quickly the startup world worked and noted that many CEOs at these companies already had the aforementioned competencies. Not just startups, but many larger tech companies like Google have thought about how to better incorporate design into their organizations.

His report also includes predictions for the next five years, one of which is that designers who stay after their firms are acquired will gain valuable boardroom experience and could join the executive suite. Maeda also sees the formation of more designer-led institutional funds, helping to foster culture and diversity in companies — as he noted, many designers are already active angel investors. Finally, he thinks that the word “design” itself will become meaningless as people begin to qualify the specific kind of design they’re looking for.

You can view the entire report below: