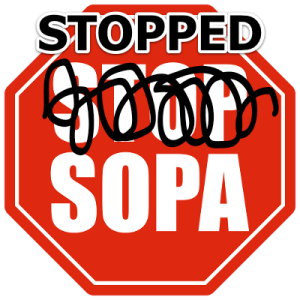 Following the news that the Senate is delaying a vote the Protect Intellectual Property Act (PIPA), House Judiciary Committee Chairman Lamar Smith (R-Texas) issued a statement today admitting that Congress may need to rethink its approach to thwarting piracy.

Smith is the author of the House version of PIPA, the Stop Online Piracy Act. Last week, he announced that a vote on SOPA would be delayed until February, but the delay could actually end up being much longer — like forever.

Smith’s new statement implicitly acknowledges the mounting tide of anti-SOPA sentiment that culminated Wednesday with many websites going offline or “blacking out” their homepages, anti-SOPA protests in several cities, and millions of people signing petitions against the proposed legislation.

PIPA and SOPA give the U.S. government and copyright holders the authority to seek court orders against foreign websites associated with infringing, pirating and/or counterfeiting intellectual property. It could drastically change the way the Internet operates if either bill is voted into law. For instance, if a website is accused of containing copyright-infringing content (like a song, picture, video clip etc.), the site could be blocked by ISPs (like Comcast), de-indexed from search engines, and even prevented from doing business online with services like PayPal.

Based on Smith’s statements, it seems unlikely that SOPA will get sent to the House floor for a vote before the country holds elections for the 113th Congress — meaning that SOPA is essentially dead.

“The House Judiciary Committee will postpone consideration of the legislation until there is wider agreement on a solution,” Smith said.

Much of the initial push behind SOPA and PIPA came from large media companies (Hollywood) that claim they take millions of dollars in financial losses due to piracy from organizations outside of the U.S. However, the methods SOPA and PIPA want to use for thwarting piracy have raised lots of opposition from the technology industry as well as millions of U.S. citizens.

So, reaching a legislative solution for curbing piracy that both tech business leaders and Hollywood can agree on probably won’t happen anytime soon.

However, both sides do seem willing to start talking about the issue of stopping piracy. The pro-SOPA Motion Picture Association of America’s president and former senator Chris Dodd has recently even suggested that the two sides start meeting.

“The problem of online piracy is too big to ignore. American intellectual property industries provide 19 million high-paying jobs and account for more than 60 percent of U.S. exports. The theft of America’s intellectual property costs the U.S. economy more than $100 billion annually and results in the loss of thousands of American jobs.  Congress cannot stand by and do nothing while American innovators and job creators are under attack.

“The online theft of American intellectual property is no different than the theft of products from a store.  It is illegal and the law should be enforced both in the store and online.

“The Committee will continue work with copyright owners, Internet companies, financial institutions to develop proposals that combat online piracy and protect America’s intellectual property.  We welcome input from all organizations and individuals who have an honest difference of opinion about how best to address this widespread problem.  The Committee remains committed to finding a solution to the problem of online piracy that protects American intellectual property and innovation.”

The House Judiciary Committee will postpone consideration of the legislation until there is wider agreement on a solution.