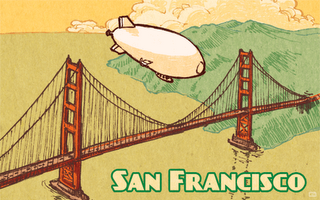 This fall, if our San Francisco Bay Area readers spot a zeppelin overhead, don’t worry — you haven’t been caught in a time warp. It will just mean that a startup called Airship Ventures has succeeded in bringing the zeppelin (an icon of 1930s aviation) back to the United States. The company just raised $8 million in a first round of funding.

Specifically, Airship Ventures plans to offer zeppelin rides out of Moffett Field. If the company follows through on its plans, it will bring the first zeppelin to Moffett Field since 1947. In a few months, Airship will operate a single Zeppelin NT based in Moffett’s Hangar 2, which was built by the Navy to house zeppelins in 1942.

The funding will allow Airship to actually complete the purchase of its first vehicle. Apparently, at 246 feet in length, the Zeppelin NT will be 50 feet longer than the largest blimp, and will hold up to 12 passengers. Similar airships are already operating safely in Japan and Germany, the company says.

Airship will offer its rides for “flightseeing” tours (yes, that’s what they call them), as well as media and science operations. Apparently, flights will be available for between $250 and $500, around the same price as a ride in a hot balloon.

The funding comes from six individuals, including noted tech commentator Esther Dyson. On her blog, Dyson praised the company a year ago as “an absolutely fantastic idea, both in the positive sense and as in ‘pure fantasy’.”

Airship is led by the wife-and-husband team of Alexandra and Brian Hall. Alexandra Hall was previously the head of the Chabot Space and Science Center in Oakland, Calif.