Ride-sharing startup Lyft has closed a $60 million third funding round led by venture firm Andreessen Horowitz, the company announced on its blog.

The startup with the tagline, “your friend with a car,” has developed an iPhone and Android app that lets you order a ride from a stranger in a matter of minutes. It’s an alternative to taxi cabs and has taken off in San Francisco and Los Angeles. 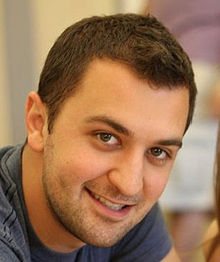 The special touch is that Lyft cars are emblazoned with pink moustaches, and drivers routinely fist bump passengers when they step into the car — typically at the front, not the back. “A core value for the company is empathy, and we built that into the experience,” said Lyft cofounder John Zimmer in an interview with VentureBeat.

Lyft launched in San Francisco in the summer of 2012 and is the most recent product from parent company Zimride. Zimride has been around since 2007 and has closed about $7.5 million in funding. Zimmer said that the two products have raised a combined $83 million.

Lyft has seen some impressive traction since it launched. The company announced today that it is now facilitating 30,000 rides each week. For this reason, it’s attracted significant attention from investors; Lyft today confirmed that the $15 million fundraise led by Founders Fund reported by TechCrunch in January 2013 (closed in October 2012) is accurate.

If Lyft hasn’t reached you yet, expect to see moustache-adorned cars in your city by the end of 2014.

Zimmer said that Lyft intends to spread across the country — and eventually across the world — by the end of next year. With the new boost in capital, it will focus on building out the team.

“We have an ambitious goals and we know that,” he said. In the previous 12 months, Lyft has raised $75 million from Founders Fund, Andreessen Horowitz, Mayfield, FloodGate, and others — it must grow at an accelerated rate so its later-stage investors will see a return. It has raised a total of $85 million.

Lyft faces a number of potential challenges as it scales. “They [our investors] all know there are regulatory hurdles — but it’s clear we’re going beyond what’s expected in terms of safety,” said Zimmer.

Drivers are vetted and subject to extensive background checks. But city regulators and consumers are still nervous — California authorities levied hefty citations against Lyft in November 2012. These were later dropped so the California Public Utilities Commission (CPUC) could reexamine its policies.

Among the original charges: a lack of evidence of property damage insurance coverage and evidence of workers compensation insurance, and failure to enroll drivers in the Department of Motor Vehicles Employer Pull Notice Program.

To its credit, Lyft has built up a community of supporters, who launched petitions on sites like Change.org to fight in its corner. “Our evangelists came out with thousands of phone calls and emails to the CPUC,” said Zimmer. “I think we’ll rally the troops again if need be.”

A decision from California regulators in favor of Lyft and other regulators could set a precedent. And therefore, Andreessen Horowitz must not have viewed this an obstacle to Lyft’s expansion plans, which are necessary for the firm to get a return on its investment.

In addition, the company operates on a community ride-sharing model, which sets it apart from chief competitor Uber. Passengers are asked for a suggested donation — it’s not entirely clear as it moves across the country (outside of cash flush cities like San Francisco) whether this will be paid. Zimmer recently admitted that he might have to reevaluate the business model. 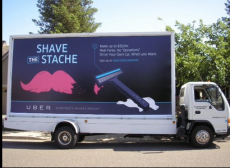 Above: Spotted: An aggressive ad campaign from Uber against its rival, Lyft

Perhaps the biggest threat of all comes from Uber, which recently rolled out its own ride-sharing service. Uber had relied on third-party limo and taxi services to provide drivers. But it has been watching its competitors steal market share — and has seen regulators give tacit approval to ride-sharing — and isn’t willing to give up valuable revenue.

When pressed about the competitive market, Zimmer quipped: “We led the peer-to-peer ride space — and there is a big difference between the community experience and what our competitors are doing.”

Finally, the company must stay committed to recruiting drivers who are willing to work on holidays and rush hour. To ensure it could keep its drivers happy so they wouldn’t be lured away by rivals, Lyft didn’t take a cut of the transaction for the first six months. Now, it is taking 20 percent from each ride.

To surmount these challenges, Lyft’s founding team is in full battle mode. “Better transportation that’s more affordable and more social is worth fighting for,” said Zimmer.

Celebrating One Year Together

What does the pink mustache stand for? It’s a question we get asked frequently. People are curious when they see it for the first time, but once you’re a part of the community, a bigger meaning comes through. The pink mustache is a smile. It’s the goal of finishing your ride a little happier than you were before. It’s the belief that people are inherently good. It’s the idea that a great conversation on a trip across town can result in a new friend, a job offer, or even a hug after a tough breakup. Longtime Lyft driver, Danielle, put it best when she said “Lyfting restored my faith in humanity.”

Since you’ve helped define this larger meaning, we wanted the Lyft community to be the first to hear about some good news. Today, just one year after we first launched in San Francisco, we’re excited to announce that we’ve received additional investment from the amazing team at Andreessen Horowitz to bring Lyft to cities all over the world. This funding, along with an investment from Founders Fund earlier this year, will support our global expansion, giving us resources to strengthen existing Lyft communities and build new ones. From the beginning, the Lyft community has set itself apart inspiring us with passion, and we’re thrilled to be on this journey together.

To celebrate the past year, we took a trip down memory lane with some of our favorite community moments. We’ve learned that getting a kind note from a stranger can make someone’s day, that spontaneous in-car karaoke sessions are sometimes the best part of a night out, and that simple acts of kindness can bring us closer together.