Mattermost, a startup developing what it characterizes as an open source messaging alternative to Google’s Hangouts Chat, Atlassian’s HipChat, Slack, and Microsoft Teams, today announced the closure of a $50 million series B funding round. The round was led by Y Combinator’s Continuity Fund, with participation from new investor Battery Ventures, as well as existing investors Redpoint and S28 Capital. The capital infusion follows a $20 million series A in February and a $3.5 million seed round in February 2017 and brings the Palo Alto, California-based company’s total raised to roughly $70 million.

As part of the round, Twitter COO Ali Rowghani will join Mattermost as board director and Battery Ventures’ Neeraj Agarwal will join as a board observer. The raise comes as monthly downloads of the open source project pass 10,000. To date, more than 1,000 contributors have helped translate Mattermost into 16 languages.

CEO Ian Tien says the series B proceeds will accelerate Mattermost’s community expansion and product development and fuel expansion of its workforce from 65 employees to 110 by 2020. “Mattermost, as well as others in this space … find messaging increasingly as common as email and web conferencing inside the enterprise,” he added. “To realize the category’s full potential, we think the messaging collaboration space needs an open source option. That’s why we started Mattermost … and with today’s announcement, we think this option is fully established.”

Tien cofounded Mattermost in 2014, after he and colleagues at game development studio SpinPunch encountered challenges with a commercial messaging app they’d been using — chiefly crashes and an inability to export gigabytes of chat logs. Their solution? Repurposing their game development engine’s chat features and turning it into Mattermost. 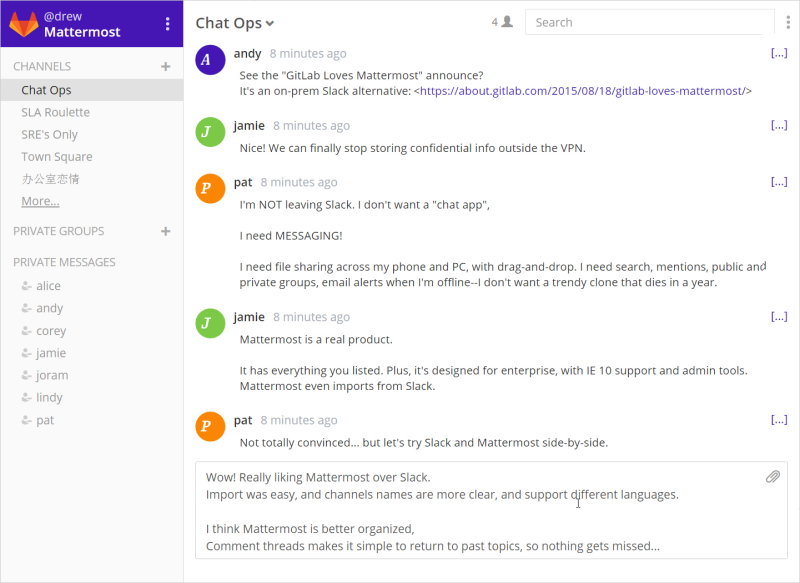 The company hosts clients for Mac, iOS, Android, Windows, and Linux, along with prebuilt images for Amazon Web Services, Microsoft’s Azure, and Google Cloud Platform, all of which are designed to integrate with over 600 third-party apps and services, including GitHub and Trello. Mattermost can be deployed to a private cloud or on-premises and configured to work with mobile security systems (e.g., SSL, VPN, and DMZ), with high availability and speedy search, thanks to a clustered infrastructure and efficient databases. Moreover, it boasts tools like a performance monitoring dashboard, incoming and outgoing webhooks, custom slash commands, chatbots, and an API library, in addition to support for OAuth 2.0 apps.

On the frontend, Mattermost packs features you’d expect from a modern messaging offering, like organized conversations in teams and channels, fully searchable message history, one-on-one group messaging, and emoji and markdown formatting. Voice, video, and screen-sharing tools are in tow, as are custom desktop, email, and mobile notifications, mentions alerts, and a Do Not Disturb mode. With respect to compliance and security, admins can impose data retention and e-discovery policies for compliance or enable AD/LDAP authentication and sync and enforce multi-factor authentication and SAML 2.0 single sign-on.

In the five years since its founding, Mattermost has managed to attract some heavy-hitting customers, including Uber, which deployed uChat — a custom chat app built on top of Mattermost — internally in 2017. It’s able to process tens of thousands of users and over 1 million messages daily, Uber says, enabling the ridesharing company’s hundreds of teams to migrate nearly 20,000 existing chat rooms from HipChat and Slack.

“Mattermost is an important contributor to Uber’s internal productivity. It is our internal standard for chat, empowering collaboration for our employees and internal contractors,” said Uber senior engineering manager Ben Booth. “Its integration with our engineering and operational workflows helps ensure that our most well-known products are highly reliable.”

Despite rivals like Threads and others, Rowghani believes there’s enormous potential for growth in segments such as financial services, manufacturing, health care, public sector and defense, and online services. He pegs the total addressable market for messaging collaboration at $30 billion, which jibes with Slack’s recent estimate of $28 billion.

“This is YC’s largest investment in an open source company to date,” said Rowghani. “We believe that open source will drive innovation in enterprise messaging and collaboration just as it has for the infrastructure stack that powers the world’s largest companies.”