Meebo Rooms, the chat room service offered by IM company Meebo, is experiencing eye-popping growth. After just seven months, its attracting well over twice the monthly unique users that Meebo’s own web site gets. And Meebo’s own site is no slouch.

People apparently want to IM with each other on sites across the web. You’ve long heard that destination sites are no longer “in,” and Meebo’s experience is a confirmation of that.

Rooms, which you can can embed on another site, was launched last May. Together with Meebo ME, the Mountain View, Calif.’ company’s IM widget for only one-to-one (not group) chat, the two services brought in 19.7 million unique monthly visitors in October, according to Comscore. The vast majority of that traffic comes from Rooms.

Meanwhile, the company’s core home page service, which lets you create a Meebo IM identity that syncs with AIM, Yahoo and other IM services, has grown to near seven million unique monthly visitors, according to the company. Meebo’s most active users are still on this home page service. Note: Meebo’s internal count of its widgets is actually lower than Comscore’s. The graph below, from the company’s internal data, shows only 24 million total unique visitors, including Meebo, Rooms, and Meebo ME. 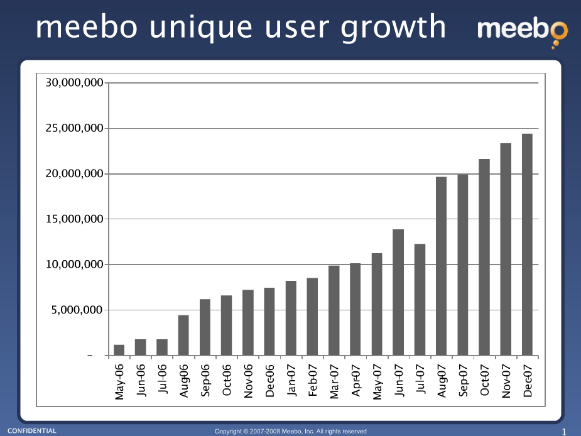 Meebo also introduced a developer platform so other companies can offer games and other applications within Meebo’s services. That only launched at the end of October (our coverage), and is a work in progress, Meebo tells us. So far, there are more than 400 registered third-party applications using the platform.

Rooms are showing up in more places. RockYou, the widget-maker on Myspace and application-maker on Facebook, uses Meebo rooms in its Horoscopes and Vampires applications on Facebook. That service was introduced last month. Rooms is also offered on these applications on Bebo, via Bebo’s developer platform.

Meebo, however, is still figuring out how to make money. It already has paying partnerships with a few advertisers, including record labels, CBS and Puma. Some early good news on that front: people are ten to 20 times more likely to click on a Meebo ad than a standard banner ad, because, the company says, the Meebo ad is integrated closely into the IM services. This year, the company plans to focus on building out its sales staff and bringing in more advertising deals.

The company has been focused on growth in more than one way. I first visited their offices this spring — the top floor of a small office building in downtown Mountain View — and it was mostly empty. When I stopped by the company’s offices today, its many new hires were packed in, without space to spare.