Check out VentureBeat’s roundup below of the 11 startups that presented at TechStars Austin’s 2014 demo day. 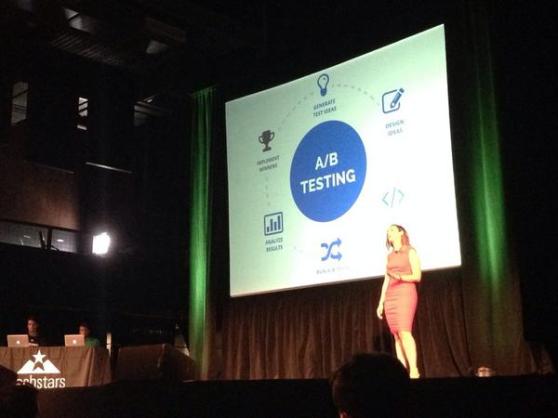 “Always be testing,” Experiment Engine founder Claire Vo told me with regard to her startup, which aims to provide an easy way for websites and mobile apps to carry out frequent A/B testing.

A/B testing entails making alternate versions of specific web pages (or mobile apps that feature alternate user interface designs) to track how a small portion of the site’s audience is responding to it. Versions that have a higher engagement rate can then be pushed out to all users. This is much more effective than just rolling out changes that are untested and hoping people like them. But despite the benefits, Vo said few companies bother with regular testing.

Experiment Engine hopes to change that by enticing companies to sign up for a paid monthly service that provides multiple A/B tests tailored for their online site. The tests themselves are created by usability experts, aka people who are good at looking at websites and figuring out the best ways to increase engagement. Those experts get paid a base fee, and if the test performs well they can make more. And creating tests via Experiment Engine’s platform also doesn’t require new code to be written.

Sorry H&R Block “tax professionals,” you’re about to be out of work. TechStars company Common Form has created a tax prep service that lets people file their tax return in about 5 minutes. The service is built for folks with basic finances (no property taxes, wages earned as a contractor, etc.) that only need to do a simple filing, which Common Form claims represents two-thirds of all filings.

To allow people to finish their taxes in minutes, Common Form allows you to snap a photo of your W-2 form to import all the information from it rather than making you manually enter it. It also attempts to automatically answer questions that other tax prep services force you to respond to after consulting definitions that the average person usually doesn’t fully understand.

“Instead of asking you how many children you have, and how many you want to claim as dependents, we just ask you if your Facebook profile information is up-to-date, then connect your account to answer those questions,” said cofounder Charles Logston.

The company generates revenue by charging a flat fee of $20 to file taxes, but only if the filing results in the IRS sending you a check. Those that owe money to the government use the service for free.

My biggest question to the founders, who all previously worked at now rival service TurboTax, is why I didn’t know about it back in April. 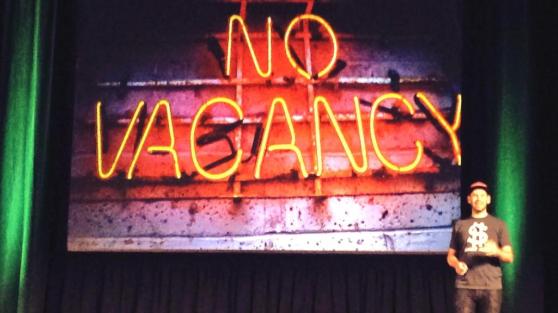 Smart Host is a “pricing engine” service that helps property owners make more money on vacation rentals from sites like Airbnb, HomeAway, FlipKey and others. The service is similar to how the airline and hotel industries fluctuate prices based on a variety of factors, which is why you often see multiple rates for the same hotel room or airfare across different services.

The problem is that property owners really have no idea how to price their rentals (often times using a random price that’s estimated after looking at similarly listed properties). And because of that, those properties go unbooked. By collecting data about rentals across multiple platforms, Smart Host allows those vacation property owners to determine a base price for rentals, and offers suggestions for new rates based on availability, similar properties, and a few other factors. The result means you know how much to charge on each vacation rental marketplace.

Cloud 66 is a cloud-based platform that allows companies to build a secure infrastructure on top of Amazon Web Services. It works by having a developer upload their code to Cloud 66’s platform, which then generates a suggestion for which infrastructure will work best. The startup already has over 700 clients, including Adobe, Shopify, and the BBC. Cloud 66’s also disclosed that its doubling revenue at a rate of every 6 months. 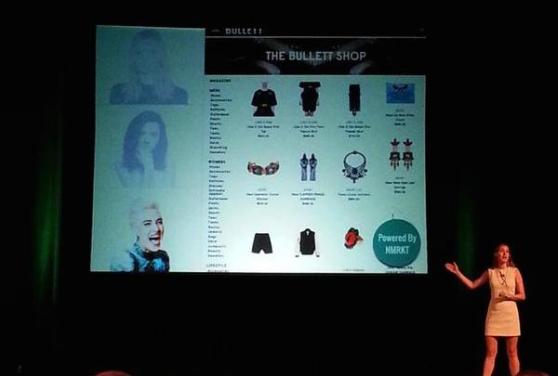 If you haven’t noticed, news organizations are having a mighty difficult time trying to maintain a sustainable business based on ad revenue alone. Therefore, any new option for additional revenue streams are now being considered.

Fortunately, Nmrkt has a pretty decent way for those digital publishers to make money. The startup offers news organizations and popular bloggers an option an affiliate link program of sorts, with Nmrkt forging partnerships with a slew of major retailers such as Sephora, Nordstrom, Shopbot, and about 250 others. Publishers can select from over a million different products to add to their custom store. When a reader clicks through to buy an item, it pushes them to the retailer’s official online web store. Both publishers and Nmrkt get a cut of the sales.

“We’re actually able to negotiate better rates than other affiliate link programs,” Nmrkt founder and CEO Julia Jacobson told me. “Retailers actually appreciate that we’re presenting their products in a way that’s much better than burying a link within an article page.”

Jacobson said the startup will build custom Nmrkt stores for site that bring in over 100 million unique visitors per month. Right now Nmrkt is focused on fashion and beauty products, but hopes to expand to other categories in the future like hunting, fishing, gadgets, and more. 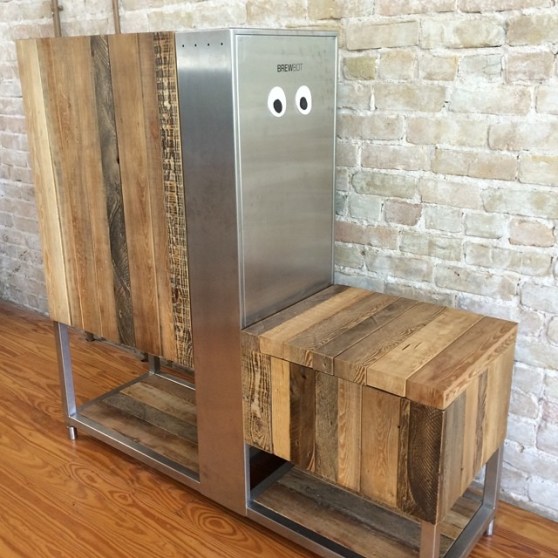 I bet you can’t even guess what this startup is about. (OK, that’s a lie.) Brewbot is a personal beer brewing machine that offers a high level of customization. Ingredients for each batch of beer are tracked and controlled via a Brewbot smartphone app, which displace what the startup calls “Beer DNA” profiles. You can even save recipes you like to recreate favorite batches of beer.

The startup is asking the question of why there are few machines that brew beer, and what its determined is that home brewing can be unpredictable based on your environment. The Brewbot machine takes care of that. Additionally, the startup is actually attempting to become a marketplace for beer ingredients, which is how it plans to generate revenue. (Check back on VentureBeat later for a more in-depth article about Brewbot.)

Unsurprisingly, lawn care businesses don’t spend a ton of time on integrating mobile tech into their operations, regardless of any benefits. The customers whose lawns they cut, however, probably do. TechStars company LawnStarter caters to this crowd by offering mobile marketplace for all available lawn care services. The app not only allows customers to see an overview of available businesses, but it also allows them to pay directly from the app and order other related landscaping services. Lawn care companies do need to sign up with LawnStarter to enable the functionality, which is an easy sell according to the startups founders because it ends up growing the overall business.

I absolutely get why this service is useful, and even how it fulfills a real need for its target business-level clients. But I feel like the majority of services employ workers that won’t always have access to a compatible smartphone, meaning only a handful of lawn services stand to benefit. Since LawnStarter takes a cut from all transactions made through the app, this might not be an issue though.

OK, so usually I single out at least one startup from demo day events that has a really great idea I honestly wasn’t expecting. This time it’s Fashion Metric, a self-described “virtual tailor” SaaS startup that provides consumers with a way to automatically find out if an article of clothing will fit their body without having to try it on.

Users start by entering commonly known body measurements (height, collar, arm lengths, etc.), pants size, weight, the size and brand of a favorite shirt, and a few other things. Using this information, Fashion Metric devises a method for determining other sizes that fit your body perfectly. “It seems simple, but in reality we’re using a pretty complex algorithm to determine if something will fit,” Fashion Metric CEO and founder Daina Linton told me after pitching the startup on stage.

For now, Fashion Metric is focusing on male clothing that can be tailored from fabric to your exact measurements. But Linton said the startup see opportunities to use its technology not just for custom clothing businesses, but also multi-brand retailers and possibly even as a perk for physical retailers that cater to customers who hate trying on clothes. (Personally, trying on clothes isn’t annoying for me. Its having the bad luck of trying on multiple things that don’t fit that gets annoying.)

Fashion Metric’s technology also offers online retailers an added benefit of minimizing returns, which makes sense since the majority of those returns would happen because something didn’t fit correctly. The startup has raised under $1 million in funding from Mark Cuban, BazaarVoice founder Brett Hurt, and the former chairman and CEO of Neiman Marcus.

Borrowing elements from Taskrabbit, Burpy is a same-day grocery delivery service that uses a personal shopper to buy all the stuff on your list from a handful of reasonably-priced stores. It currently only operates in Austin, San Antonio, and Houston, but has plans to expand beyond the state of Texas as growth permits. The startup tasks a personal shopper with getting all the items on your grocery list from each store, and promises to deliver said items within three hours. Orders over $50 get free shipping, but there’s a $7 fee for each additional store you send a shopper to.

The idea seems sound, and from what I could tell from the demo it seems like a pretty easy process for selecting all the items you want.

Burpy cofounder and CEO Aseem Ali told me after his pitch that the startup can track pricing on the items, which are marked up a certain amount depending on the item, it sells by translating the receipts from each purchase.

Of course, Burpy’s biggest obstacle will be in fighting back competition from rivals that already have a presence in many large cities — or in some cases even official partnerships with popular grocers. Instacart, for instance, is offered as a grocery delivery option for Austin, Texas-based Whole Foods. Other competitors include, Amazon Fresh, Google Shopping Express, and Walmart To Go.

Pivot Freight, a Phoenix, Arizona-based startup participating in the Austin TechStars program, offers a service that eliminates the middleman between businesses and freight shipping carriers. It’s platform allows companies to get shipping rates (which are often lower than brokers offer), book shipments, and track their progress. Pivot Freight said during its demo pitch that it’s currently working with 14 carriers. Since launching the startup has moved 871 shipments and generated $184,000 in revenue.

FreeTextbooks is probably the oldest startup that participated in the TechStars program, having launched in 2009. The company employs student representatives to promote its online textbook store, which it claims is far more effective (both in terms of reach and cost) than online ad campaigns. The student reps hold popup book stores on the college campus they attend, which allow students to sell back their books usually for more money than traditional book stores. Those books are then shipped off and made available on FreeTextbook’s online store, where students can get free 2-day shipping on all purchases. The Birmingham, Ala.-based startup is also profitable. It claims to have generated $2 million in revenue last year, while on track to do $6 million in sales from 60 different campuses by the end of 2014.