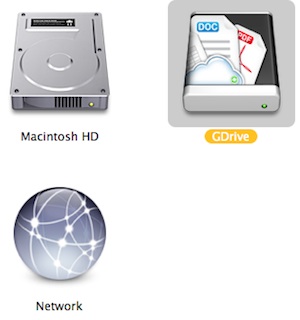 When Google announced the ability to upload and store files in Google Docs, that seemed to be as close as the search giant would get to releasing its long-rumored GDrive storage service. But the GDrive is finally here, kind of — it’s part of the new document syncing application offered by a company called Memeo.

It might sound misleading for Memeo to use a name that has such strong associations with Google, but it’s actually pretty accurate — the Aliso Viejo, Calif.-based company built the application, but Google Docs serves as storage on the backend. Memeo said it developed the application with help from Google, and in fact it launched the app at the same time Google announced the Docs storage feature in January.

With the first version of Connect, users get a way to easily upload documents of different formats into Docs, then access those documents on their desktop computer, including when they’re offline. If a document is edited, the content is updated across the user’s computers and in Docs.

Version 2.0 of Memeo Connect, which is available in a test version today, takes things a step further. Now Connect can really integrate with your computer’s file system, rather than just working as a standalone app. After you install and launch Connect, your files show up as the “GDrive” on your computer, and you can interact as if it were just an extension of your desktop. You can drag-and-drop files into the drive, and save files to the GDrive directly from applications like Microsoft Word. I played with the GDrive yesterday, and while there are still some bugs (error messages pop up when I dragged files onto the GDrive icon, rather than into specific folders), overall I found it to be as natural and easy as Memeo claims.

Memeo is adding another major feature to Connect 2.0 — the ability to search the full text of each document.

But there are already so many other syncing services out there. Online storage and collaboration startup Box.net launched its sync feature last week, and more-established consumer services like Dropbox and SugarSync also exist.

Now that Memeo has built a slick front-end, Director of Business Development Spencer Chen said it’s the Google backend that will be the biggest differentiator. Google has the name recognition and the security that smaller startups are going to have a hard time competing with, especially as they try to sell to larger companies, he said.

Chen argued that the document-sharing market will follow the same pattern as the Web-based email industry in the late 1990s, consolidating behind a few big players: “There’s just not room in the market for small, pure-play startups.”

Meanwhile, Memeo can provide the hybrid that businesses want between Google’s cloud storage and the desktop experience. The average company that has purchased or is evaluating Memeo Connect has 10,000 employees, and more than 40 percent of the 30 biggest customers of Google Apps (a bundle of business apps including Docs) are using or testing Connect, Chen said.

The company is backed by G-51 Capital and Foundry Group. Memeo Connect costs $9 per user per year (more of if you don’t already have a Google Apps Premier account).