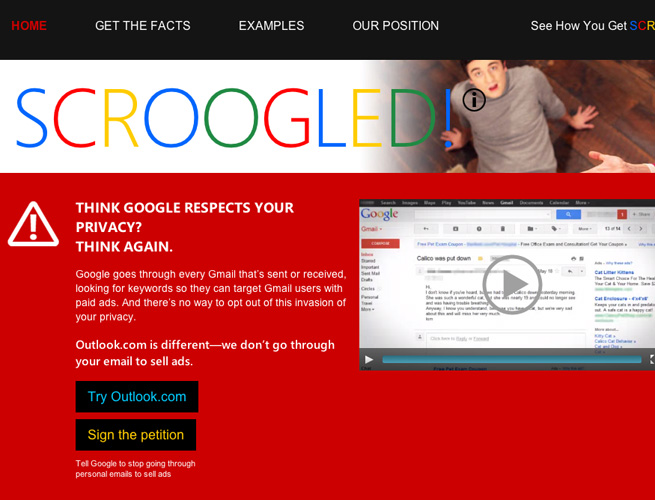 In November, Microsoft tried to go after Google’s credibility by claiming that Google Shopping results were all advertisements rather than fair comparisons of products around the web. Now it appears Microsoft is going after an even meatier target than Google Shopping by attacking Gmail.

The new Scroogled.com site from Microsoft makes the case that Gmail snoops on all of your emails to serve you better ads.

“Google goes through every Gmail that’s sent or received, looking for keywords so they can target Gmail users with paid ads,” the site claims. “And there’s no way to opt out of this invasion of your privacy.”

Some of what Microsoft is saying is true. Google does scan email keywords so it can contextually serve you advertising. However, it is clearly lying when it says there is no way opt out. As Marketing Land points out, you can not have Google reading your emails by using the basic HTML version of Gmail, using a third-party email client, or paying $50 a year for Google Apps and opting out that way.

Google has previously addressed privacy issues by saying that it walks a careful line between protecting users and serving ads.

“There is what I call the creepy line,” Google chairman Eric Schmidt said in 2010 at the Washington Ideas Forum. “The Google policy on a lot of things is to get right up to the creepy line and not cross it.”

And even as Google has addressed these issues, Gmail’s many users haven’t felt the need to leave. Google claims to have more than 425 million active monthly users on Gmail.

As an alternative, Microsoft is pushing its Outlook.com service, which is debuted in mid-2012 as a replacement to Hotmail. The site’s ad copy reads:

Outlook.com prioritizes your privacy. You won’t see ads based on keywords from your personal email. Your email is nobody else’s business. But Google makes it their business. Even if you’re not a Gmail user, Google still goes through your personal email sent to Gmail and uses the content to sell ads.

Our own testing of Outlook.com showed that it is a smart, modern service, but is harping about Gmail’s privacy enough to get people to switch?