Microsoft wants to help business developers tap into the explosive growth of Microsoft Teams. At Build 2020, the company launched a Visual Studio and Visual Studio Code extension for Teams in preview, introduced new integrations between its Power Platform and Teams, and announced a custom app submission process to help IT admins. Oh, and the company dropped a long list of upcoming Teams features. We had the opportunity to speak with Bhrighu Sareen, CVP of Microsoft Teams ecosystem, to discuss it all.

Teams is the company’s Office 365 chat-based collaboration tool that competes with Slack, Facebook’s Workplace, and Google Chat. It’s also Microsoft’s fastest-growing business app ever. That was true in 2018, long before the coronavirus pandemic started juicing up numbers for remote work and learning. As of April 29, Microsoft Teams had 75 million daily active users, up 70% from 44 million daily active users six weeks prior. Those are just people who use the Teams app every day — millions more likely use it only during weekdays or infrequently.

Sareen oversees building the Microsoft Teams platform. Among other responsibilities, he helps three groups of developers build apps for Teams: corporate developers, independent software vendors (ISVs), and Microsoft partners. But they can already build apps, so what’s new at Build 2020?

First, Microsoft announced a bunch of new Teams tools to “streamline app development.” Frankly, it seems like a jumble of overlapping additions for developers to sort through. It turns out that’s on purpose.

“A lot of platforms have a particular way to build,” Sareen said. “You have to follow that to build an application on that platform. In our mind, Teams has enabled multiple ways and welcomes developers across the board to come and build. It’s a continuum in my mind. On one end of the spectrum is native applications that people can build today for Teams. On the other end of the spectrum is the simplest, empowering, and democratizing development of applications for anybody in the company.” You probably already guessed it: The former is Visual Studio and the latter is the Power Platform.

The new Visual Studio and Visual Studio Code extension lets you build project scaffolding, configure features, create app package manifest and setup hosting, and validate app packages. Why is an extension even required to build Teams apps? Sareen gave an example: Say you want to build a bot for Teams in under 10 minutes. “Having the right templates, the code samples, and all the other capabilities that you need right away at your fingertips — that’s why we invested in this,” Sareen said. “It made it a lot … easier and reduced the friction.” 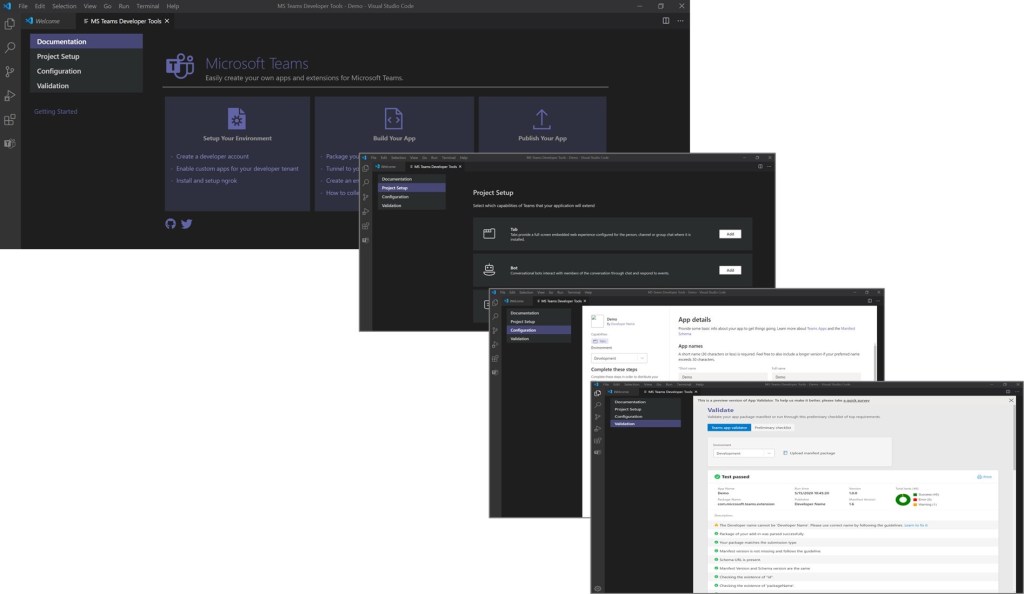 The extension can even start the app publishing process (for yourself, to your organization’s catalog, or to the Teams app store). More on that process later.

Next, Microsoft unveiled Power Platform integrations with Teams that let you build low-code/no-code experiences with custom apps, workflows, bots, and dashboards for your team and customers. They’re all coming over the next two months:

Then there’s the Microsoft Graph, a key component of the company’s AI strategy. The Microsoft Graph APIs for Teams have gained 24 new granular permissions for app data access authorization. Developers and admins can narrow the app’s access and scope to a specific team’s set of data, as opposed to all team data. 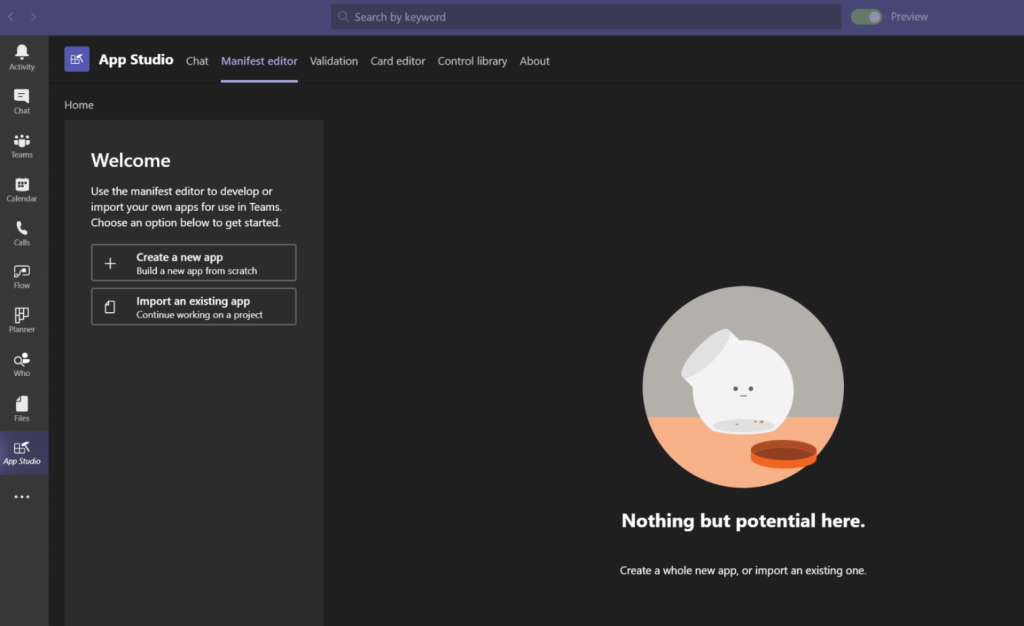 There are a few more tidbits worth noting. Microsoft today released App Studio version 1.4.0 for Microsoft Teams. Updates include support for app manifest schema 1.6, an advanced section in app details, an app package validation tool to run tests that extend outside the basic schema validation, and better error handling via a bot framework connection. 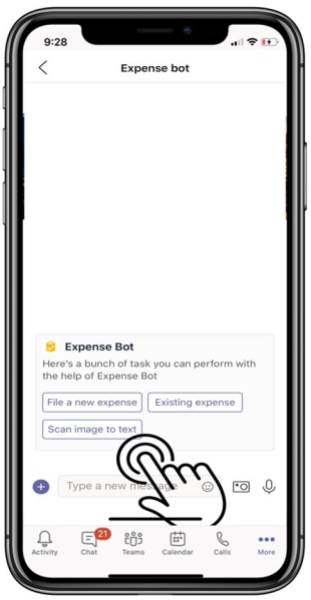 Finally, Microsoft shared that later this year developers will be able to extend their app’s capabilities by connecting to a mobile device’s camera, location, and microphone. The company showed off a Teams bot managing expense reports using a phone’s camera.

After developers build an app, they have to coordinate with business decision makers and IT admins to deploy it. Apparently, that workflow isn’t very smooth. Developers and admins will soon have a proper app submission process and better app management capabilities.

“Once apps get built, distributing them — doesn’t matter what platform it is — is always a bit of a pain,” Sareen said. “Especially if you’re a bigger organization, how do you ensure that it is secure, it’s compliant, and no one’s spamming everybody in your organization?”

Developers will soon be able to submit Teams apps to the App Submission Microsoft Graph API via App Studio, Visual Studio, Visual Studio Code, Power Apps, and SharePoint Framework. The apps will go directly to the Teams Admin Center for IT admins to review and approve.

“Once you build the application in your IDE, with a single click you can submit to your tenant admin,” Sareen said. “Most people in big organizations don’t even know who their tenant admin is. So this will make it easy. You just submit it, the tenant admin gets it. In the Teams Admin Center they actually verify, approve, and publish. This process will make it easier for any developer in an organization, for any workflow or business process they have built for themselves or for their work group, to share it broadly across the organization. That is the key. Because right now, every developer can build their own stuff, but it’s only limited to them.”

Speaking of the Teams Admin Center, IT admins will soon get new capabilities for managing Teams apps. A new Manage Apps view will show all apps in your tenants — including app certification, approval status, and licensing status. 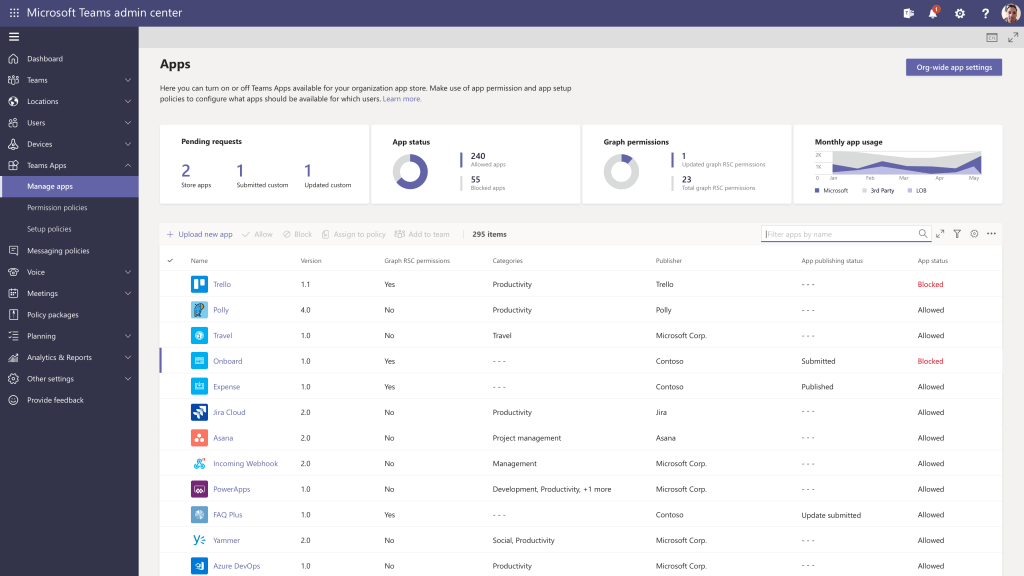 Also, a new third-party subscription purchase experience will let you view and purchase subscriptions associated with third-party Teams apps. Custom templates will let you create pre-defined channels, tabs, and apps for your users. Finally, new Microsoft Graph API permissions will let you grant consent on behalf of the entire tenant or install an app to a specific team.

Microsoft Teams is also getting a slew of new features rolling out now, soon, and later this year. Here is a quick rundown:

That last feature is going to change how people use Teams quite a bit: 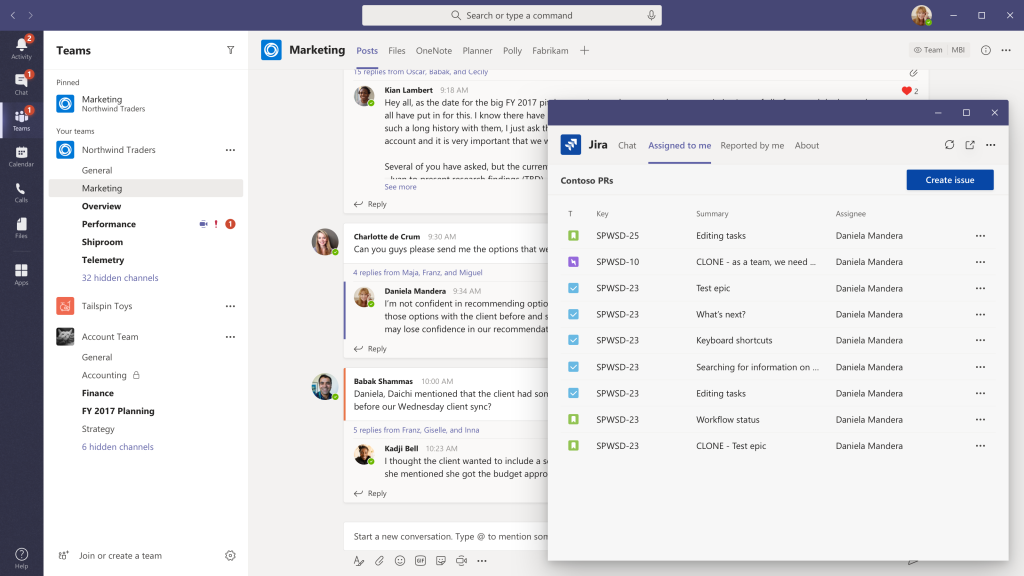 You might think that not all of these features apply to business developers. Not so.

“We want to make sure developers are successful,” Sareen said. “And developer success is around engagement and monetization. Making our partners successful is a top priority for the next 12 months for us.”