Load testing is a software testing technique that involves deliberately putting high demands on a website, database, network, or application to see how it responds — it essentially helps determine how well a system copes with a lot of concurrent users. Companies can configure different load tests to replicate different scenarios, for example to see what happens if X number of people tried to checkout from their online store simultaneously.

Load testing fits into the broader software performance testing and QA spheres, which might include everything from cross-platform web testing to continuous profiling for cutting cloud bills — it’s all about ensuring that an application is robust and optimized for every potential scenario, minimizing outages and downtime for software in production environments.

Companies have a number of options at their disposal for conducting load testing on their systems, including open source tools such as Apache JMeter, or LoadRunner from Micro Focus. And earlier this year, observability giant Grafana Labs acquired the creators of an open source load testing tool called K6.

But as its name suggests, Azure Load Testing is very much designed with Azure customers in mind. This includes integrated Azure resource management and billing, and integrations with related products such as Azure Monitor, Microsoft’s monitoring tool for applications, infrastructure, and networks. 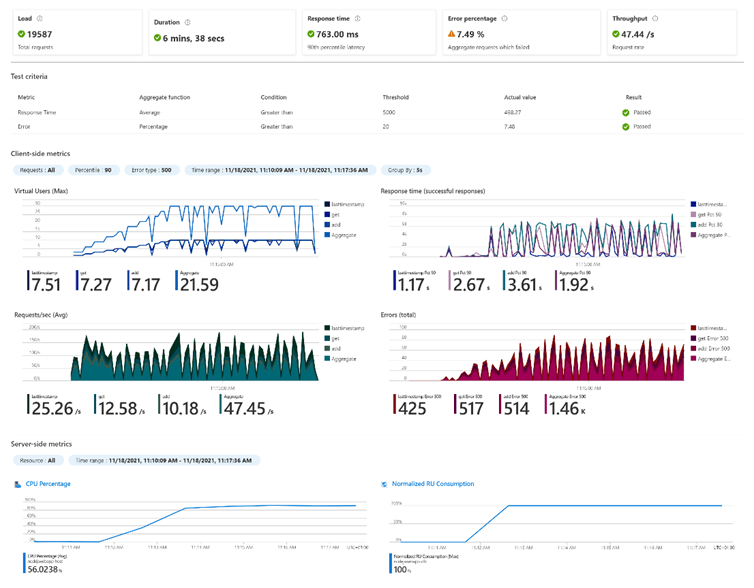 Above: Performance insights in the Azure Load Testing dashboard

It’s worth noting that Microsoft previously offered the Azure Devops load testing service, which it deprecated in March last year. At the time, Microsoft cited limited adoption for the service while acknowledging that there were better alternatives on the market. So, what has changed in the intervening 20 months?

And so Microsoft took what it learned from its previous load testing endeavors and started from the beginning. For its initial “preview” launch, Azure Load Testing will support companies using Apache JMeter, which is in keeping with Microsoft’s broader open source adoption over the past seven years or so.

“Azure Load Testing is designed from the ground up, embraces open source, and has a specific focus on Azure customers and delivering Azure-optimized capabilities,” Whaley added. “We believe this is where we can provide differentiation in the market and where we can provide the greatest value for our customers.”

This also helps to highlight one of the key benefits of open source software — it enables companies to build on top of existing technologies that have traction and are widely understood by the software development fraternity. And by packaging a managed service on top of JMeter, this saves companies from having to manage all the infrastructure side of load testing themselves.