At Microsoft’s Build 2017 developer conference, the biggest Visual Studio news wasn’t even for its own platform: Visual Studio 2017 for Mac has hit general availability (download here, requires OS X El Capitan 10.11 or higher). Developers can now use Microsoft’s flagship integrated development environment (IDE) across Windows and Mac to build for the cloud, mobile, and the web.

“Developers get a great IDE and a single environment to not only work on end-to-end solutions — from mobile and web apps to games — but also to integrate with and deploy to Azure,” Scott Guthrie, executive vice president of the Microsoft Cloud and Enterprise group, said in a statement. “Whether you use C#, F#, .NET Core, ASP.NET Core, Xamarin or Unity, you’ll get a best-in-class development environment, natively designed for the Mac.”

Bringing its IDE to macOS is a big milestone for Microsoft, given that the company once made a point of locking in developers by only offering its tools on Windows. This has changed over time, with a big highlight in April 2015 when Microsoft launched Visual Studio Code, its cross-platform code editor, for Windows, Mac, and Linux. Then, in November 2016, Visual Studio for Mac arrived in preview (the “2017” was only tacked on today for branding consistency). Now it’s out of preview. 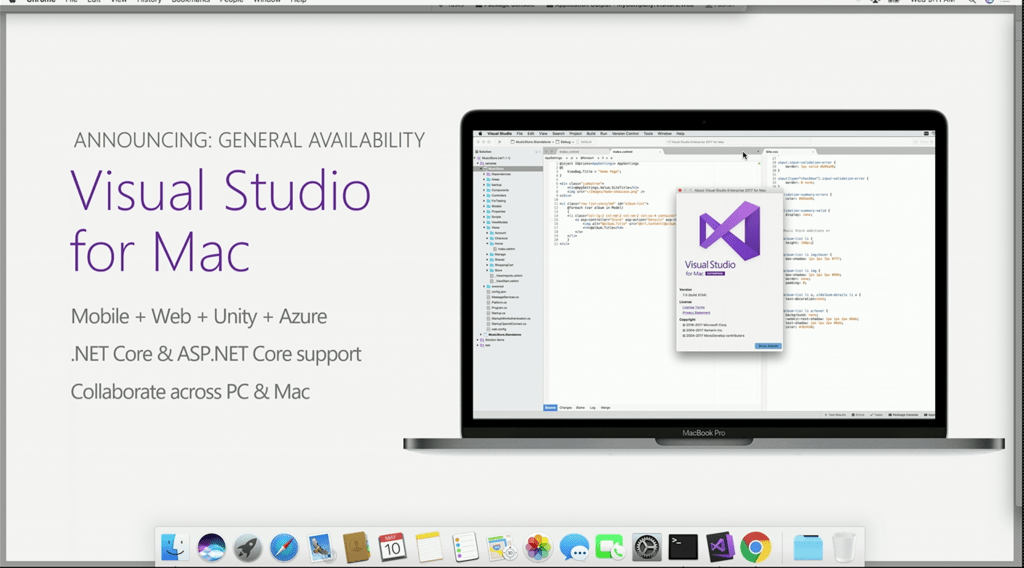 Inheriting from the mobile-centric Xamarin Studio and from Visual Studio for Windows, the IDE is supposed to encourage Mac and iOS developers to use Microsoft’s development tools, since they will no longer need a Windows computer or virtual machine to do so. Microsoft plans to eventually sunset Xamarin Studio.

Visual Studio for Mac supports native Android, iOS, and Mac development via Xamarin, and server development via .NET Core with Azure integration. The C# language, with the latest C# 7 productivity enhancements, is naturally supported, as is F#, powered by the same F# compiler used in Visual Studio.

Microsoft also had some smaller Visual Studio news to share at Build. The new Visual Studio Snapshot Debugger, for example, gives developers insight into cloud production code behavior at the time of an exception, without writing extensive logging statements or exception handling code.