OneNote, Microsoft’s tool for managing freeform notes, has been around for more than a decade. But it’s started gathering steam lately, with a twofold increase in users last year and a steady drumbeat of new features, OneNote’s general manager told VentureBeat.

For instance, Microsoft today added optical character recognition (OCR) support on all platforms, and updated the iPad app with handwriting and drawing support.

This is part of a trend toward embracing multiple platforms and adding features aggressively, Microsoft’s Eran Megiddo explained. The team has “spent the year breaking out of the mold, going to more form factors and platforms,” as Megiddo put it.

Not so long ago, OneNote was mainly a Windows affair. Sure, apps slowly arrived for other platforms, but they offered very basic features. Over the past few months, that has rapidly changed. New features are now being added every few weeks, as opposed to every few years like the typical Microsoft Office cadence, and “these days we’re closing that gap [Windows compared to other platforms] rapidly,” Megiddo said.

Today’s release is a perfect example: Previously, OCR support was only available in OneNote for Windows. The feature was moved today from the Windows app to the cloud, and suddenly, all platforms can leverage it.

The big turning point for OneNote arguably came in March 2014, when Microsoft launched OneNote for Mac as a free release and began offering a freemium version of OneNote for Windows (it went completely free just last week).

In fact, Megiddo told VentureBeat that OneNote doubled its monthly active users in 2014. Megiddo noted that the team saw a “big elbow in the graph” after making OneNote free. While going free naturally helped, it wasn’t the only factor: He says OneNote is on track to double the number of active users again in 2015.

While year-over-year growth can be a tricky metric (Microsoft refused to provide exact numbers), it’s still quite an achievement for a service that has been around for 12 years.

Note that the company isn’t simply talking about installations: These are active users, so all those enterprise customers that get OneNote preinstalled on their computers along with Microsoft Office but don’t ever use it? They aren’t being counted.

For scale, OneNote’s chief competitor Evernote had 100 million users in May 2014, though it didn’t share how many of those are actively using the service. Google has yet to share user numbers for its own Google Keep solution.

The other factor pushing OneNote growth is, naturally, mobile. For the better part of a decade, OneNote was only for Windows users. Now, like the rest of Microsoft, the OneNote team is all about cross-platform, mobile, and the cloud.

The first use case has always been note-taking on a desktop or laptop, “long-form note-taking” and “visual notebook scenario” as Megiddo put it. The second, arguably much bigger, use case is capturing and recalling anything a user wants to remember, i.e., storing quick notes for later. 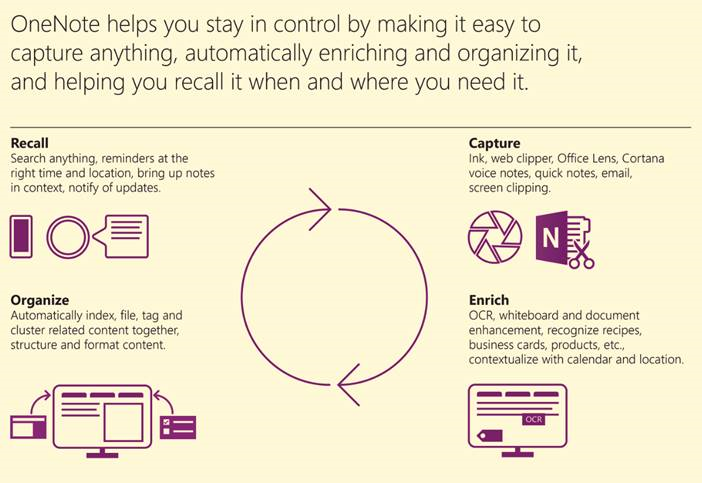 Megiddo explains that his team is developing OneNote with four pillars in mind: capture, organize, enrich, and recall.

Capture refers to taking that initial note. Whether it’s quickly jotting down a thought or snapping a picture of some scribbles, it should be transferable to OneNote as quickly as possible. Going forward, Microsoft wants to bring ink support to all platforms, boost image interpretation, and advance meeting recordings.

Organize and enrich are tied together, and are of course necessary for the final step. Being able to shape how your content is formatted and add to it after the capture ensures it is accessible and searchable. There is a lot of automation possible here, with analysis of text and automatic grouping. For example, OneNote can already recognize recipes, then tag and automatically format them, but that feature needs to, and will, be, expanded to more types of content, Megiddo said.

Recall refers to being able to find what you’ve saved when you need it. OCR support will be expanded to support handwriting, as opposed to just typed text, so you can search for content that you or someone else wrote on paper, a whiteboard, a chalkboard, someone’s forehead, etc. Lastly, reminders need to improve and work with where you are (walk into a meeting or classroom, and the corresponding OneNote notebook will open automatically).

Megiddo pointed out that many users still email or SMS themselves so they don’t forget something. Microsoft sees this as proof that the reminders problem still isn’t solved yet.

At a higher level, the OneNote team wants to simply continue to reduce friction. As Megiddo put it, the ultimate goal is to “compete with paper” and “still be able to differentiate.”

Going forward, a lot of the incoming features will also be platform-specific. This is a no-brainer: Each platform offers unique opportunities. Recent examples include Touch ID support on iOS and Android Wear support.

OneNote is also showing up on devices (tap the Surface Pro 3‘s pen to fire up the app) and in other software (think Project Spartan, the new Windows 10 browser). Megiddo hinted that there is more to come: The company isn’t happy with simply putting OneNote on more platforms — it wants new products (everything from smartphones to digital whiteboards) to come with OneNote out-of-the-box.

Last but not least is what looks like a cliché at first: Many of the features that Microsoft adds are driven by customer feedback. Put simply, OneNote wants to “push whatever is driving usage,” Megiddo said. The company uses various channels to track what’s needed, but the real driver is OneNote UserVoice, a web forum.

In fact, both expanded OCR support and iPad drawing were requested via the website. If all of the above upcoming features we mentioned aren’t enough, check there for what could be next. The OneNote team is simply much more responsive now, so if you’re itching to get a new feature, that’s where you’ll want to cast your vote.