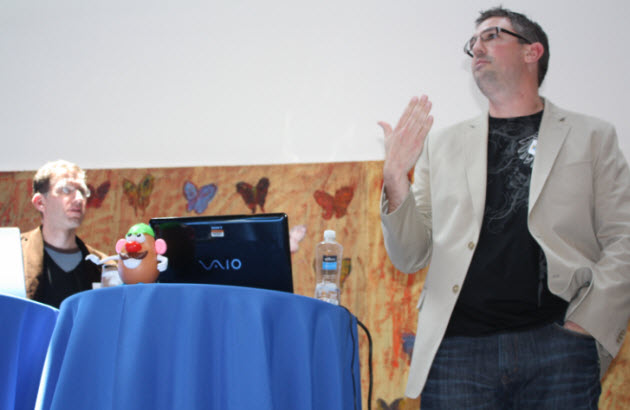 Microsoft showed off the next version of its Internet Explorer browser today, proving that it can make a big technological leap by displaying web pages that use rich graphics or high-definition video.

The company isn’t yet saying when it will release IE version 9, but this is the third time Microsoft has released details of the new browser. And now some of the cool visuals are becoming more evident. The announcement today shows the next-generation of web browsers will mark a revolutionary step for the web, since ordinary web sites can now use the graphics and video associated with native applications stored on a hard disk drive. Microsoft is leading a charge here, but it’s also a step that the entire web will take and one that other browser makers such as Mozilla and Firefox could potentially duplicate.

IE 9 has been designed with standards such as HTML5 in mind. It can take advantage of Microsoft’s DirectX 10 applications programming interface (a software translation layer) that allows the web browser to make use of the hardware in the computer that is being used. If that computer has a discrete graphics chip and a fast microprocessor, then IE 9 will take advantage of that hardware.

That’s a big step forward for graphics chip makers Advanced Micro Devices and Nvidia, both of whom were present at Microsoft’s IE 9 event in San Francisco today. In the past, games and specialty programs such as Adobe’s video editing software tapped the graphics chips for hardware acceleration. But browsers relied upon the microprocessor alone. That’s because web browsers have to run on every single computer, from netbooks to high-end gaming rigs. And many low-end computers didn’t have discrete graphics chips; rather, they relied upon relatively weak graphics components embedded inside Intel’s chip sets. Those chip sets didn’t have the power to display rich graphics.

And that held back web designers, who had to create sites that could be visited by users with low-end computers. With IE 9, the browser is smart enough to figure out what hardware is present and use 100 percent of it to deliver a better web experience. (And it will still run even if there is no discrete graphics chip).

“This is a seismic shift for the web,” said David Ragones, product marketing manager at Nvidia. “It is a GPU (graphics processing unit) enabled web.”

David Hott, director of strategic initiatives in the graphics division at AMD, said that getting the web browser to use the graphics chip is a much more mainstream application, and it will help pull graphics-based computing forward by leaps and bounds.

“Now the browser is using the full power of your computer,” said Lane McCullogh at Dell.

Microsoft now has dozens of examples of rich web sites that use the graphics processing power. It showed off a couple of apps today. One was a web site that showed an animated fish aquarium where you can add lots of fish to the scene. Rob Mauceri, group program manager of Internet Explorer at Microsoft, showed that he could easily add 100 swimming fish to the aquarium. The scene could still display the images at 60 frames per second. By contrast, the current Firefox and Google Chrome browsers could display images only at about 20 frames per second, which was obviously much slower.

The rivals are likely to do their own faster versions of HTML5-based web browsers as well, but it won’t be quite as easy, since they have to make their browsers work across many more platforms. Microsoft, meanwhile, can focus on making IE work on its Windows software. HTML5 is the next major version of the software language (hypertext markup language) for creating web sites. It is still in development, but many parts of the standard are stable and are being used in web software.

Microsoft’s last web browser, IE 8, debuted in March 2009. Ryan Gavin, senior direct of IE, said the company is on track to ship the next one but did not say when. He said that since the company posted its first framework for the browser in March, developers have downloaded it more than 2 million times. A second framework was released, and that has been downloaded more than a million times. Microsoft has not yet launched a beta browser, so an actual launch isn’t that close.

In some respects, Microsoft is playing catch-up with other browser makers. The IE9 platform, which includes Microsoft’s new JavaScript rendering engine (codenamed “Chakra”), has support for emerging web standards like HTML5 Canvas audio and video tags, CSS3 and SVG2 as well as HTML5. Check out the videos below. The first features Ragones from Nvidia, and the second is Mauceri from Microsoft.