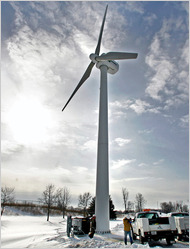 In Minnesota, the wind is blowing but turbines aren’t turning. The machines, bought used from California and installed last fall, are completely frozen in place. Even on the windiest days, the blades sit at a standstill, producing no power. Why should anyone care? The problem highlights some of the less intuitive challenges associated with wind power — long considered to be the most feasible and cost effective source of renewable energy.

The likely culprit in Minnesota: frozen hydraulic fluid, unfit for the state’s brutally cold winters. As the temperature continues to drop, these fluids have started to thicken, turning into jelly. This is a big problem, considering how much the Midwest has spent on trying to become the U.S.’s wind power corridor. Wind power is already intermittent — the wind isn’t blowing at gale speeds all the time. But being knocked out of commission for an entire season? That could be a deal breaker.

That is, unless the problem can be fixed. The turbines, each more than 100 feet tall in 11 Minnesota cities, were purchased for $3.3 million — but now even more must be sent to retrofit them for the cold. The first stab at the problem will be to fix heating devices to the turbines to keep the fluid at the right temperature. But this will rob power from the turbines, maybe even negating their usefulness. There’s also a chance this solution won’t work at all.

As new sources of renewable energy are developed — like thin film and solar thermal, for example — more and more doubts about wind are coming to the fore. One of the biggest: the true meaning of energy “capacity.” When you say a turbine has a certain capacity, you’re saying it can produce that amount of energy when it is working under optimum conditions. But no turbine works at maximum capacity around the clock — the figure is misleading. In fact, many turbines operate far below capacity most of the time.

So when journalists write about the 735-megawatt wind installation at Horse Hollow — they should note that the 47,000 acre wind farm will probably generate less than a 300-megawatt coal, natural gas or nuclear plant. Coal and nuclear operate at above 85 percent of capacity on average. Wind installations operate at about 33 percent of its capacity on average. Horse Hollow only produces about 245 megawatts on a routine basis — a lot, but not as much as advertised.

Minnesota’s frozen wind turbines, each more than 20 years old, may be highlighting brand new concerns about over-reliance on wind as a renewable energy source — but even if it were summer and the blades were turning, there’s still a lot of room for improvement in this sector.