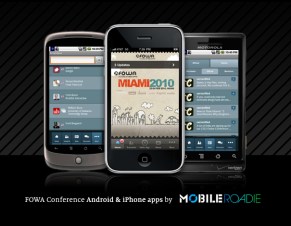 Ashton Kutcher, Dolly Parton and Madonna are among the big names who have iPhone apps built on Mobile Roadie’s platform. Taylor Swift has an app in the works. Just in time for that, Mobile Roadie now supports the Android platform, too.

“Integration with YouTube, Brightcove, Flickr, Twitpic, Ustream, Topspin, Google News, RSS, Twitter, and Facebook ensures the App stays fresh and relevant,” CEO Michael Schneider wrote in a prepared statement. The idea is to bring these disparate sources together into a single point of interaction with a single brand name on all.

MR’s two-platform move is part of an inescapable trend: Developing for iPhone or Android alone is less and less of a wise business decision. Consumers will soon expect their friends’ apps to work on their own smartphones, too, no matter which brand.

We’d looked into iPhone apps before and have been considering it for over a year but held back because only being on the iPhone felt closed. In the U.S. you can only have it on AT&T, where as Android is a very open system. There’s tons of carriers and manufacturers supporting Android, which has proven to be used not only on the phone but also netbooks. Every day on the internet I see a new Android mobile internet device. To work with a company like Mobile Roadie who can put it on the iPhone and Android markets opens us up to a larger user base because not everyone is going to have an iPad or iPhone.

How much extra work does it take to build for two platforms instead of one? CEO Michael Schneider emailed me: “To create an app for android and iPhone at the same time requires no extra work for our customers – they use one content management system and setup process to power both.” Mobile Roadie created their Android client — the part that runs on the phone — from scratch, to take advantage of the phone’s native capabilities. But it’s attached to the same Mobile Roadiet content management system as the company’s iPhone app. So new content goes everywhere at once.

Mobile Roadie was founded in 2008. The company, based in Santa Monica, California, is privately funded.