Firefox 63 for the desktop is available for download now on Firefox.com, and all existing users should be able to upgrade to it automatically. As always, the Android version is trickling out slowly on Google Play.

Firefox 63 for desktop brings support for Enhanced Tracking Protection. To explain this feature correctly, we must look at its predecessor.

Mozilla added Tracking Protection to Firefox 42’s private browsing mode in November 2015. It blocks website elements (ads, analytics trackers, and social share buttons) that can track you while you’re surfing the web. The feature’s blocking list, which is based on the tracking protection rules laid out by the anti-tracking startup Disconnect, is published under the General Public License and available on GitHub.

With the release of Firefox 57 (Firefox Quantum) in November 2017, Mozilla added an option to enable Tracking Protection outside of private browsing. Tracking Protection isn’t on by default because it can cause websites to break, as well as cutting off revenue streams for small websites and content creators who depend on third-party advertising.

In August, Mozilla announced Firefox would block trackers by default in three steps:

That schedule has changed with today’s Firefox 63 release. 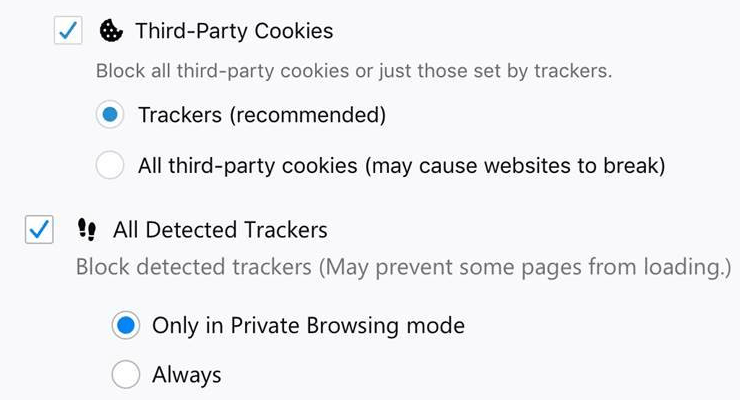 Firefox 63’s Enhanced Tracking Protection blocks cookies and storage access from third-party trackers, which Mozilla says targets the problem of cross-site tracking without breaking sites and impacting revenue streams like the original Tracking Protection. It does this by preventing known trackers from setting third-party cookies — the primary method of tracking across sites — but still gives you the option to block all known trackers (under Firefox Options/Preferences).

As for blocking trackers that cause long page load times, Mozilla says it is still tweaking the design:

Why? There are a number of reasons: the initial feature design was similar in nature to the original Tracking Protection functionality (including ad blocking) but blocking only occurred after a few seconds of page load. In our testing, there was a high degree of variability as to when various third-party domains would be blocked (even within the same site). This could be confusing for users since they would see blocking happen inconsistently.

A secondary motivation to block trackers and ads on slow page loads was to encourage websites to speed up how quickly content loads. With the tested design, a number of factors such as the network speed played a part in determining whether or not blocking of trackers and ads would occur on a given site. However, because factors like network speed aren’t in the control of the website, it would pose a challenge for many sites, even if they did their best at speeding up content load. We felt this provided the wrong incentive – it may cause sites to prioritize loading ads over content to avoid the ads from being blocked, a worse outcome from a user perspective.

It’s not clear if the next version of Firefox will included these changes, but either way we’ll be hearing more about Mozilla’s approach to blocking trackers in 2019. 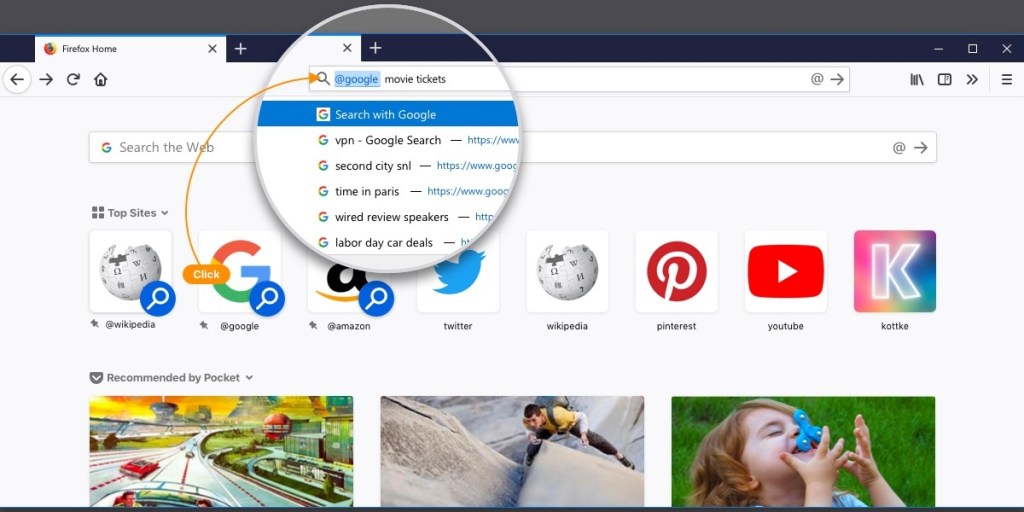 Search shortcuts essentially pins sites like Google and Amazon on the new tab page. When you click or tap them, you’re redirected to Firefox’s awesome bar, which automatically fills the corresponding keyword (@google or @amazon in this case) for the search engine. This way, you can type your query, hit enter, and get your search results without having to first load the Google or Amazon homepage.

This feature is a bit of an experiment, and thus limited in scope: It only works for U.S. users. You can remove the default Google and Amazon top sites (click on the dots icon and select “unpin”) and add your own (click on the three dots on the right side of your Top Sites section and select “Add search engine”).

If you’re a web developer, more details are available for you here: Firefox 63 for developers.

The only major new feature for this Firefox for Android release is a picture-in-picture mode (Android Oreo and up). This means that if you’re watching a video in full-screen, when you switch away from Firefox it will move the video into a small floating window, which you can tap to return to the full video player.