Mozilla today started rolling out Enhanced Tracking Protection (ETP) 2.0 in Firefox. While the company technically launched Firefox 79 for Windows, Mac, and Linux last week, it only unveiled its marquee feature today. Firefox 79 by default blocks redirect tracking, also known as bounce tracking, and adds a handful of new developer features. You can download Firefox 79 for desktop now from Firefox.com, and all existing users should be able to upgrade to it automatically. According to Mozilla, Firefox has about 250 million active users, making it a major platform for web developers to consider.

While Google and Microsoft had to adjust their respective browser release schedules due to the coronavirus pandemic, in April Mozilla committed to sticking with its 2020 Firefox release schedule and the browser’s four-week release cadence. While the schedule remains unchanged, Mozilla shifted its roadmap to avoid shipping changes that might negatively impact government and health service websites and to address video conferencing issues.

Before we dive into Enhanced Tracking Protection 2.0, which is rolling out over the next couple weeks to protect against redirect tracking, it’s important to look at the foundation it is built on. Over the past two years, Mozilla has been boosting Firefox’s privacy chops. Other browser makers have made similar strides. While this is a win for browser users, the online advertising industry and the businesses that depend on it have to come up with alternatives.

Since enabling Enhanced Tracking Protection by default, Mozilla says it has blocked 3.4 trillion tracking cookies. But the company notes the ad industry has since created workarounds and new ways to collect user data as you browse the web. 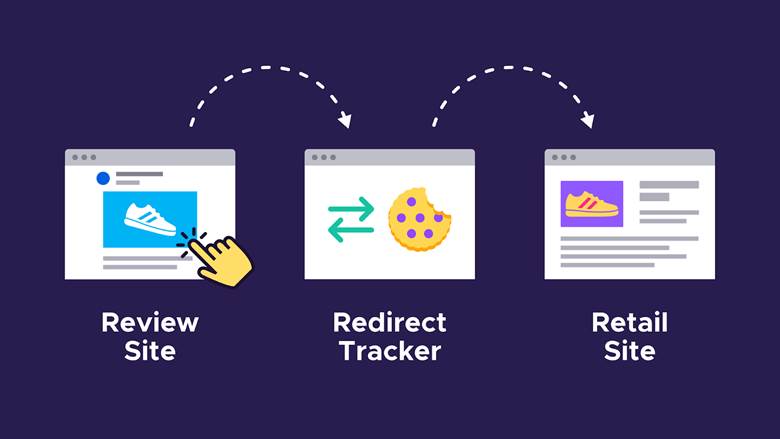 Redirect tracking goes around Firefox’s built-in third-party cookie-blocking policy by passing the user through the tracker’s site before taking them to the desired website. This lets the tracker see where you came from and where you are going. Here is how Mozilla explains it:

Let’s say you’re browsing a product review website and you click a link to purchase a pair of shoes from an online retailer. A few seconds later Firefox navigates to the retailer’s website and the product page loads. Nothing looks out of place to you, but behind the scenes you were tracked using redirect tracking. Here’s how it happened:

Step 1: On the review website you click a link that appears to take you to the retail site. The URL that was visible when you hovered over the link belonged to the retail site.
Step 2: A redirect tracker embedded in the review site intercepts your click and sends you to their website instead. The tracker also saves the intended destination — the retailer’s URL that you actually thought you were visiting when you clicked the link.
Step 3: When the redirect tracker is loaded as a first party, the tracker will be able to access its cookies. It can associate information about which website you’re coming from (and where you’re headed) with identifiers stored in those cookies. If a lot of websites redirect through this tracker, the tracker can effectively track you across the web.
Step 4: After it finishes saving its tracking data, it automatically redirects you to the original destination.

Enhanced Tracking Protection 2.0 attempts to address this by checking to see if cookies and site data from those trackers need to be deleted. The feature stops known trackers from accessing your information by clearing their cookies and site data every 24 hours. Because you look like a new user the next time you visit the tracker (after 24 hours), they can’t build a long-term profile of your activity.

To be clear, Firefox tries not to clear cookies for services you engage with, such as search engines, social networks, and your email account. The browser leaves sites that you have interacted with in the past 45 days, even if they are trackers. The hope is that you stay logged into the sites you frequent but are not tracked indefinitely based on sites you’ve only visited once.

For the full rundown, here’s the Firefox 79 for desktop changelog: