In addition to the debut of the Firefox Developer Edition, Mozilla today announced new features for its main Firefox browser. The company is launching a new Forget button in Firefox to help keep your browsing history private, adding DuckDuckGo as a search option, and rolling out its directory tiles advertising experiment.

Firefox is normally updated every six weeks (Firefox 33 arrived on October 14), but this is a minor release in conjunction with Firefox’s 10-year anniversary. You can download Firefox 33.1 for Windows, Mac, Linux from Firefox.com and for Android from Google Play. 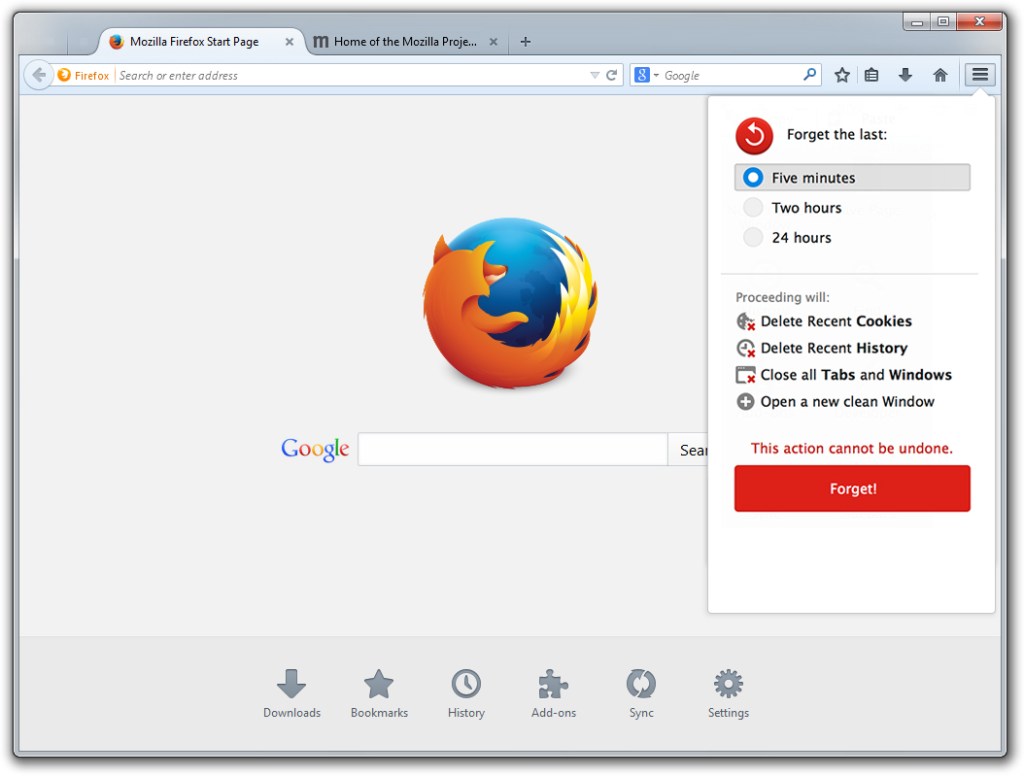 Mozilla pitches the Forget button as a complement to its private browsing mode, giving users more control over how history is recorded. It has a slightly different use case: If you’re using a shared computer and find yourself on a site you didn’t want to open, you can hit the button to let Firefox know that you want to forget the most recent browsing history.

Pressing the button will offer a drop down menu where you can select to forget the last five minutes, two hours, or 24 hours (there’s no custom option, as Mozilla says it wants the experience to be quick). You now have a clean slate and can continue your browsing; it’s like the previous events never happened.

Next up, Firefox has added DuckDuckGo as a new search option. Mozilla tells VentureBeat that DuckDuckGo works just like all the other search engines the company includes in its browser; there are no additional or missing features.

DuckDuckGo has a reputation for protecting searchers’ privacy as it doesn’t track your queries. This makes it a perfect match for Mozilla’s browser. Indeed, the company says users have been asking for the option out-of-the-box (just like any other major browser, Firefox lets you add search engines yourself).

After experimenting with adding ads to Firefox Nightly in late August, Mozilla is now ready to start pushing its sponsored directory tiles to all Firefox users. Previously, Firefox’s new tab page would remain empty until you established a browsing history.

When you first launch Firefox now, a message on the new tab page will inform you what tiles are (with a link to a support page about how sponsored tiles work), promise that the feature abides by the Mozilla Privacy Policy, and remind you that you can simply turn tiles off. If you do turn them off, you’ll get a blank new tab page and will avoid Firefox’s ads completely.

Firefox users should “expect a lot more experimentation in advertising,” Mozilla Senior Engineering Manager Gavin Sharp told VentureBeat. That may not be what most want to hear, but Mozilla is eager to find new revenue streams, as long as it manages to keep the privacy of its users intact.