Mozilla has launched its virtual private network (VPN) service to the public, starting with Windows 10 and Android in a handful of markets. The company debuted the browser-based Firefox Private Network last September as part of a pilot program. In June, Mozilla revealed it would soon be launching the VPN as a standalone cross-platform product for $4.99 per month and rebranding it as Mozilla VPN.

Fast-forward a month, and the Firefox browser maker has officially launched Mozilla VPN out of beta in the U.S., Canada, the U.K., Singapore, Malaysia, and New Zealand, with plans to roll it out to additional markets later this year. It’s also worth noting that while an iOS incarnation was part of the beta phase, it doesn’t appear to be available at the initial rollout. Versions for Mac and Linux are also currently in development.

Mozilla’s launch is timely, as VPN use has surged over the past few months due to lockdown measures that have required workers to connect to corporate networks remotely. While Mozilla isn’t specifically targeting the corporate sphere with its new VPN, the company is hoping to gain hearts and minds by positioning Mozilla VPN as a privacy-focused product that is monetized entirely through subscriptions rather than by selling user data — there is no free version. 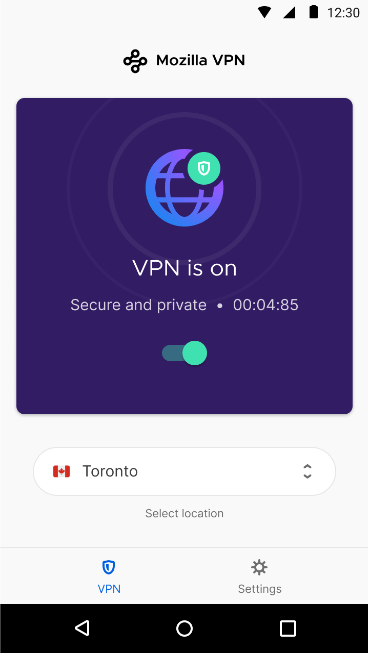 Mozilla VPN runs on a global network of servers operated by Mullvad, a commercial open source VPN service based in Sweden that has a “no-logging” policy. This means it promises to not record a user’s IP address, browsing activity, session duration, timestamp, DNS request, or similar data points. Mullvad has also adopted the lightweight WireGuard protocol, which should make Mozilla VPN speedier than many other VPNs on the market.

It is worth noting that Mozilla VPN requires a Firefox account, which means the VPN receives the subscriber’s “email address, locale, and IP address” when they use the service. The IP address, according to the privacy policy, is used to “approximate your location, because Mozilla VPN is currently only available in certain countries.” Additionally, Mozilla VPN sends Mozilla “basic information” relating to the version of the app and devices it’s installed on, including the operating system and hardware configuration. However, Mozilla said it doesn’t retain user data logs.

Mozilla VPN might not be the ultimate privacy-focused VPN, but it does ship from a well-known consumer brand that has committed to making money through good old-fashioned paying customers. “We don’t partner with third-party analytics platforms who want to build a profile of what you do online,” Mozilla proudly proclaims.