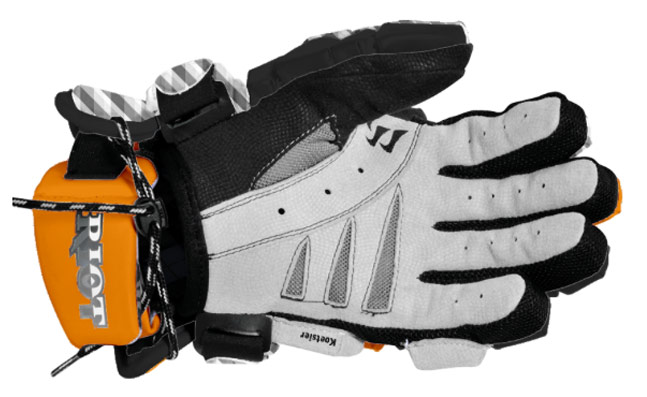 MONTREAL — You’ve heard the bit about the best way to make money during the gold rush, right? It’s not joining the mob of prospectors, but selling them pickaxes and shovels.

That’s the idea behind MyCustomizer, a new startup just graduating out of FounderFuel, one of the premier accelerators in Canada, based in Montréal, Québec. I had breakfast with MyCustomizer’s chief executive, Christian Painchaud (literally, “warm bread”) at Pikolo Espresso this morning in downtown Montréal.

Between café au lait and various other waistline-enhancing Québecois delicacies, Painchaud shared his vision of the future … and his startup.

“When we buy something, we express ourselves,” he told me. “Fitting in is not cool anymore. The maker movement is a growing phenomenon, as is mass customization, which promotes local manufacturing and customized products. all these things are coming together.” 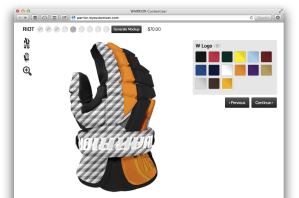 Above: The ice hockey glove I customized with MyCustomizer’s solution

That’s a good thing for both consumers and the environment — the most environmentally friendly product is the one that’s not built — and custom products ensure just-in-time manufacturing and the least possible waste, but it’s not an easy vision for companies to execute on.

Nike, for instance, spent $30 million over the course of a year’s worth of custom development to build the customization engine behind the personalized NikeID shoes, Painchaud told me. Reebok spent more millions building its own personalization tool.

Both of those efforts were one-off developments. That’s the problem MyCustomizer wants to fix.

Originally part of Warrior, a sporting goods company focusing on hockey and lacrosse equipment, the team focused on building a web site where clients could customize their own hockey gloves or other equipment. At the time, Painchaud was a financial analyst for a mining company. 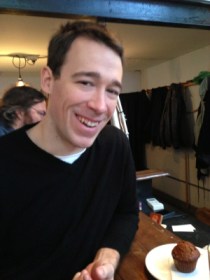 Above: Christian Painchaud, at breakfast

When the team realized there was a larger niche, it started a company to focus on customization for other companies as well. Now it’s built a cloud-based service that can simply plug into any brand’s website, just like you’d embed a YouTube video, and the goal is between one and five percent of any consumer vertical.

“Our strategy is that customization is a strategy that is going to be adopted more and more by companies,” said Painchaud.

The startup has created a dashboard for businesses to do most of the work in creating an online customizer for themselves. Clients come to a product wizard, upload a picture, define the zones of customizability, set up available options, and create their own product.

The kicker: Five hours from blank picture to online customizer. Any product, any brand.

That’s frankly amazing — I have a little personal experience with configuration engines, having built one for a custom student planner business in the late 1990s. Ours, which was extremely sophisticated for its day, took three full-time developers half a year to create … and a full-time developer to maintain and enhance. The costs, as you can imagine, were significant.

MyCustomizer, whose primary competition is one-off projects like the one I led, charges from $99/month with a small per-sale commission to $10,000/month with no commission. Particularly at the low end, that’s extremely cheap. As in, nonexistently cheap.

“Our bet is that MyCustomizer will help our clients sell more,” Painchaud said, “and help them understand that mass customization is a better business model.”

The company is graduating from FounderFuel today and will be launching at MIT Sloan’s Smart Customization Seminar in early December. But it’s already almost profitable due to existing contracts, Painchaud told me.

MyCustomizer has taken $25,000 in accelerator financing from FounderFuel, some investment funding from the Canadian government, and will be taking advantage of a Business Development Bank of Canada’s offer of a $150,000 convertible loan.