It’s official: MySpace, seeking to defend its status as the leading social network, will open up its platform to third-party developers over the next couple of months.

Like rival Facebook’s move six months ago, MySpace’s move will let developers build applications within MySpace and make money from them.

The full significance of this move — and of social networking platforms in general — is hard to tell. Despite the hype generated lately about the Facebook platform, few of the 6,000 or so applications are remarkable or particularly innovative. On the other hand, the applications are drawing traffic: Facebook’s platform applications see 14 million unique visitors a month, with 88 million visits for an average visit time of 4:30 minutes, according to Compete. We’ve heard estimates that the applications account for anywhere between two and 20 percent of Facebook’s overall traffic, something we’ve been trying to confirm.

MySpace, which still leads Facebook in overall users by a wide margin, was expected to make the move to embrace developers — as a way to ensure its leadership position.

RockYou and Slide, the leading widget providers on MySpace and application leaders on Facebook, both said that they have been waiting hungrily to push applications across MySpace and all the other social networks that plan to offer developer platforms — such as Hi5, Bebo and Tagged.

Even though Facebook’s open-platform move instigated the development of these rival platforms, Facebook’s has been a technical work in progress, with glitches still being regularly reported by developers.

News Corp.’s MySpace is opting for a slower approach, hoping to avoid some of the same problems.

In the next couple of weeks, the company says, it will release a directory of widgets already on its site.

Then, within the next couple of months, it will launch a platform that gives developers deeper access to MySpace data. Like Facebook, MySpace will offer application programming interfaces to its user data, so developers can build applications that run within MySpace. It will offer its own markup language for designing application user interfaces, and will let developers include Flash, Javascript and iFrames elements — also similar to what Facebook already offers. MySpace users will be able to share their profile information, activity on the site, lists of friends, and other personal data with developers’ third-party applications.

Asked by an audience member if MySpace planned to be more open than Facebook, DeWolfe smiled and said, “yes.”

It will initially offer third-party applications to only a subset of around two million MySpace users.

Next up: Google, which on Nov. 5 is expected to do something similar, starting with its social network, Orkut. 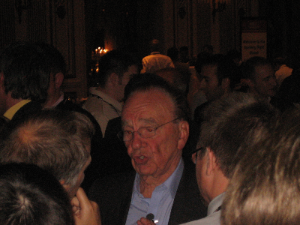 Separately, News Corp. CEO Rupert Murdoch confirmed that MySpace co-founders DeWolfe and Anderson have signed a contract to work for MySpace for two years. There’s been speculation the pair are making $30 million over that time.
Asked by interviewer John Battelle what he thought of Silicon Valley culture, Murdoch responded: “In many ways it’s the most exciting place on earth, the center of innovation.”
In response to the rumors that Facebook is possibly raising money at up to a $15 billion valuation from Microsoft, Murdoch said it would mean Newscorp is “totally underpriced.” Facebook is known to be making much money, with reports putting revenue at $150 million this year, mostly from a sweet revenue deal with Microsoft. Newscorp has a $70 billion market value and will make $5 billion if the economy holds up, Murdoch said. More coverage here.
[Mark Coker, who covered the Murdoch talk at the Web 2.0 Summit, contributed to this report.]