Moving high-definition video from one room to another takes a lot of network capacity. That’s why a bunch of electronics companies have put a lot of work into figuring out how to use our home’s cable TV wiring to transfer data at high speeds from one device to another.

The group — the Multimedia over Coax Alliance — is announced its 2.0 specification today that it is doubling the data transfer speeds. The concept was dreamed up in 2004, and the first version launched in 2008 with the ability to transfer data at 175 megabits a second. The MoCA 2.0 technology can transfer data in two modes: a basic version that transfers data at 400 megabits a second and an advanced version that transfers data at 800 megabits per second.

“This came together over the last year after thousands of hours of work,” said Rob Gelphman, chairman of the marketing work group of MoCA. “One thing we know is that the more broadband we give to consumers, the more they use it.”

Now chip makers have to create chips that use the specification, and the group has to start certifying equipment that uses the chips. It could be a year before faster networking equipment gets deployed in consumers’ homes. The whole point is to extend the ability to transfer HD video from one part of the home to another. There are scores of member companies supporting the technology, from cable TV providers to TV makers such as Panasonic to switch makers such as NetGear. 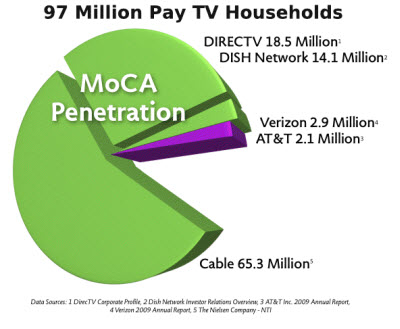 More than 35 million MoCA devices have been shipped since 2008. Verizon is one of the main providers as it ramps up its FiOS TV service in homes. Verizon is implementing MoCA for its high-speed fiber service because users want to take the fast fiber connection and use MoCA to spread it through their homes. The same goes for other big providers such as Time Warner Cable, Cox Communications, and Bright House Networks. All have committed to using MoCA networks. Full told, MoCA could theoretically be used in more than 97 million homes in the U.S. that have cable wiring, satellite TV, FiOS, or AT&T’s internet protocol TV.

The 2.0 specification is more power efficient because it has a power-down mode and a sleep mode for when it isn’t being used much.

Rivals include HomePlug AV, which transfers data via the electrical wires in a home. There are also wireless technologies from Wi-Fi to Wireless HD that are vying to transfer data. Gelphman says that cable wiring can reach longer distances through a home, whereas the wireless data has limitations in that respect.