New Relic, a startup that helps you manage applications built with the Ruby on Rails framework, has raised $3.5 million in a first round of funding.

Both Ruby on Rails and computing in the Internet “cloud” have been heating up recently. In fact, this is just the latest in a series of investments in this field from Benchmark Capital, one of Silicon Valley’s leading venture firms. (Benchmark invested in Engine Yard back in January, and announced it was backing RightScale just last week.)

That’s no accident, says Benchmark general partner Peter Fenton, who’s joining New Relic’s board. Fenton describes cloud computing and Ruby on Rails as the two most important and transformative recent developments in software. The movement to the cloud is changing how software is distributed and what it can do, while Ruby on Rails is making it faster and easier for developers to build applications.

New Relic’s founder Lewis Cirne already has some experience with application performance management — in 1998, he founded Wily Technology, a company that provided a similar service for Java apps. Wily eventually grew to $100 million in annual revenue and was acquired by CA, Inc. in 2006.

Menlo Park, Calif.-based New Relic’s offering works as a Rails plugin and is supposed to provide an easy interface for developers to detect, diagnose and fix problems with their apps (see screenshot below). It’s still in private testing mode; Cirne says the company has already signed up 50 customers. (Since it’s still in testing, they’re not paying any fees yet.) The service should become available to the general public in 60 days or so. 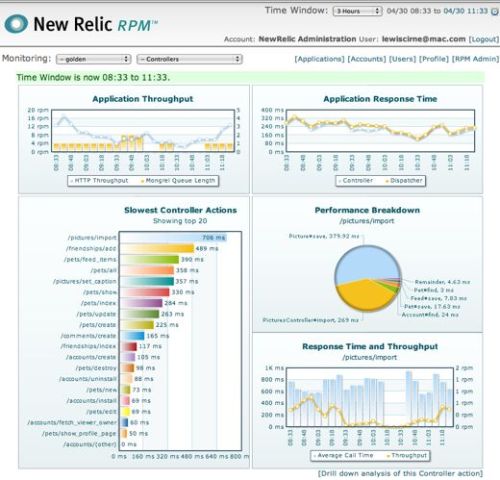 Fenton and Cirne both say that New Relic complements Benchmark’s past investments, particularly Ruby on Rails company Engine Yard — Engine Yard helps with hosting and deployment, while New Relic finds problems in the application code itself.

There’s a personal connection behind the deal, too. Not only was Cirne an entrepreneur in residence at Benchmark, but his previous company Wily was actually Fenton’s very first investment as a brand new, 27-year-old venture capitalist.