Microsoft released a new Windows 10 preview for PCs today. The build includes improvements to Start and Continuum, renames Project Spartan to Microsoft Edge, and changes how default apps are handled.

First up, File Explorer and Settings have been moved to the bottom left of Start next to Power and All Apps “for better symmetry.” The ability to toggle between the Start menu and Start screen has been moved to the new Start settings page under Personalization settings (Microsoft decided it wasn’t used frequently enough to warrant being present all the time). Removing it also let the team further reduce Start’s top chrome.

Continuum is a Windows 10 feature that handles transitions between interface modes. Microsoft has made two changes in today’s build: When you switch to Tablet mode the left-hand pane is now collapsed and can be brought back out by clicking the icon at the top left, and Start has gained larger tiles.

As for Microsoft Edge, it has finally shown up to replace Project Spartan. While Microsoft announced the new name at its Build conference last month, it’s only showing up in the Windows 10 preview for PCs now.

Also shown off at Build was Edge’s new tab page, which is available in today’s build as well. The page (which can be “lightly customized” in Settings) features a revamped layout, including top sites, featured apps, and content from MSN.

Microsoft emphasizes that the New Tab Page has not been finalized. The company is still testing “several different versions” to see what users prefer. It’s been set as the current default homepage “to get as much data and feedback as possible.”

Other new Edge features include InPrivate mode, the ability to pin websites to Start, history view, a new animated Reading View icon, and an audio indicator on tabs that have web pages making sounds or playing music (just like in Google Chrome). This build also includes the latest enhancements to Edge’s Chakra JavaScript engine.

Last but not least, Microsoft has changed how Windows 10 handles default apps. In Windows 8.1, Win32 applications (those not in the Windows Store) could invoke a prompt asking the user to change their default settings. Windows Store apps could not do this, and instead a “new apps are available” notification banner appeared after installation, and clicking on it would let the user change their default settings. 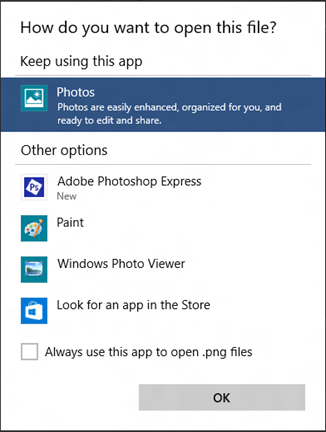 Now in Windows 10, no apps are allowed to invoke these prompts. Only Windows can, as Microsoft explains:

For example — if you install a new photo editor and go into File Explorer and double-click to open a JPG file — Windows will show you a prompt to change your default to the new app. So the prompt is shown in context when it matters, not randomly during setup or when an app is launched.

That said, Win32 apps might still end up showing this new dialog box:

This message was added for compatibility reasons (in places where Win32 apps previously asked you to change your defaults). Microsoft hopes that over time users will see this dialog less and less “as apps are updated to align with the new Windows 10 model for defaults.”

Other improvements in this build include:

Today’s update bumps the Windows 10 build number from 10074, released on April 29, to build 10122. The update should arrive overnight for Windows 10 preview users via Windows Update (your PC has to be plugged in, and be on or sleeping). If you want to get build 10122 now, head to PC Settings, select “Update and recovery,” then “Preview builds,” and click the “Check Now” button.