In the months leading up to the presidential election, online forums are already saturated with fiery political discussion and debate.

Politix, a spin-off of profitable community news site Topix, aims to be the place for all you political news junkies to make a stand. Today, Politix has appointed a editorial lead from political news site Politico. New hire, David Mark, promises to bring an objective voice to a site that primarily consists of polls and discussion threads.

Mark previously ran Politico’s popular Arena section. On Arena, readers can offer their take on the news, overseen by moderators. There is strong overlap with Politix, where hundreds of people are voting and commenting on campaign topics like: “Which of the Presidential candidates is more qualified to create jobs?” (The answer? Mitt Romney by a slim margin, if you’re interested.)

This is an impressive hire for the startup in light of Mark’s traditional reporting background. Prior to Politico, he was the editor-in-chief of Campaigns & Elections Magazine; he also covered Capitol Hill for the Associated Press. 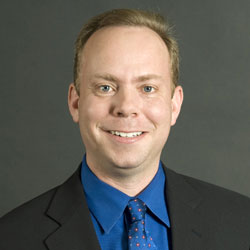 Mark told VentureBeat that he joined the Palo Alto-based company as he has long been interested in the convergence of technology and politics.

“With the news business changing rapidly, readers are looking for new ways to get political information and share their own views,” said Mark. “Rather than wading through dry analyses of congressional bills, many folks form their ideas by reading postings from others — and then offering their own take,” he added.

According to founder and chief executive Chris Tolles, Politix won’t be a hub for breaking political news, as most of the content will be aggregated from elsewhere. For this reason, Tolles does not compete with publications like Politico. Tolles said he primarily competes for ad dollars with hyper-local and community news sites like Examiner and AOL-owned Patch.

Tolles said Topix has not taken any investment since 2006 and makes the bulk of its money through advertising. The shift to political content is a shrewd one — there are new revenue opportunities from election advertising. This year, CBS expects $2 billion will be spent on political ads.

In 2011, Tolles decided to created the separate site for campaign-related debate — Politix — when political polls on the Topix home page generated a sharp spike in traffic. The polls received 200,000 votes and 100,000 comments from users. Read the full story on VentureBeat.

“From there, we gave our readers forums to create their own stories. We took some of the most interesting commentary and built Politix around having a moderated and engaged discussion with some journalism in the mix,” Tolles told VentureBeat.