The world’s third-most widely used server technology powers the top social site on the planet, a billion hours of streaming video a month, the busiest blog site on the globe, and top content delivery networks like Cloudflare, but no one outside the web development community knows its name.

VentureBeat recently talked to Nginx co-founder Andre Alexeev about the company’s high-performance server software that is now powering over 25 percent of the world’s top websites.

“We’re like the man behind the curtain,” Alexeev says. “We power over 70 million sites overall — about 12 percent of the Internet, but still a lot of people have not heard of Nginx.”

Nginx, pronounced en-gin-ex,was recently chosen as one of the foundations of Netflix’s content delivery network, or CDN. CDNs help companies with massive data distribution needs serve clients all over the globe quickly and efficiently. Most companies choose a commercially available CDN, but at some size, it becomes more economical to build your own. That’s exactly what Netflix did — essentially following the YouTube model.

Serving content for Netflix is, obviously, not small potatoes. In June the company said it was serving nearly a billion hours of video each and every month. That translates into huge amounts of data, in some cases up to 32 percent of peak Internet bandwidth in North America alone. Not all of that is transferring immediately to Netflix’s own CDN; the company is taking a measured approach to the project. But the cost savings mean that it is the company’s preferred direction.

That’s just a fraction of what Nginx is doing.

The server technology powers the websites of some of the most well-known brands online. Think the busiest site on the planet: Facebook. And WordPress. Not to mention Hulu, Zappos, Zynga, Dropbox, and Yandex, the big Russian search engine. Why are all these giants of the web using Nginx?

“We’ve built Nginx to be much more efficient, much more scalable,” Aleexev told VentureBeat. “We’ve designed it to extract the most performance from hardware — it’s built to scale from 1,000 concurrent connections per server to 1,000,000 per server.”

The company is very young, exactly a year old today. But the Nginx open source software project has its roots in 2002. The server software was first released in 2004, and the core team has been iterating ever since. Nginx, the company, plans to make money the way many companies built around open source software do: consulting, services, implementation, strategy. And that’s pretty much what they did for Netflix.

“We helped them with the proof of concept and helped optimize the operating system they are using, which is FreeBSD,” Aleexev says. “We also optimized Nginx for the hardware.”

But Nginx also plans to offer commercial products, including extensions to the server software and a new product in the web acceleration space. To accomplish this, the company raised $3 million in venture capital last year from BV Capital, Runa Capital, and MSD. There’s still a long way to go to catch market leader Apache, currently running 64 percent of the world’s top servers. But Nginx’s focus is not just the most sites: it’s the busiest sites. 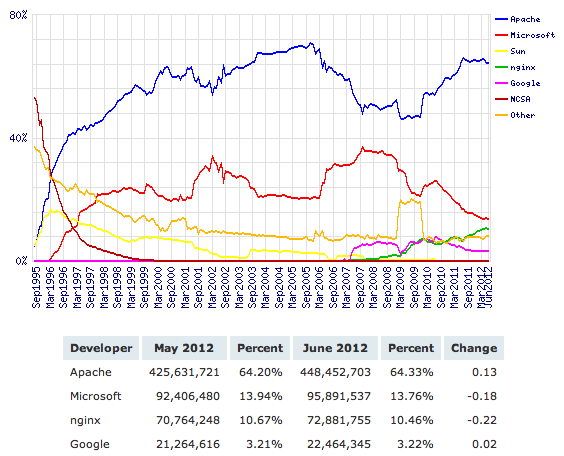 Above: Server market share as of June – green line is Nginx