In the 25 years since it launched, Photoshop has irreversibly altered the trajectory of modern design and photography. And unlike most apps its age, Photoshop’s best days could be ahead of it — at least, that’s what Adobe tells us.

For the occasion, we talked shop with longtime Adobe project manager Stephen Nielson to learn more about Photoshop’s legacy, its impact on society (the good and bad), and some upcoming features. Please note that we’ve trimmed it a bit for clarity.

VentureBeat: In 25 years, Photoshop has changed a lot. But in some ways it hasn’t. What does that say about the tool?

Stephen Nielson: The tool has certainly evolved in the 25 years, but it’s very recognizable, like you said. Version one had magic wand, the clone stamp tool — a lot of very familiar tools that people still use today. We’ve had some pretty significant, game-changing things come after that. Layers didn’t exist in version one. Working more with different types of color spaces, and working with text, and vector shapes — there are a lot of improvements that have been made over the years.

VB: Over time, lots of features have been packed into Photoshop. Is the next step to focus on outside stuff that augments the app?

SN: Our focus, moving forward, I would say is two-fold. We’re always building new capabilities that didn’t exist, but I think we’re more focused on how to make people more productive. How do we make things — I don’t want to say easier — how do we make them more efficient? I mean, you could build the same thing in CS 5 that you could build with CC, but I think with the combination of Libraries, you can build it orders of magnitude faster and better.

The second piece that you kind of touched on — we do have a lot of tools inside Photoshop. It’s a strength and a weakness, you know? People love Photoshop, because they can do anything. But at the same time, there’s a lot of times where you’re like “I only need a couple of these tools to get the job done” and the other tools are “getting in the way” — they’re not actually getting in the way, but there’s a lot of cognitive tax on having a lot of other things there. It can be cumbersome. 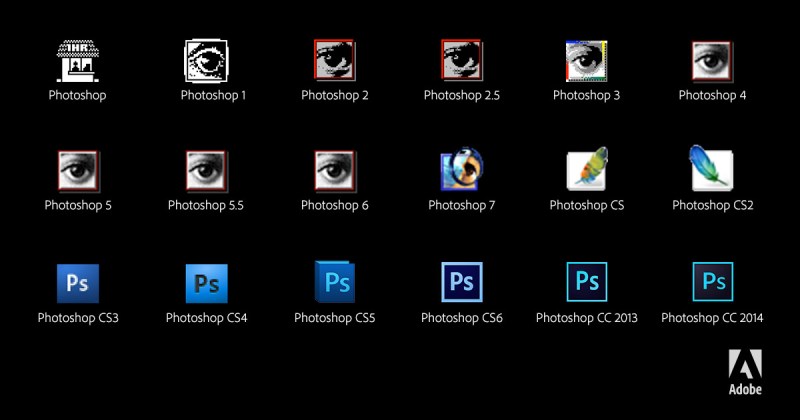 Above: Photoshop icons through the years.

VB: Can you talk more broadly about the impact Photoshop has had on the design community? Even though that’s sort of a loaded question.

SN: Photoshop has had just an enormous impact on design, and photography as well. A lot of people like to point out that it’s called “Photoshop,” but I’ve always thought of Photoshop as not being just about the photo. Photoshop has always been about design in my mind, whether that’s the design of a photo or a graphic design, web design, etc…

And in the eyes of the general public as well, we still hear talk about people “Photoshopping” — using Photoshop as a verb. I wouldn’t condone that, or at least our lawyers tell us not to, but you know it speaks to the impact that the tool has had, where the brand has become a verb, much like “hey, go Google that.” That might be the biggest evidence of the impact that the tool has had. 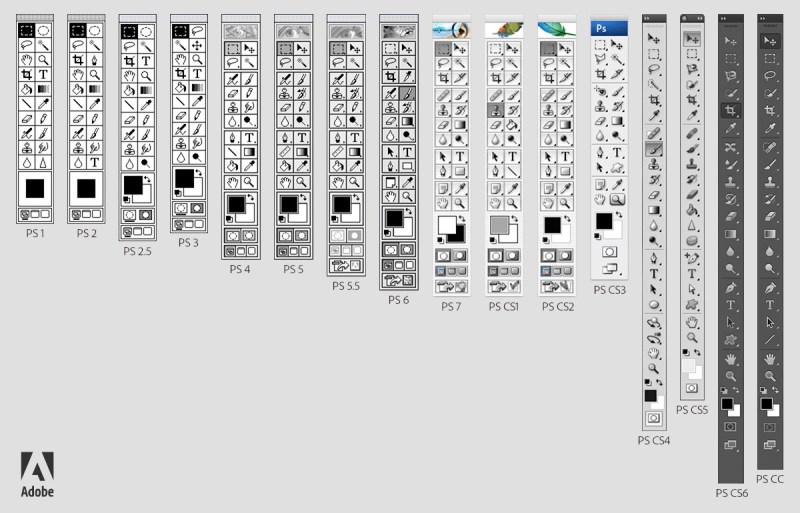 Above: Photoshop toolbars through the years.

VB: But sometimes saying something was “shopped” doesn’t have the best connotation.

SN: Yeah, I mean, the tool is amoral. It’s not good or bad. It can be used for good or bad — or, you know, depending on your definition of good and bad. I think there has been a lot of discussion recently, especially in the fashion industry, around “Photoshopping,” and the connotation for a lot of people is manipulating body images. That’s certainly not something that we condone or promote.

But, like you’ve said, the tool can be used for good or bad. The tool is used in overwhelmingly more good scenarios than damaging scenarios. We’ve got lots of stories of Photoshop making significant impact in medicine … We’ve literally had stories of people using Photoshop to solve crimes. 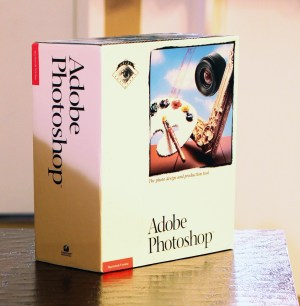 Above: The box for the very first version of Photoshop.

VB: For a while every year there was this push to get excited about Photoshop. Creative Cloud sort of changed things. There’s now a different kind of push. Do you feel Creative Cloud prevents feature bloat?

SN: Absolutely. I think the transition away from boxed software to a cloud subscription software has been painful for some people. We’re starting to see more and more people — as you can tell by our numbers — beginning to recognize the value of Creative Cloud. And to be honest, I feel like it’s taken us a while to demonstrate that value.

Moving to a subscription fundamentally changes how we think about the development of new features in a very positive way. I mean, no doubt the subscription model has been better for Adobe, but I think it’s been better for customers as well. For a number of reasons, one, it’s actually way cheaper.

The focus has shifted, and allowed us to shift towards making improvements that people will actually use a lot. By far, we’ve had more discussion about “What are people going to actually use?” rather than “What’s gonna look the best?” or “What would be the easiest thing to advertise?” And I’m not saying we’ve prioritized those things in the past, but I think it has shifted the conversation internally to “What’s the right thing to do for our customers?”

VB: Can we talk more specifically about what’s next? It’s been 25 years and, especially in the Internet age, that’s just old.

SN: Like you said, the app is 25 years old, which in the tech industry is just unheard of. You would think Photoshop’s best days are behind it. But I don’t think that’s the case at all. I think we have an amazing set of opportunities in front of us. And I would break it into maybe three categories.

The first one is: Photoshop and Creative Cloud are going to fundamentally change the way people work together on creative content — Creative Cloud Libraries being one of those, the mobile app workflows being another. I believe that we’re headed towards dramatic changes in how you work together with other people.

The second trend, or opportunity, is this idea of specialization. Where we have built this technology — this Project Recess — to enable us to rapidly build different experiences … Photoshop can do anything, it’s just a question of “Is the experience optimized for different segments?” And that’s exactly what we’re investing in.

And the third category is, much like we always have, we continue to — I think — innovate faster than everyone on totally new capabilities. Part of that huge opportunity is 3D. I believe we’re going to see more cameras with depth sensors, which will give us an additional input into editing an image. When you know the depth of an image, you can manipulate it in totally new ways.

And with all of these things, we’ll have announcements to make later. I think that Photoshop’s best days are actually ahead of it. We have huge opportunities ahead of us to do even more amazing things than we’ve done in the past, and have even more impact on the world.