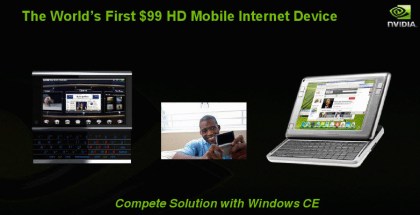 Nvidia is announcing today that it wants to enable $99 mobile internet devices that can play high-definition graphics.

The so-called MIDs are smaller than laptop computers but less functional. Their primary purpose is to display web pages on a screen that ranges from four to 12 inches. The way Nvidia envisions them, they’ll run either Google’s Android or Microsoft’s Windows CE operating systems. They’ll also use Nvidia’s Tegra chips, which combine mobile phone and computing capabilities on a power-efficient chip.

Michael Rayfield, general manager of Nvidia’s mobile business unit, said designs are underway with partners but he can’t talk about them yet. 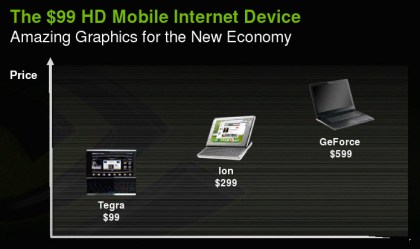 Rayfield said these devices would be capable of playing HD movies and would always be connected to the internet. They are similar to the MIDs that Intel is creating using its Atom microprocessor, but Rayfield said these devices would likely have 10 times the battery life, amounting to days of usage on a single charge and would cost as little as $99 unsubsidized. The Tegra-based MIDs would be connected to Wi-Fi and 3G wireless networks.

The devices could be used to make calls that tap broadband networks, such as Skype calls, but Rayfield said the primary use is not likely to be phone calls, since that would require Windows Mobile as an operating system, not Windows CE. Nvidia has partnered with Microsoft, ST-Ericsson, as well as the Open Handset Alliance built around Google’s Android platform.

Rayfield said the first MIDs using the platform could debut as early as this summer. Nvidia is showing off the platform this week at the Mobile World Congress in Barcelona. It will demo a new Nvidia Tegra APX 2600 processor running Google’s Android software.

The $99 MID is a low part of the product spectrum for Nvidia. It’s targeting its Ion platform, which uses an Intel Atom processor alongside Nvidia graphics, at a $299 device, and it’s targeting its GeForce graphics chips at laptops costing $599 or more.