Ohloh, a company that ranks the nation’s top open source coders, is opening its service to let other developers to track and rank their own teams.

It’s the latest move by Ohloh, a Bellevue, WA company that already distributes its coder profiles and related data to about 5,000 open source sites. The Ohloh profiles can serve as advertising for these sites, because the profiles show how active their open source development projects are.

Here’s how it works. Ohloh ranks individual coders by tracking their activity. Ohloh can do this because open source projects publish their code, along with a record of updates each coder makes. Ohloh exploits this publicly available information and analyzes which coders are the most active in making key contributions to the most important open source projects. It assigns them a “KudoRank” to each coder between 1 (poor) through 10 (best). 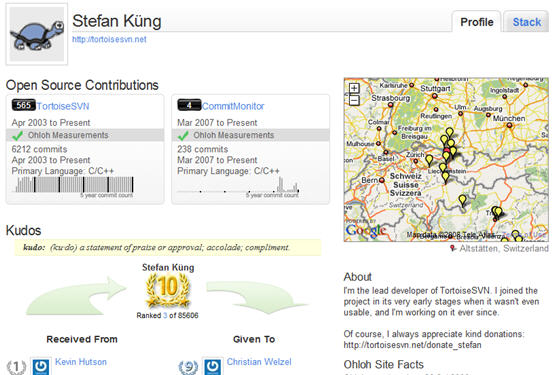 See the profile above for example. It is the profile for Stefan Küng, who runs a popular project called TortoiseSVN, and who has a KudoRank of 10. It includes his name, the projects he’s working on, where he lives and other key stats. There’s a map showing the location of technical people living near him.

Below shows you the small widget embedded on Küng’s project site, taken from Ohloh data. Once at the site, you can click on the widget, and Ohloh gives you much more data about his project. 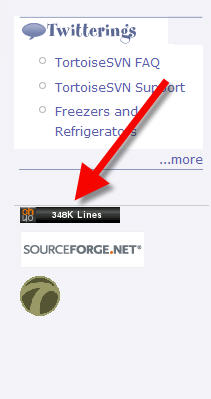 In open sourcing its site tonight (Monday), Ohloh will let other developers use the technology to track their own open source team of coders, to watch which individuals are performing well, but also to perform more general audits of their software. Specifically, Ohloh will release Ohcount, a command line tool and library that counts lines of source code and analyzes the language of the source code. Ohcount count lines of code contributed by a developer. It supports 35 languages, including C/C++, C#, Java, Javascript, Ruby, HTML and XML. Ohcount and subsequent outsourcing by Ohloh is licensed under GNU General Public License version 2.

Ohloh has seed backing from investors Paul Maritz, Larry Augustin and Jeff Clavier, and will likely announce a first round of venture capital in the early part of the second quarter, chief executive Scott Collison tells VentureBeat.

Ohloh also encourages coders to provide feedback, for example informing Ohloh when they may be working on two different projects under different aliases. That way, Ohloh can rate them as one person, and rank them accurately against 70,000 other individuals in its database.

More info on Ohloh and its business below: