Oracle made a lot of noise and published no fewer than 17 press releases this week during its OpenWorld developer conference in San Francisco. But not all of the news is equally important. Judging by how much time Larry Ellison spent talking about it, the company’s new second-generation cloud infrastructure is the top priority.

Ultimately, the company is optimistic about its prospects in public cloud, even though the market is 10 years old.

“In terms of actual deployments, we’re barely out of the first inning,” Robert Shimp, Oracle’s vice president of technology marketing, told VentureBeat in an interview recently at company headquarters in Redwood Shores, California.

But there are questions: Will many enterprises and startups test out — and then stick with — Oracle’s cloud infrastructure as a service (IaaS)? Will Oracle spend the money necessary to fund worldwide data center infrastructure expansion? Does Oracle have the team in place to frequently release and update services in order to stay competitive? Will Oracle just end up throwing in the towel with its commodity public cloud, as HP did not very long ago? Will Oracle be able to resolve basic problems with the experience of setting up new computing resources to more closely resemble larger public clouds?

What’s certain is that people will be spending more, not less, on the public cloud in the next few years. In 2020, 30.2 percent of all IT spending will be on public cloud, up from 18.9 percent last year, IDC said in April. A 451 Research survey found that six percent of enterprise workloads are running on public clouds. If Oracle can hang in there, it will see revenue growth.

But there’s no guarantee that Oracle will increase its market share as it competes with Amazon Web Services (AWS), Microsoft Azure, and Google Cloud Platform (GCP). And it probably doesn’t help that in 2009, Ellison called the cloud “water vapor.”

Still, executives are bullish. They think they can be more successful than Dell, HP, Rackspace, and VMware here. 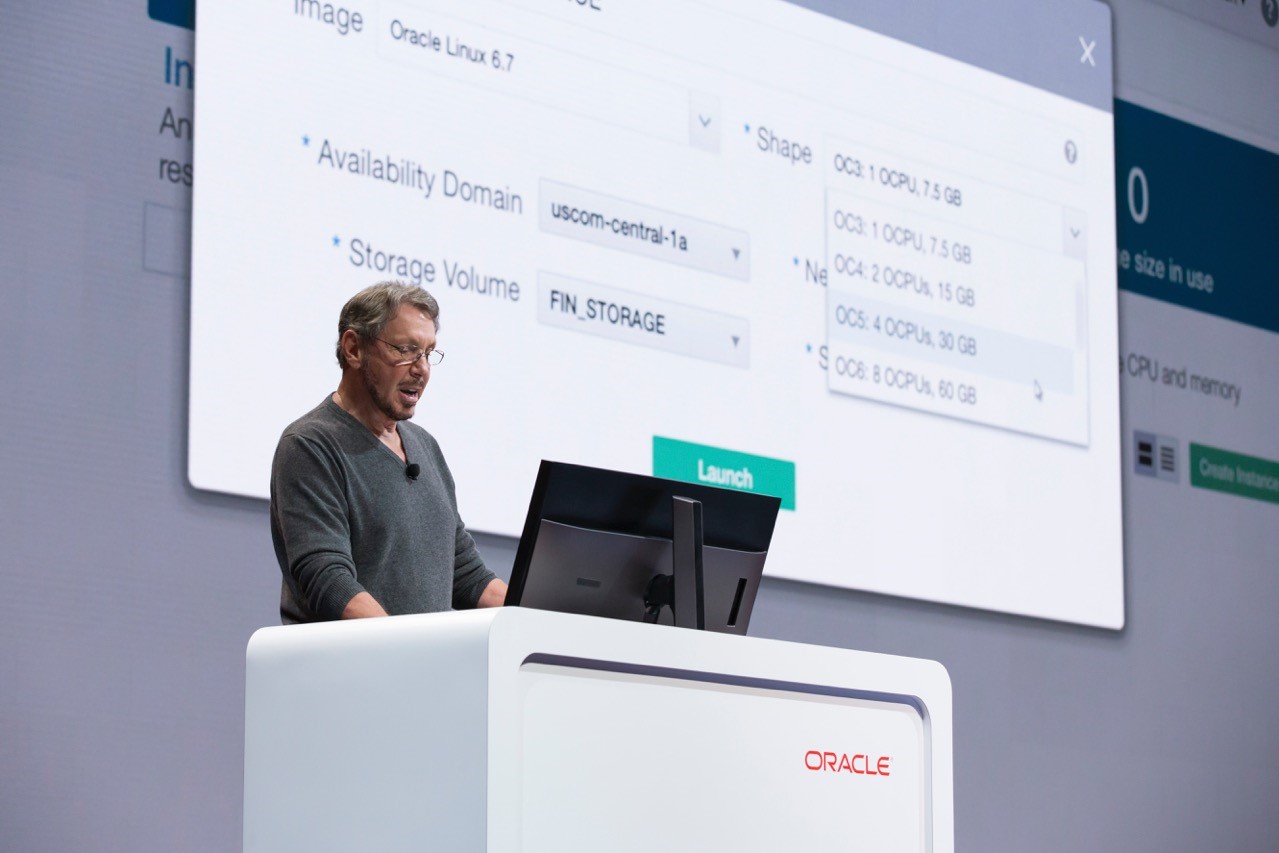 “We’ve taken a very different approach,” Don Johnson, an Oracle vice president of engineering, told VentureBeat at OpenWorld. “We have fundamental investment and ownership of our software stack. “We haven’t cobbled together a collection of various pieces and tried to stand it up as public cloud.”

In a talk at the conference about the new cloud infrastructure, Johnson, who previously spent seven years as an engineer at AWS, told a packed room that there would be “quarterly, monthly, weekly, almost daily releases.” That’s bold, but it’s the way things work at AWS. It’s very different from the cadence of releases of Oracle database software.

Johnson told me the ability to ship faster has to do with the fact that people have come to the Oracle cloud organization from web companies like Amazon, Dropbox, Facebook, Google, and Pinterest, and they’ve sought to put in place the types of tools they’ve used before to rapidly send out updates and to monitor, manage, and automate. “The thing that gives me confidence is really the people,” Johnson said, adding that building the new Oracle cloud infrastructure has been “the most successful and the most fantastic engineering effort that I’ve been a part of.” He wouldn’t talk about the exact size of the company’s geographically dispersed cloud organization, but, in 2014, Oracle said it was looking to hire more than 100 engineers to work at a cloud engineering center in downtown Seattle.

Johnson said that the Oracle cloud would provide a wider variety of operating systems for customers to choose from. (When I tested it earlier this year, it had Oracle Linux and Oracle Solaris, but no Windows, no Ubuntu, no CentOS, no CoreOS.) And he said virtual machines (VMs) would start up faster. (In those same tests, I had found that an Oracle VM took 3 minutes and 30 seconds, compared with just 30 seconds on AWS.) It will be possible for people to manage Oracle cloud infrastructure with more orchestration tools — presumably such as Puppet, Chef, and Ansible — in the future too, he said.

And it matters that Oracle has hundreds of thousands of customers, plenty of whom have been making the shift to Oracle’s cloud software anyway. “I don’t think we’re out there saying, ‘Hey, you want some compute?’ Who’s having that conversation, to be honest?” said Steve Daheb, senior vice president of Oracle cloud. Oracle is interested in moving companies’ existing applications into its cloud. “We’re going in and having those conversations,” he said. 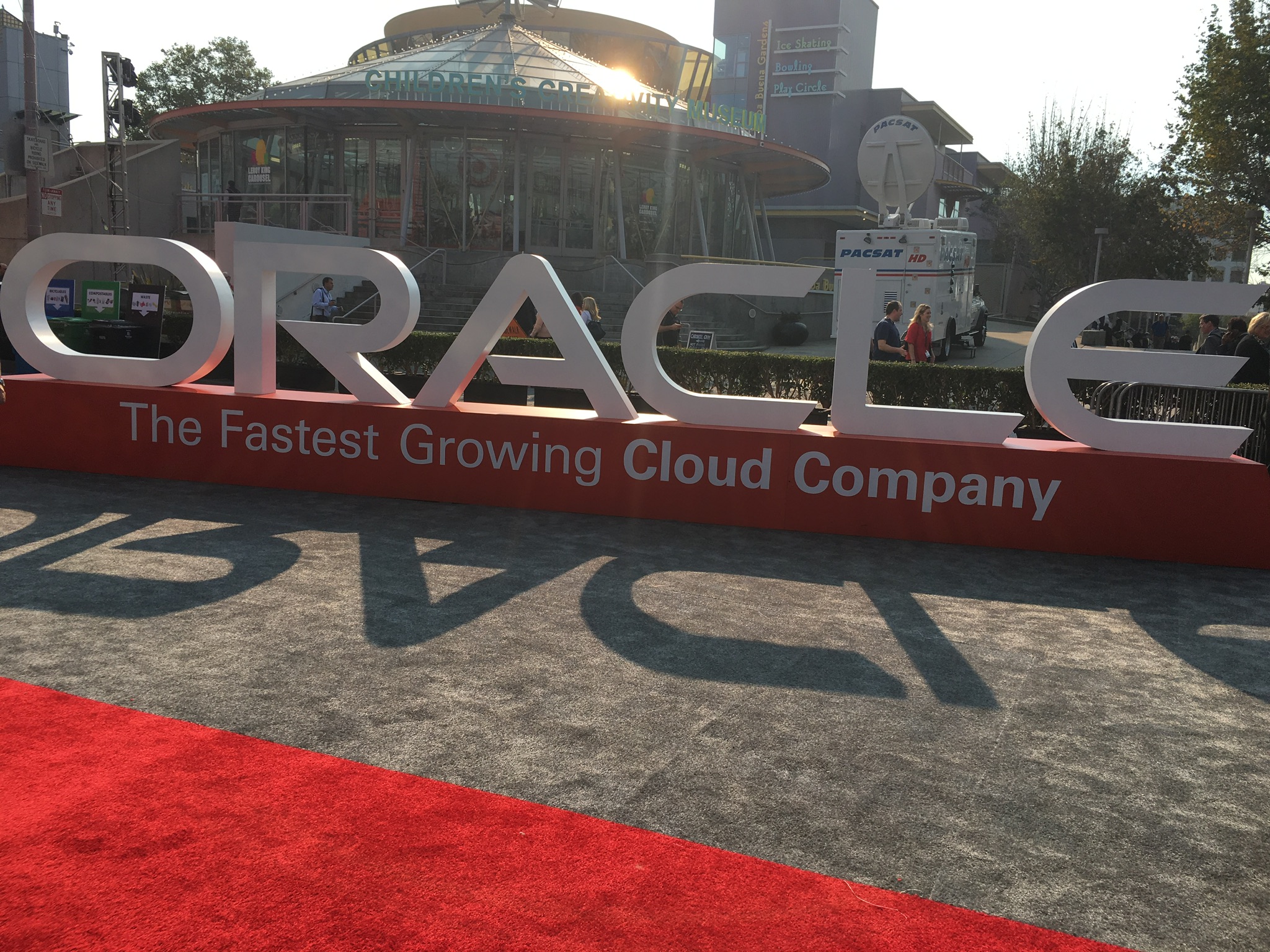 Above: At 2016 Oracle OpenWorld in San Francisco.

Johnson pointed to Oracle’s vast financial resources as one of Oracle’s other strengths. And that’s warranted. In the quarter that ended on August 31, Oracle brought in $1.83 billion in net income on $8.59 billion in revenue. Income adds up.

“I think right now, we have about $70 billion of cash … to put out there,” Oracle co-chief executive Mark Hurd told reporters in a press conference following the OpenWorld keynote on Monday. It’s just a matter of how much money Oracle is willing to spend to further build out the necessary data center infrastructure, leaving aside other costs. Hurd shied away from committing to a dollar figure. But he did provide a general model about how infrastructure spending will work.

At first, he said, the company spent money to put in place the data center gear that’s necessary to run software as a service (SaaS) for its customers. Then came spending for the equipment necessary to provide platform as a service (PaaS) to customers. “You’ll see more investments into infrastructure, but remember, it’s riding behind the wake of the existing SaaS and PaaS infrastructure that’s out there,” Hurd said. He suggested looking at Oracle’s expenditures for SaaS and PaaS. The company is taking “that same approach now into infrastructure,” he said.

If nothing else, the company’s most recognized leader has changed his rhetoric when it comes to the cloud. On Tuesday, Ellison spent much of his keynote talking about how his company’s cloud services outperform Amazon’s and undercut them on price. “We’re more than 100 times faster than Redshift, using half as many CPUs,” he said. Oracle duly issued a press release and published details on how it ran its benchmarks.

In a blog post encapsulating this round of Oracle cloud announcements, Gartner analyst Lydia Leong wrote that it should be seen as “a positive move for Oracle, but one with many open questions about its future.” That’s fair.

I would just add that it seems Oracle has no immediate plans to back down in cloud infrastructure. If anything, it’s just getting comfortable.