I’ve written plenty of words complaining about the shameful state of a VR market heading into 2020 in which Oculus Go is a best-seller with its limited interactions and a nearly defunct 3DoF development platform. So I’ll accept being called a hypocrite to report Panasonic’s 3DoF headset at CES 2020 is one of the most interesting VR prototypes I put in front of my eyes at the consumer electronics event this year.

Panasonic calls these “VR eyeglasses” a prototype, so consider any specifications shared in this article as placeholders for whatever could ship from the company or a partner. For example, a Panasonic representative said they could achieve a 100-degree field of view with this slim design using larger OLED microdisplays than the ones inside the headset I tried. So the smaller OLED panels in the CES prototype produced a noticeably smaller field of view than most current consumer designs — around 70 degrees measured diagonally, according to Panasonic.

Why is this interesting if Panasonic’s prototype glasses are worse than Oculus Go in a critical way? I’m not really interested in VR with a significantly smaller field of view than current designs. So my interest relates to Panasonic’s suggestion they can expand on what I saw to levels comparable with current designs. With that in mind, I found very alluring this sleek lightweight approach coupled with lush visuals. Panasonic says it uses multi-element pancake lenses with panels produced in partnership with Kopin.

The weight loss is considerable compared with current VR headset designs. Panasonic reps said they are somewhere in the range of 150 grams, which is only about a third of one pound, but that could change based on the path they take to turn this prototype into an actual consumer product. The Oculus Quest, by comparison, is about 570 grams, which is about 1.25 pounds–roughly four times as heavy.

Though I only spent a few minutes with its 60 Hz display, I twisted the inter-pupillary distance (IPD) mechanism (said to adjust from below 60 millimeters to more than 70 millimeters) near the bridge of the glasses and tuned the lenses directly in front of my eyes. Then I found myself observing crisp text and recall no impression of a screen door effect. I enjoyed a look inside a temple that seemed to live up to the promise of extremely high resolution high-dynamic range panels.

I should note that I saw some kind of “ghosting” visual artifact in a few places where there were white text subtitles or white lights. A second almost transparent image of the text or lights seemed to float at an angle nearby.

This was running from a high-powered PC but Panasonic intends for these VR glasses to operate over a USB-C connection running to a phone from the tip behind an ear. Panasonic representatives said they have “multiple” candidate designs for the addition of 6DoF tracking, though that would likely add some weight. The connected phone could obviously be used as an input device and provide content to the glasses but this is where things get sort of dicey for this approach.

What platform is this? 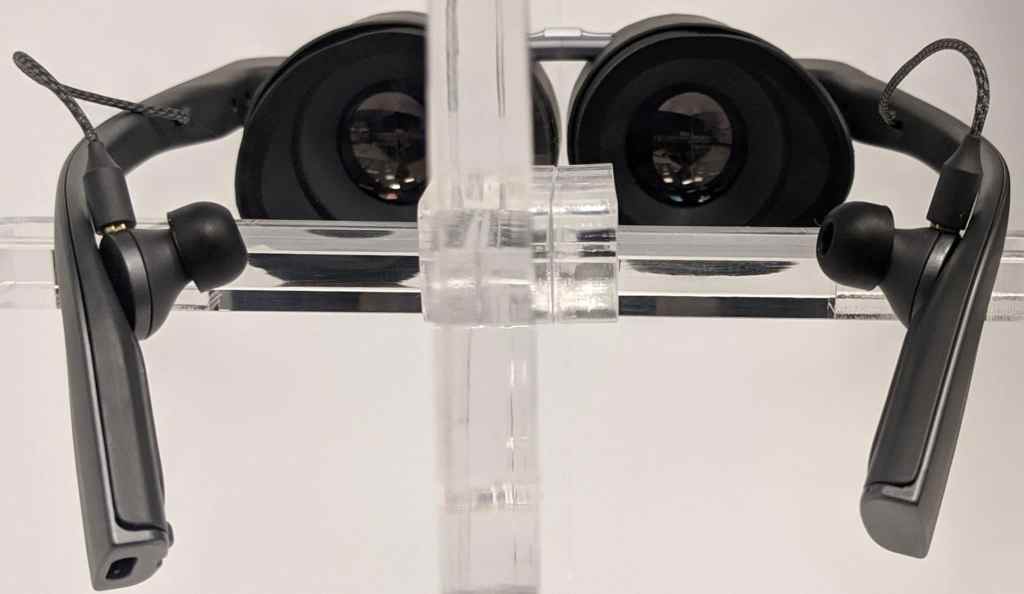 Above: Panasonic’s VR eyeglasses are intriguing.

Google and Facebook just spent the past two years receding from the phone-based VR market, with the latter devoting 2019 to its Quest standalone platform and the former abandoning Daydream. Plus, Apple doesn’t always play well with partners and Samsung develops its own display technology. So what exactly would people do with this hardware and where would that content come from? Those are great questions I’m not able to answer with this early look.

Even if these glasses added some cameras and somehow became compatible with, say, Oculus Touch controllers and Oculus Quest apps — could you really play active games like Beat Saber and keep a pair of sunglasses from flying off your head? Or if Panasonic sticks with 3DoF would these glasses reach a low enough price and have enough software and content support they could actually appeal to a decent number of people who just want a private movie viewer?

I don’t know the answers to any of those questions from my short demo, but this slim design fit well enough I hope we get to find out.