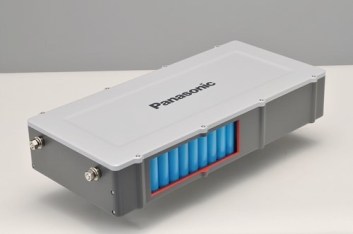 Panasonic is charging into the green space headlong — first with deals to supply batteries for electric and hybrid vehicles — and now announcing that it will launch a massive lithium-ion storage battery capable of powering an average home for up to a week, the company says.

This is significant for two reasons. First, if home batteries like this one become commonplace, renewable sources of energy like rooftop solar and residential turbines could finally take off. The biggest roadblock to their adoption is that they are intermittent; reliable storage is needed to make them effective. Second, if affordable storage is achieved on the home-level, there might be less need for grid-scale storage, which is pricier and harder to accomplish.

The announcement is hastened by Panasonic’s acquisition of a more than 50 percent stake in Sanyo, making the company a battery manufacturing powerhouse that could trounce almost everyone else in the market, including A123Systems, Johnson Controls-Saft, Valence Technologies, and others. Becoming the earliest entrant into the home storage space would solidify its dominance.

Panasonic, which says it has already thoroughly tested this technology, plans to bundle its storage device with a home energy monitoring system that would allow users to view how much power they are using and how much it is costing them right on their television displays. This could make the company a major player in the smart grid arena as well.

Depending on how successful Panasonic is at marketing its household battery (and bringing down the cost), it could become a formidable competitor for fuel-cell makers like Clear Edge Power. Fuel cells also allow for low-emission operations, converting natural gas into electricity and recycled heat. But they don’t store electricity for use later, which is a major need for alternative energies to gain traction.

Panasonic, which scored a deal to supply batteries to Tesla Motors in October, has already successfully pushed automotive battery makers out of the market, like Imara, which shuttered earlier this month. Valence, being kept afloat by a new contract with Smith Electric Vehicles, could be next if it doesn’t move fast. In any case, it will have a head start, with Panasonic’s storage system not hitting stores until 2011.