The transition highlights the fact that Intel has been struggling to compete on chip design against Advanced Micro Devices and to compete with TSMC and Samsung on chip manufacturing. In recent years, Intel has lost the competitive advantage it had on those fronts for decades.

Gelsinger’s appointment as Intel’s eighth CEO in its 52-year history could be a morale boost for the company’s engineers, who number around 70,000, as Gelsinger spent three decades at Intel as an engineer and then executive. In my opinion, it’s about time for this move, and I imagine it will be popular.

I thought that Gelsinger should have been appointed CEO many years ago. He has a keen understanding of chip design (Epic Games CEO Tim Sweeney pointed out that Gelsinger cowrote the book Programming the 80386) and has a lively personality, an ease in speaking to crowds, and an ability to communicate tough concepts in speeches and interviews.

Intel is still in good financial shape, as PC sales have been strong during the pandemic, and it will announce its fourth-quarter results on January 21 as scheduled. On that day, Intel will announce how it’s doing with its 7-nanometer manufacturing process technology (where circuits are seven billionths of a meter apart).

Intel has had delays in its 7nm process (which compares to 5nm for others due to a difference in nomenclature) during the past year or so. Before that, under previous CEO Brian Krzanich, Intel had trouble getting its 10nm process on schedule. 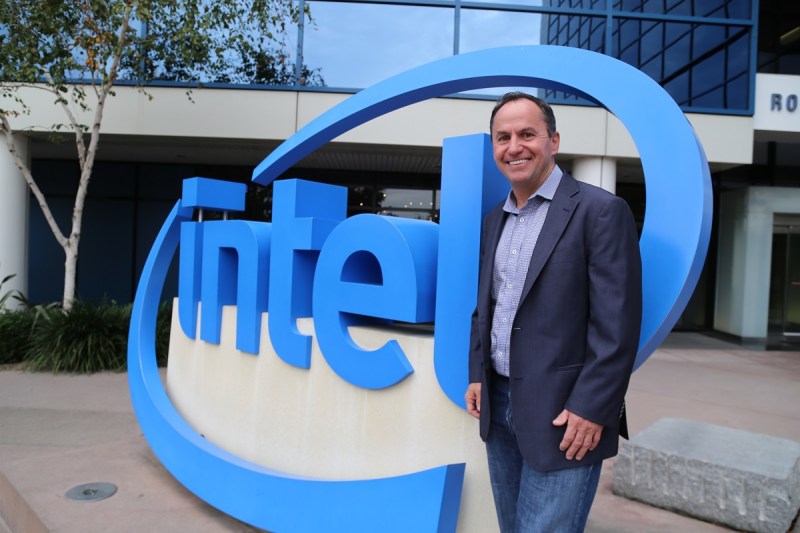 Above: Bob Swan is the 7th CEO of Intel.

Intel is the largest U.S. semiconductor company that manufactures its own chips. Most others use foundries, or contract manufacturers, such as TSMC, with factories overseas. Intel’s major manufacturing plants are in the U.S., and so its prowess in chipmaking is closely scrutinized by the U.S. government, which considers chipmaking capability to be important for national security.

But getting manufacturing in sync with chip design is critical for Intel, which has to spend billions to build and upgrade factories to be ready to churn out scores of millions of chips on time when chip designs are ready.

Despite its troubles, Intel has managed to hang on to about 78% of the market share for x86 processors, according to market research. Rival AMD has made gains for three years, doubling its market share to 22% with sales gains in the billions of dollars.

“Swan was dealt a difficult hand and 10-nanometer was already off the rails when he was appointed CEO,” Pat Moorhead, an analyst at Moor Insights & Strategy, said in a message. “I think it came down to investor pressure and impatience. Chip problems take years to address and while Swan accomplished a lot, it wasn’t enough. I am not foreseeing any major strategic changes with Gelsinger, but I do expect him to focus on the company’s engineering culture and get it back to an execution culture.”

Gelsinger’s job is to reverse the slide. Gelsinger has been working in the tech industry for 40 years. He spent 30 years at Intel, but left in 2009 to become an executive at storage firm EMC, becoming CEO of EMC-owned VMware in 2012. Dell bought EMC and became the owner of VMware in 2016.

“Pat is a proven technology leader with a distinguished track record of innovation, talent development, and deep knowledge of Intel. He will continue a values-based cultural leadership approach with a hyper-focus on operational execution,” independent chairman of the Intel board Omar Ishrak said in a statement. “After careful consideration, the board concluded that now is the right time to make this leadership change to draw on Pat’s technology and engineering expertise during this critical period of transformation at Intel.”

The process evidently began when Daniel Loeb, head of Intel investor and hedge fund Third Point, sent a letter to Ishrak about his concerns regarding Intel’s slips. In a tweet, Loeb said that Swan agreed to step down without a fight.

Swan is a class act and did the right thing for all stake holders stepping aside for Gelsinger. https://t.co/lWdi5t41um

“The board is confident that Gelsinger, with the rest of the leadership team, will ensure strong execution of Intel’s strategy to build on its product leadership and take advantage of the significant opportunities ahead as it continues to transform from a CPU to a multi-architecture XPU company,” Ishrak said.

Gelsinger reportedly turned down past attempts to recruit him to lead Intel. “Pat Gelsinger is the CEO the board wanted all along. It was Pat’s decision to turn it down in the past,” said Kevin Krewell, an analyst at Tirias Research, in a message. “I think Pat is an excellent choice — he has deep roots at Intel, but many years of executive experience as VMWare CEO. Pat is also an astute technologist, who understands the industry and the importance of software and hardware co-design. I look forward to seeing what he can do to help get Intel back on track.”

As Swan said in a Q&A session ahead of the CES 2021 tech trade show this week, Intel made significant progress during his tenure on its strategy to transform into a multi-architecture xPU company to capitalize on market shifts and extend its reach into fast-growing markets. He was appointed chief financial officer in 2016 and became CEO in 2018 after the board removed Krzanich for having an inappropriate relationship with an Intel employee.

In a statement, Swan said he was fully supportive of the board’s choice of Gelsinger. At VMware, Gelsinger focused the company on cloud infrastructure, enterprise mobility, and cybersecurity, almost tripling the company’s annual revenues.

At Intel, Gelsinger was the architect of the original 80486 processor, which helped cement Intel’s near-monopoly on the PC processor business. He became the company’s first chief technology officer and drove the creation of key industry technologies such as USB and Wi-Fi. He led 14 different microprocessor programs and played key roles in the Core and Xeon families. When Gelsinger left, it was after one of his projects went off the rails — Intel’s attempt to enter the graphics chip business.

“I am thrilled to rejoin and lead Intel forward at this important time for the company, our industry, and our nation,” Gelsinger said in a statement. “Having begun my career at Intel and learned at the feet of [former Intel leaders] Grove, Noyce, and Moore, it’s my privilege and honor to return in this leadership capacity. I have tremendous regard for the company’s rich history and powerful technologies that have created the world’s digital infrastructure. I believe Intel has significant potential to continue to reshape the future of technology and look forward to working with the incredibly talented global Intel team to accelerate innovation and create value for our customers and shareholders.”

Intel is finally making moves to launch chips for the standalone graphics chip business, where it would compete with AMD and Nvidia. Intel is also heavily investing in AI technology in competition with others.

Nathan Brookwood, an analyst at Insight 64, said Gelsinger’s return is the biggest return of a prodigal son since Steve Jobs returned to Apple in 1997. Back then Apple was teetering on the brink of financial ruin, which is certainly not the case with Intel today.

“Intel is clearly suffering from a lack of technological leadership, and Pat is well equipped to remedy that. He needs to stem the outflow of senior technology leaders from the company, and put leaders in place who can resolve the company’s manufacturing problems,” Brookwood said. “Intel used to have a well-defined process to groom future CEOs by cycling prospective managers (who often served as ‘technical advisors’ to senior managers) through different parts of the company. They departed from that tradition about 20 years ago. Gelsinger served as a TA to Andy Grove. Perhaps his return marks a return to that system, which had served the company well for its first thirty years.”

Linley Gwennap, principal analyst at the Linley Group, agreed that Gelsinger is good with both technical knowledge and operations.

“The company’s biggest problem has been executing on its plans. The 10nm fiasco is one example, but on the processor side, several products are behind schedule and Cooper Lake barely made it to market. Hopefully, Pat can figure out what is wrong and get the company back to delivering products on time,” Gwennap said in a message. “Although Pat is a consummate Intel veteran, he’s been out of the company for a decade, so he may be able to bring some fresh air into Intel’s corporate culture. Under BK, Murthy tried to change some of the culture, but he encountered a lot of resistance and ultimately left. As an inside-outside guy, Pat is better positioned to make changes while retaining the respect of the old guard.”

Tim Bajarin, an analyst at Creative Strategies, said in a post, “I have written in the past that only Gelsinger should be the next Intel CEO. He has an incredible history at Intel and should have been CEO years ago when he was passed up by Otellini. However, his time at EMC and VMware honed his leadership skills and he is even more prepared to lead Intel in these trying times for the company. Also, he will get the kind of respect and backing from Intel employees that the last two CEOs never had.”