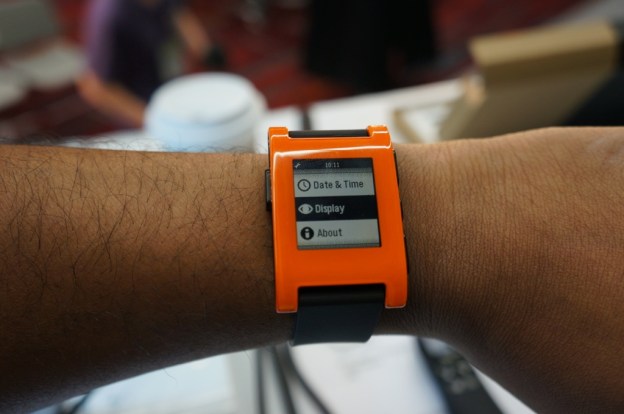 It’s been a long road for the Pebble team, despite some initial success. After raising more than $10 million on Kickstarter for its smartwatch, and then facing several months worth of delays, the Pebble finally debuted at a CES press conference this morning (the company’s very first).

Pebble’s lead engineer Eric Migicovsky (below) announced today that the watch is in mass production, and it will begin shipping to Kickstarter backers on January 23 in the order they backed the project.  The watch connects to your smartphone to show incoming data like caller info, e-mail messages calendar entries, and it can also run a variety of apps.

At peak production, Pebble will be able to make 15,000 watches a week. Pebble has to meet the demand of more than 85,000 Kickstarter orders (from almost 69,000 backers), as well as tens of thousands who’ve placed pre-orders for the $150 watch.

“To some people a smartwatch is one of those Dick Tracy devices … to us, it’s a device connected to your smartphone,” Migicovsky said. 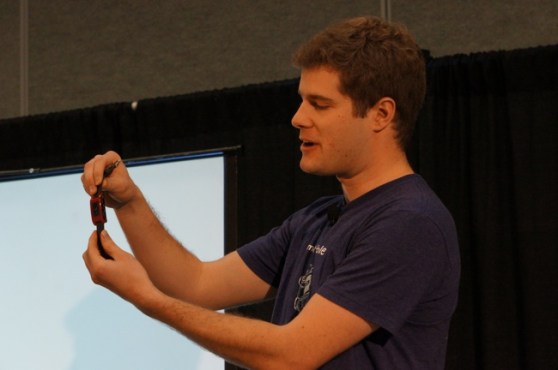 Pebble’s final design sports a black and white E-Paper display, which is an LCD variant screen. The screen refreshes faster than typical E-Ink e-reader displays and is 144 by 168 pixels. Pebble claims the watch should last up to seven days on a single charge. It’s made of a polycarbonate base and lens, with an additional antiscratch lens on the screen.

In my brief time with the Pebble, I was surprised by how light and comfortable it felt. I typically don’t like wearing watches because I find most watchbands annoying, but the Pebble’s polyurethane band felt soft and comfortable. The band is also interchangeable, if you prefer something more fashionable.

The Pebble will support Android smartphones running Android 2.3.3 and above, and Apple devices running iOS 5. Migicovsky noted that it works even better with iOS 6, thanks to a new Bluetooth profile that Apple introduced.

When I asked Migicovsky to elaborate on the Pebble’s delay from its initial September release, he said that it was mostly due to taking a completely different strategy towards production. Initially, the company planned to build 1,000 to 2,000 watches in the Bay Area, but after the Kickstarter campaign exploded in popularity, it shifted towards an overseas mass production model.

“The delay mainly stems from us shifting our focus from a sort of hacked together, simple and more rudimentary device, to what we feel and are proud of as a full-blown consumer electronics product,” he said. “That definitely took longer than we had planned for in the beginning, but we feel like the extra three-and-a-half months will definitely be worth it in the long run, based on all the future-proofing that we’ve been able to do for Pebble.”

Even though Pebble is built with geeks in mind, the company has also made it a useful sport and fitness companion. It weighs 38.2 grams, or around 1.3 ounces, so it should be light enough to wear all day. Pebble is also water resistant up to 5 atmospheres, which means you can wear it in the rain or while swimming. Since it’s waterproof, Pebble developed a magnetic charging system for the watch, which relies on a custom USB cable. 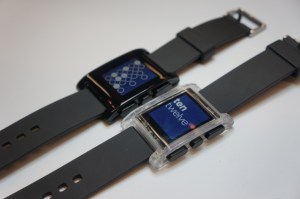 Pebble uses Bluetooth 2 at the moment to connect with smartphones, but it contains a chip that can support Bluetooth 4.0 down the line. That leaves the door open for it to connect to future smartphones and take advantage of Bluetooth 4.0’s low battery usage. Pebble also features an ambient light sensor, which will be unlocked in a future update, as well as a magnetometer and an accelerometer.

Instead of using an existing operating system like Android, Pebble runs on a custom operating system, built from the ground up. The watch relies on a free RTOS (real-time operating system) core for its notifications, and Pebble has also built a custom selection of drivers and features.

Now that the initial work on the operating system is done, Pebble is going to begin working on ways for developers to interact with the watch. Migicovsky showed off how he could program the web service IFTTT (If this then that) to send an alert to his Pebble watch when it was snowing outside. The company is also working on an SDK for developers to create their own apps and watch faces for the watch. Migicovsky invited iOS developers to contact Pebble to figure out how to connect their apps to the smartwatch.

When asked about future retail plans, Migicovsky said that the company hasn’t yet signed any deals. For now, it’s focusing on getting watches shipped to its Kickstarter backers, and selling more through its online store.