To pin or not to pin: That is not the question on Pinterest.

In fact, according to data gathered by e-commerce analytics platform RJMetrics, Pinterest retains a remarkably high percentage of new users who go on to use the site at high rates and stay active on the site long after they’ve joined.

Pinterest is the digital pin-board site that has attracted droves of arts-and-crafts enthusiasts (many of them women, but some of them rich British men) who frequently “pin” products, recipes, and fashion finds to their personalized boards. The startup has kept quiet on its fast-track to Internet fame, but, thanks to third-party analysts, we’re learning more about the reasons behind its rapid rise. 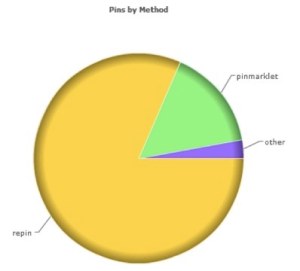 In a report published Wednesday, shared exclusively with VentureBeat, RJMetrics founder and CEO Robert Moore looks at the behaviors and activities of the startup’s members. The data show that Pinterest retains and engages users two to three times more efficiently than Twitter did at the same time in its history. What’s more, the pins represent a ide diversity of content spread across a smattering of sites. Arguably most intriguing, however, is that 80 percent of all pins are re-pins, meaning that an overwhelming majority of content shared on site is recycled between users.

“Pinterest is conducive to sharing,” Moore said in an interview with VentureBeat. “There’s a very low barrier to sharing [pins] with everyone who is following you,” Moore said of the re-pinning phenomenon.

The site, he added, is structured so that members become creators themselves by “liking” the pins of the people they follow. The end result is a powerful network effect that eclipses the retweeting activities of Twitter users. For comparison, just 1.4 percent of tweets were retweets at a similar time in Twitter’s history, according to another study.

Moore and RJMetrics also looked at the content behind pins, and the data tell a story that might be the opposite what you would expect. Instead of pins pointing predominantly to a single source, such as Etsy or Amazon, as has been theorized, pins feature a diversity of content from more than 100,000 different sources. Etsy is indeed the most popular domain and powers just over 3 percent of all pins, but the low percentage came as a shock to Moore. 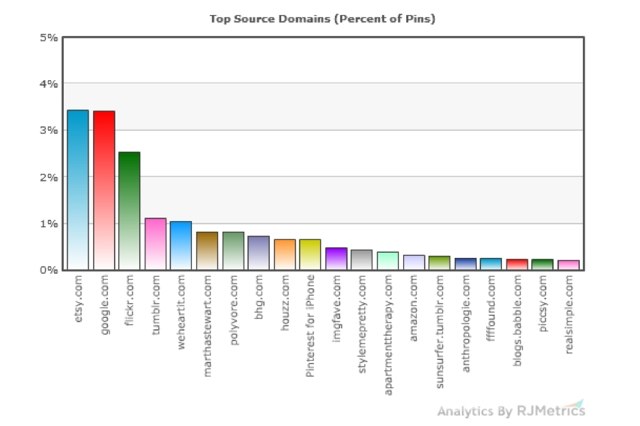 “There is a high correlation between Pinterest usage and Etsy usage, but I was expecting a much higher percentage,” Moore said. “There is an extremely long-tail effect at work here … and Pinterest is not dependent on any one platform.”

Google ranks second, accounting for around 3 percent of pins, but most Google links point to Google Image Search results, which, as the report points out, should really be attributed to third-party domains where those images originate. Flickr is the source behind 2.5 percent of pins, Tumblr represents 1.1 percent, and image gallery site weheartit.com accounts for 1 percent of pins. Amazon cracks the top 20 list, but ekes out less than half a percent.

“This either means that no one who starts using Pinterest ever stops or — more likely — that users who continue to use Pinterest become so much more engaged over time that their activities fully make up for those of any users who leave,” Moore concludes in the report.

Altogether, the findings tell the tale of a startup that is anything but a flash in a pan. “This is evidence that Pinterest can do some pretty amazing things and grow really large in size,” Moore said. “This is not a Chatroulette … once people start using it, they don’t stop.”

Pinterest, Moore added, has the potential to grow to hundreds of millions of members, and fast.

Moore speculates that the young company will implement a more lucrative system than affiliate link-swapping for cashing in on the pinning activities of its highly engaged members. He believes it could easily enable members to purchase products featured in pins directly on the Pinterest site. This, he argued, would make Pinterest a more commercially viable application than Twitter, which is much older and larger. Twitter, however, may be forced to monetize in a way that could negatively affect the user experience, such as by adding ads to the stream of tweets viewed by its users.

RJMetrics collected and analyzed nearly 1 million pins from a random sampling of Pinterest users to arrive at its conclusions. The company is confident that its sample group is representative of the larger Pinterest population.