The meet-up at Unbabel’s office on a chilly Lisbon evening looked like a million other meet-ups at startup offices around the world.

For the members of the Portuguese startup scene who had gathered, however, this November evening was exceptional thanks to the main attraction: three partners from Silicon Valley’s renowned startup machine Y Combinator. The troika was in town to speak at the mega-mega Web Summit conference. For an hour they sat under a Portuguese flag in Unbabel’s office and patiently answered questions from attendees who seemed mesmerized by every word from these startup legends. 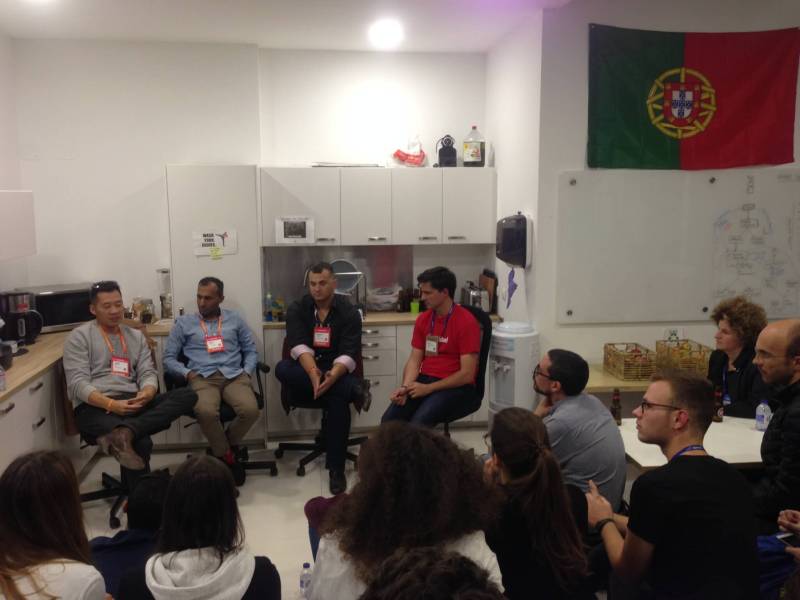 Silicon Valley had come to Lisbon’s doorstep, just the kind of thing Portugal’s government and local tech boosters had hoped would happen when they convinced the organizers of the Web Summit to relocate their massive tech conference from their hometown of Dublin. Year One can be considered a smashing success, both for a conference that caught a second wind and for a city that has at last attracted the global startup spotlight.

But buzz was not the goal, just the beginning of a bigger plan. A country with an economy stuck in neutral and limited horizons for its youth, Portugal is hoping the Web Summit will be a catalyst that transforms a young tech ecosystem into an innovative job-creating machine. In the wake of the conference’s first year here, local boosters are optimistic they’ve at least taken a first, gigantic step toward this ambitious future.

“The perception of Portugal has changed a lot,” said Maria Miguel Ferreira, an advisor to Portugal’s Office of the Secretary of State for Industry. “With the Web Summit, we’re able to show the world what’s going on here.”

A country on the edge

Countries across Europe are turning to tech as a way to boost their economic engines. But Portugal’s situation remains more troubled than most on this continent of sluggish economies.

In 2011, Portugal received an $85 billion bailout from the European Union and IMF in the wake of a global financial crisis that left its economy teetering on the brink. As is typical in such cases, the lending terms required massive government spending cuts and banking reforms. The result was austerity that squeezed average citizens and sent unemployment soaring to 18 percent by 2013.

Portugal has exited the bailout process. But unemployment nationally was still 12.5 percent last January, and around 30 percent for people under the age of 25. The country’s budget deficit remains high, and analysts have warned that its banking system is still a mess and its economic future uncertain. The European Union currently forecasts that Portugal won’t recover all the jobs it lost during the economic crisis until at least 2025.

Amid this turmoil, the government of Portugal successfully convinced the Web Summit to choose Lisbon as its new home for at least three years. The international tech confab had outgrown its Dublin home, and Lisbon offered a much larger venue in a relatively low-cost city with better weather.

“You will have great enthusiasm,” Portugal’s then Deputy Prime Minister Paulo Portas said at the Web Summit in November 2015 when the selection was announced. “You will have a city committed to innovation and a startup environment.”

Lisbon has been barely a blip on the international tech radar thus far. But it can boast that its startup scene has begun to gather some momentum in recent years.

According to a report released last year by the European Commission, Portugal had 40 startups that raised more than $1 million in venture capital over the past five years, for a total of $166 million among them. Another 24 startups bagged funding under $1 million.

Just under half of these startups are based in Lisbon, and about 25 percent are in the city of Porto. And, like many European countries, Portugal likes to count its diaspora of entrepreneurs, which include native son José Neves, who founded U.K.-based unicorn Farfetch. And there are a host of other startups, such as Feedzai, Talkdesk, Veniam, and Musikki, that started in Portugal but have since moved their headquarters abroad.

One of the more notable is Codacy — with offices in Lisbon, London, and San Francisco — winner of Web Summit’s 2014 pitch contest.

It was this emerging scene that intrigued Ines Dartiguenave when she arrived in Lisbon two years ago from Paris on a temporary assignment for a communications firm.

She saw so much potential she decided to stay and took a job running events at Beta-i, a Lisbon accelerator founded in 2010. Among its many efforts, Beta-i is organizing its fifth annual Lisbon Investment Summit next June.

“It’s a very international city,” she said. “It’s very inexpensive, so your burn rate is low and your investment will go a long way. It’s a small and emerging ecosystem with a lot of creative people. You can feel that things are really changing.”

Portugal is not Silicon Valley

Nobody in Portugal is under any illusion that a single tech conference will solve its deep-seated economic issues. And it’s unlikely the tech economy is anywhere close to creating enough jobs to have an impact on the employment rate.

Still, the country did its best to seize its startup moment from the very opening of the weeklong conference. Throughout the city, visitors were greeted by billboards that said “This is not the New Berlin” and “This is not the new Silicon Valley.” 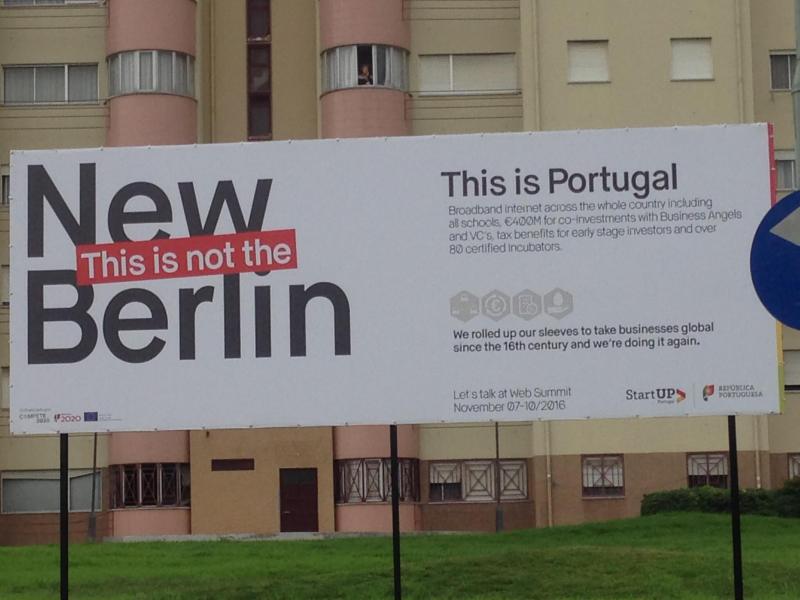 A Venture Summit held on the day before the start of the official conference drew more than 600 venture capitalists from around the world. To kick the day off, Portugal’s Prime Minister António Costa announced that the government had created a new public fund of $220 million that will match any private venture capital invested in the country’s startups. The fund is called 200M (it’s 200 million euros) and is part of a larger effort to pump $440 million into the country’s emerging technology economy over the next two years.

The next day, Costa appeared on the main stage of the Web Summit in a stadium of 15,000 people to deliver his own pitch for the nation’s ecosystem.

“I want them to remember Portugal as a dynamic, progressive, and open-to-business country,” he said to Web Summit cofounder Paddy Cosgrave on stage. “During the next two days, Lisbon will be the world’s capital of technology.”

While 46,000 people arrived from out of the country for the event, about 7,000 from Portugal were allowed to attend through either free or reduced-price tickets so they could rub shoulders with the tech community. In addition, 66 Portuguese startups were selected, which gave them free admission, a two-day startup bootcamp, and the chance to pitch in front of international investors.

Now that Web Summit has ended, the national government is trying to capitalize on the momentum by rolling out a series of new initiatives before the event returns next November.

Most of these will be organized by Startup Portugal, an organization launched this year by the national government to oversee its four-year tech startup initiative. This includes various mentoring and subsidy programs, a seed funding program that will be announced in January, various hiring incentives, and marketing efforts to help Portugal’s startups attend large tech conferences to get more visibility.

The hope is that with all the companies starting to germinate, the company can encourage more success stories like Unbabel. Cofounded in 2013 by Vasco Pedro, who holds a PhD in language technologies from Carnegie Mellon, the company now has 40 employees. It’s developing an approach to translating large amounts of information and documents for enterprises, using artificial intelligence.

The company launched in Lisbon, but became the first Portuguese startup accepted into the Y Combinator program in 2014. It has its headquarters in San Francisco now, but the bulk of its employees are in Lisbon. Early last month, the company announced it had raised $5 million in venture capital, bringing its total to $8 million, a sniffle for Silicon Valley but a huge amount by the standards of this country.

Following the Y Combinator partners’ visit to Unbabel’s offices during Web Summit, Pedro paused for a moment to consider just how big this moment could be for his native country.

“The energy here this week has been great,” Pedro said. “We wanted the world to see what’s happening in Lisbon. I’m feeling very bullish about the future.”