Project Starling is a collection of photos documenting 78 days in the recent U.S. presidential transition. The project uses a variety of technological solutions to verify the authenticity of the photos — including those of the Capitol riot.

The images are important because the stakes around the integrity of this past election are so high, Silicon Valley producer Jonathan Dotan, a Stanford fellow who cofounded Project Starling, told VentureBeat in an interview. The work is doubly important today as the U.S. Senate continues with the second impeachment trial of Donald Trump, which largely hinges on whether he incited the Capitol insurrection.

“There is deep concern from everyone in this process that the 78 days very much encapsulated the difficulties that we are having with trust in our digital era,” Dotan said. “I don’t think we could have anticipated how the 78 days were going to unfold, but we knew they were going to be charged. There were historic moments in which the veracity of any information during that time was very much in question. And I think there’s one thing that everyone can agree on is that creating more trust in our news sources and in our journalism is important, no matter what side of the aisle you’re on.”

Launching today, Project Starling is a joint effort from the University of Southern California Shoah Foundation and Stanford University with Reuters.

These groups collaborated with tech companies — including Adobe’s Content Authenticity Initiative, Filecoin, and Hedera Hashgraph — to create the Photographic Archive of Trust. The prototype, which combines technological solutions to verify the authenticity of images, documents the days between the 2020 election and Inauguration Day. 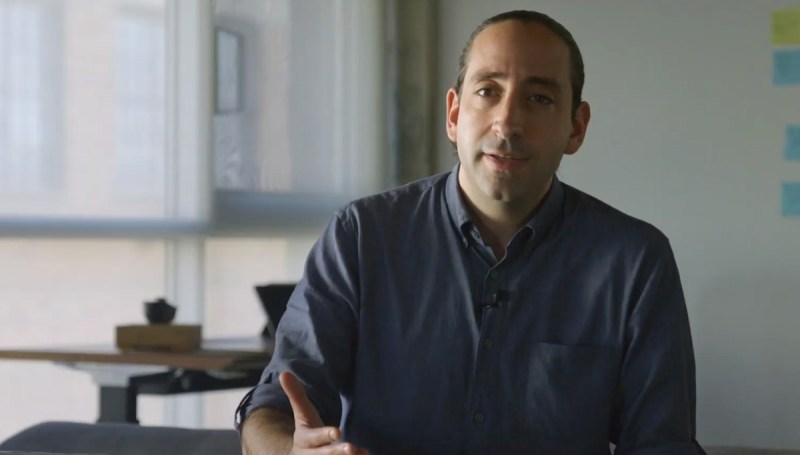 Above: Jonathan Dotan is cofounder of Project Starling.

“With trust in the media at historic lows, journalists have increasingly come under attack for doing their brave and vital work,” Dotan said. “This archive shows us a path we can take to help restore trust in digital media and allow readers to come to their own informed conclusions. As they do, they’ll have the benefit of sourcing information from diverse sources and backed by cryptography and distributed systems to ensure that from a camera lens to a digital front-page news story, each photo can remain intact.”

The archive showcases photos taken by professional photographers at Reuters.

USC Shoah Foundation executive director Stephen Smith added in a statement, “History has shown us time and again the dangers of misinformation. The Holocaust did not begin with death camps and gas chambers; it began with a calculated effort to undermine a free press by eroding the people’s trust in it. USC Shoah Foundation is proud to be part of a 21st-century solution to this ageless problem.”

The images have metadata that is committed to a blockchain — the blockchain alternative tech created by Hedera Hashgraph — which can quickly record data in an immutable fashion. It lets anyone check the provenance of an image and access immutable information, including a timestamp, where the image is stored, and a verified edit history.

Above: An image of the Capitol riot.

“There are a number of different technologies that we’ve used. And that was purposeful because we certainly are not trying to be working with decentralized technologies or create a defacto centralization, like some ledger of truth,” Dotan said. “That would be quite Orwellian. Instead, the goal is really to take a variety of advanced distributed ledger technologies and see how each of them could do different things.”

The archive takes the photos from the Reuters photographers and commits them to several blockchain ledgers, allowing anyone to check the provenance of the image. The archive has 250 verified photos, including unaltered photos from the day of the insurrection.

“Restoring faith in online content is important now more than ever, and we’re thrilled to see Project Starling apply the Content Authenticity Initiative’s standard to its photo archive project,” Adobe executive VP Dana Rao told VentureBeat in an email. “Partnerships like these demonstrate the impact of the CAI, and we look forward to continuing to build strong alliances across hardware, software, publishing, and social media to help society move forward in restoring our faith in facts and content.” 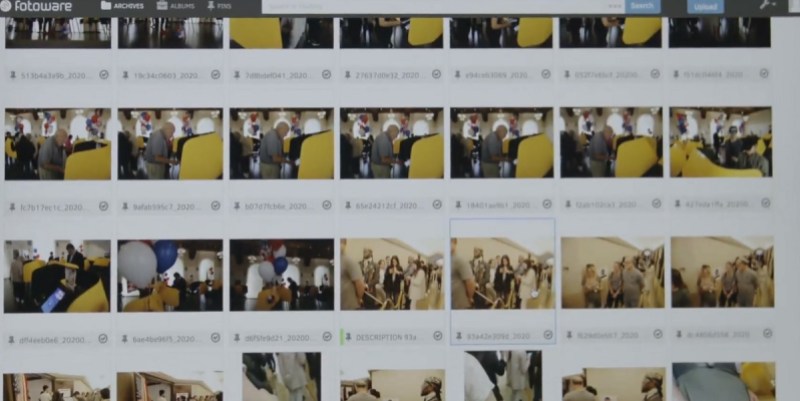 Above: Metadata on the Reuters images.

On the tech side, the coalition includes the Adobe-led Content Authenticity Initiative — a cross-industry collaboration to develop an industry standard for content attribution. It includes Filecoin, the world’s largest decentralized storage network that works well with permanent storage of images. It also includes IPFS, the peer-to-peer hypermedia protocol designed to make the web faster, safer, and more open. And it uses Hedera Hashgraph and the HTC/Numbers Protocol, which brings blockchain technology to mobile devices and the cameras associated with them.

Some of these systems use blockchain, a digital ledger that was introduced to the public via Bitcoin. The underlying principle is that there is no central authority controlling a single ledger. Everyone who is part of the system controls a decentralized and shared record. A blockchain is a relatively new kind of database that is becoming the solution for storing digital information more securely.

Hedera is a decentralized public network on which developers can build secure, fair applications with near real-time finality. The Hedera Consensus Service (HCS) acts as a trust layer for any application or permissioned network and allows for the creation of an immutable and verifiable log of messages. Application messages are submitted to the Hedera network for consensus, given a trusted timestamp, and fairly ordered. Built for tracking things, Hedera uses an alternative to the blockchain that achieves some of the same security but also functions much faster. So it was useful in getting the metadata onto the secure and permanent network as quickly as possible.

The photos are archived using a distributed cryptographic system for safekeeping. With technology from the Content Authenticity Initiative, users can easily see secure attribution data for each digital image through a next-generation user interface and file standard led by Adobe and cofounded by the New York Times and Twitter.

Anyone with an internet connection can access the archive and the immutable information within each image description. With conspiracy theories and deep fakes rife on social media and the public’s increasing reliance on social media platforms as a source of news, providing a tool to verify the authenticity of digital content is crucial to counteracting the manipulation of information.

Each image was first committed to the Hedera Consensus Service (HCS). The image was then cryptographically hashed using IPFS, creating a content identifier (CID) that serves as a unique fingerprint of that image, and hosted on a distributed server. Instead of being location-based, IPFS addresses a file based on its contents. The content identifier is a cryptographic hash of the content at that address. The hash is unique to the content it came from, even though it may look short compared to the original content. It also allows you to verify that you got what you asked for — bad actors can’t just hand you content that doesn’t match. Because the address of a file in IPFS is created from the content itself, links in IPFS can’t be changed.

Images are uploaded and stored on Filecoin’s decentralized cloud network. Filecoin provides a continuous record to show that files are secure and have not been tampered with. Using the new CAI standard for image attribution, anyone can view the image archive and check its provenance using immutable information, including a timestamp, image storage data, and verified edit history. 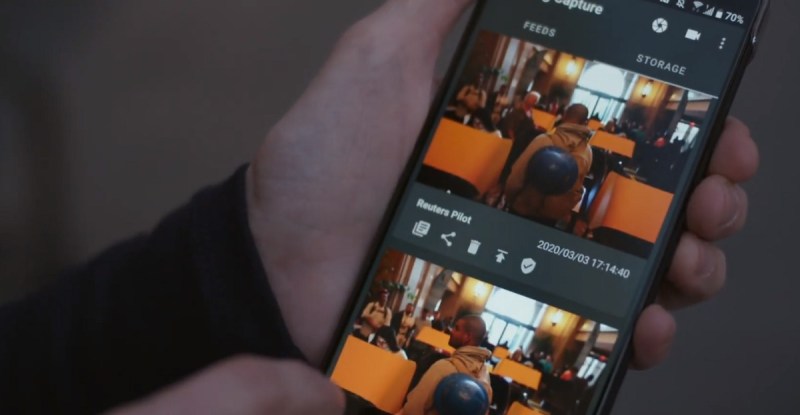 Above: Hashing an image on a smartphone.

Dotan worked with the USC Shoah Foundation on a virtual reality project dubbed The Last Goodbye, which used photogrammetry to document a concentration camp in Poland. He asked the foundation’s chief technology officer where the foundation stored its data and found it was spread across three datacenters. But Dotan knew that wasn’t enough to ensure a truly distributed and decentralized system of storage.

“We began with has been now two years’ worth of work in evaluating a variety of methods to first store the existing information that we have, and the Shoah Foundation’s archive,” he said. “As our work developed, we realized we could now create a system from a camera lens that could begin the process of authentication at the source. Then we could move the image into storage and handle each one of the steps [to] capture, store, and verify.”

Over the past year, the group started working with Reuters, which had an early enthusiasm for using the tech.

“It was at the recommendation of one of their photographers that we deploy some pilots during the California primary,” Dotan said. “That allowed us to [test] in March how we could really do this in the field. And then by the time the inauguration rolled around, we were able to put the system into action.” 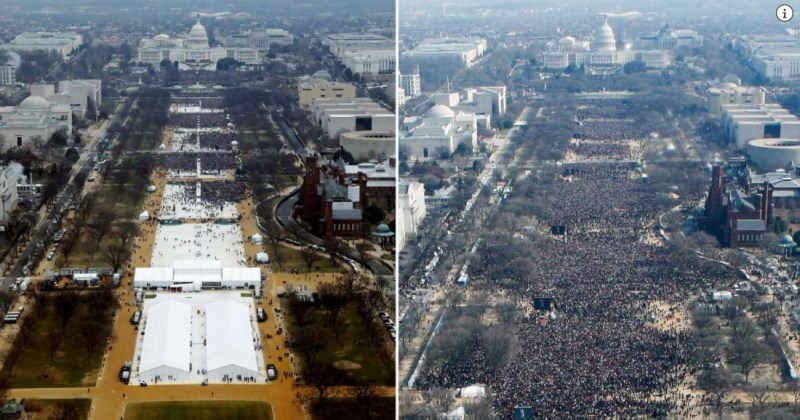 Above: These images led to the dangerous rise of alternative facts.

“This is definitely not a silver bullet,” Dotan said. “This entire project was meant to explore a variety of methods to secure things.”

The technology raised questions that were tough to answer. If you timestamp something with a photographer’s location, you don’t want someone to be able to use that data to get surveillance on the photographer. And if you could encrypt the images on a camera as photos are taken, then there isn’t as much risk if the camera is stolen.

If you remember back to the first day of the Trump administration, when spokesperson Sean Spicer disputed the veracity of photographs of the inauguration crowd, the need for this kind of veracity has been evident for a while.

“There are ways that we can contribute to creating clarity and lowering uncertainty around the photos,” Dotan said. “What people do with that I think is still a matter of civics, frankly.”